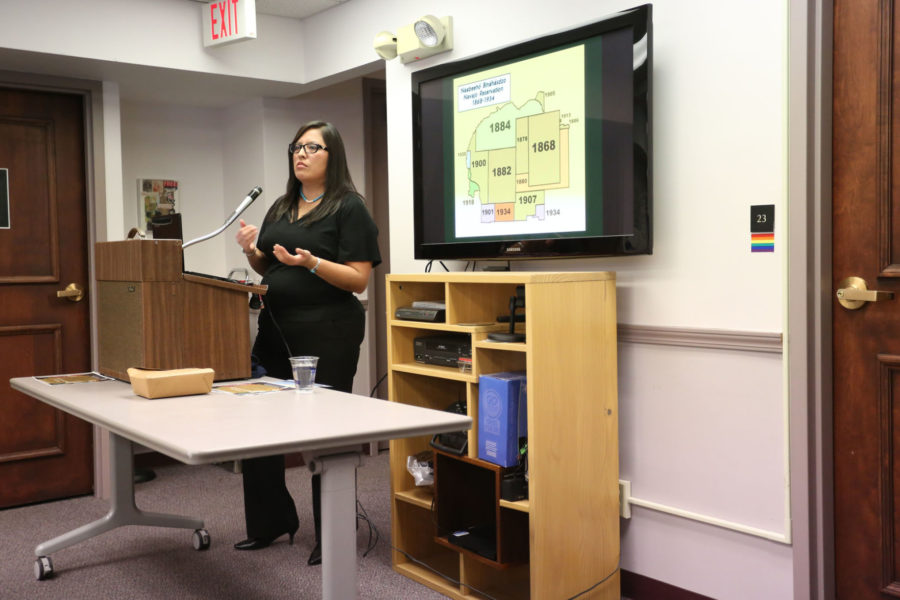 “Education is the ladder, my children take that ladder.”

The quote is from Chief Manuelito, a principal war chief of the Diné tribe in the 1800s, citing the Navajo Treaty. Smith, assistant director of the Native American House since September 2011, was brought up on this conviction and has carried it with her since.

Though her beliefs have weaved their way into her life in unexpected places, she still carries this quote along with the idea of “Walking in beauty, walking in balance,” a phrase that resonates with meaning and history to the Navajo philosophy.

“Those were the overarching themes of my childhood. … Those two principles related to my identity and being resilient and being self-sufficient,” Smith said. “It means living happy, living healthy and being balanced.”

Smith hosted an event on Monday entitled “Through the Eyes of My Ancestors: One Woman’s Navajo Narrative” at the Women’s Resource Center. Her discussion took students and faculty into her experience finding herself, including how she learned about her identity and where she comes from.

“Knowing where you come from and who you are, you’re able to have that resilience in any kind of environment,” she said.

Smith is a member of the Diné tribe, a word that translates as “the people” in Navajo. The Navajo are one of the biggest tribal groups in America and they have reservations located in parts of Colorado, Arizona, Utah and New Mexico.

“My experience as a native woman is very different, but I mean, that’s just it,” said Yvonne Tiger, office associate for American Indian Studies. “We have such varied experiences and that doesn’t make us any less native, especially those of us that identify and strongly adhere to our traditions. I don’t think there is any one box you can fit us in. Speaking about herself demonstrated to (Smith’s) audience that there is no one way to be native, especially in this day and age.”

“I’m grounded wherever I am otherwise, but it is just more peaceful there (on the reservation). I don’t have any distractions of Internet or text messages or phone calls,” she said. “Things are simple there, I am more relaxed there.”

Smith attended a tribal college and university to earn her undergraduate degree in American Indian Studies.

If individuals can meet the criteria outlined by their tribe, they may be able to get a scholarship for college.

“We are the only race in the United States that have to defend our identity as an American Indian by being tribally enrolled; proof to show we exist, proof to our rights. There’s over 567 different tribes represented in the U.S. that does not include state recognized tribes and that doesn’t include American Indians who are not enrolled and indigenous people throughout the world,” Smith said.

The criteria and the process varies from tribe to tribe, but for the Navajo Tribal Scholarship, an individual has to be enrolled with the Navajo tribe, has to have graduated from high school and has to have taken a Navajo history or language class in high school to earn a certification, as well as be enrolled in a four-year degree program.

“In your classroom everyone would know each other’s tribes,” Smith said of her time in college. “It was a life-changing experience because I was able to get to know a lot of different tribes and learn about them and meet them. … I have lifetime friends from that.”

After college, Smith worked at a museum to experience how native culture is managed in museums. She also worked at AmeriCorps for two years and interacted with students from kindergarten through the graduate level. Her work ranged from after school programs for urban American Indian children to American Indian art programs. She then went on to receive a master’s degree in Education Counseling with an emphasis in Student Affairs.

After leaving her hometown in Arizona to pursue her doctoral degree at the University in the College of Education’s Policy, Organization, and Leadership higher education program, Smith said she found her way in a new environment with the support of her family and with the community that the Native American House fosters here on campus.

“It’s an open door policy (at the Native American House) … You can ask us anything you want,” Smith said.

The Native American House is hosting events throughout the month to educate students about Native American Heritage Month and to help students deal with identity issues that they may encounter on a predominately white campus.

In Smith’s lecture on Monday, she reflected on how she became educated about where she comes from. The lecture brought students from all over campus together to hear her unique story.

“I really enjoyed it and I really appreciate that she was comfortable and able to speak with us about her story, her ancestry and her background in such a personal way,” said Gabrielle Smith, a graduate assistant and volunteer coordinator for the Women’s Resource Center and graduate student in Social Work.

In a world where Native American identity is easily misperceived by others, Beverly Smith said she finds her strength in the values and customs that her family raised her to embrace.

“There’s a type of community that not only exists in Navajo culture, but in different tribes too, because they also have reciprocity,” Smith said. “I never disconnect myself from home, it’s a constant thing for me, it’s a principle — it’s a value … You always remember who you are.”

Darrah can be reached at [email protected].