Recruiting trail is labor of love for Groce, staff 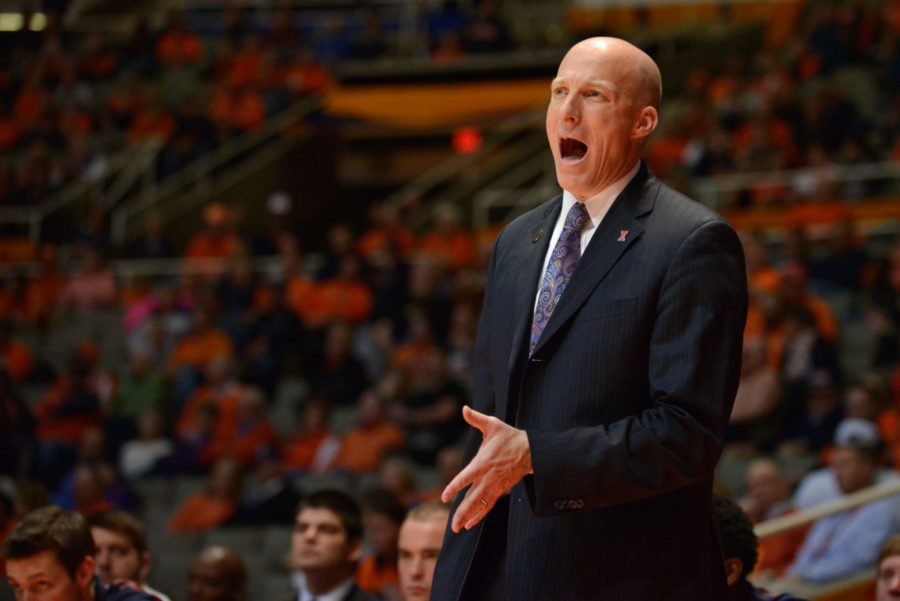 College basketball coaches spend that time of year under a microscope and bright lights as their teams play dozens of games per season on national TV. But every year, March eventually ends, and the lights dim until the following November.

For coaches, the end of the season is merely a shift in priorities, and it doesn’t mean it’s time to relax. For Illinois head coach John Groce and his staff, a long summer of recruiting awaits. It’s through the recruitment of high school talent that Groce builds the future of his program.

The month of July marks the beginning of a feeding frenzy for college coaches, as AAU tournaments are played all across the country. As September comes around and fall approaches, coaches must orchestrate visits with recruits, both on campus and in players’ homes. During this time of year, Groce and his staff take on a lifestyle that calls for most of their time to be spent in private planes, hotels and basketball gyms.

Illinois recruits with the big boys, as Groce and his staff have pursued some of the best players in the country in hopes that they will commit to the Illini. To do this, they must cast a wide net geographically in order to get in front of the best recruits. The top AAU tournaments are played in cities like Las Vegas, Atlanta and Chicago. In the past year alone, some of Illinois’ top targets have lived in Dallas, Cleveland and just outside Toronto.

Groce has implemented a strategy of relationship-building with his targets, which requires a large amount of face-to-face time with them. In order to grab players’ attention, Groce and his staff must hit the road hard.

He has three assistant coaches at his disposal — Jamall Walker, Paris Parham and Dustin Ford — who help him recruit on the road. All four of them criss-cross the country while recruiting, trying to form bonds with players, their families, their mentors and whoever else may be involved. So far, it’s been that effort that’s helped the Illinois staff get its foot in the door with some of the nation’s top talent.

“That’s how you build a relationship with a kid: trust,” Ford said. “And how do you get trust? By putting forth effort, communicating, seeing someone (play) and working hard. People respect that.”

Sometimes building that kind of trust requires Groce and his staff to go to incredible lengths to impress a recruit.

Carlton Bragg, a forward from Cleveland, is one of the best high school players in the country in the class of 2015. Groce and his staff first noticed Bragg when coaching at Ohio, and have been involved in his recruitment from the beginning. According to Bragg’s mentor, Michael Graves, at least one Illinois basketball coach has been at every single AAU game of Bragg’s in the last two years, a feat that has helped the Illini remain in the hunt for Bragg’s services.

Seeing as most top-flight AAU teams play 50 games a year all across the country, the staff must sacrifice much of its personal time in the summer to accommodate the schedules of top recruits. Summer days become a blur, as Illini coaches will visit up to four cities in one day while juggling recruits. The coaches often pass the time on plane rides catching up on sleep or watching game film.

For the Groce and his staff, every day becomes a game of “Where are they now?”

“I went to Dallas, then had to be up at 4:30 the next morning to catch a flight back to Bloomington-Normal. (From there) I had to drive back up to Chicago (then) drive back out to Waukegan (to watch a game),” Parham said of what a busy day on the recruiting trail entails.

Walker and Ford told similar tales of days spent in airports, rental cars and red-eye flights, all while attempting to make it back to Champaign for afternoon practice with the actual team. While the assistants are more likely to drive and take commercial flights, Groce has a private plane at his disposal, gassed up and ready to fly on short notice.

“We’re very blessed at Illinois,” Groce said. “The resources we have at Illinois are off the charts. The fact that I’m able to take a plane helps to get from spot to spot.”

Those resources allow Groce to bounce from city to city, always boomeranging back to Champaign in time for practice.

“You know, he’s the head coach, (the current players) need to see his face a lot,” Parham said. “He needs to be here for practice, he needs to be here to watch film. Having that plane for him is bigtime. He’s here no matter what.”

During the heat of recruiting season, Groce and his staff will meet once a week, when they schedule their practices, travel arrangements and visits with recruits. For them, the key words are balance and communication. In order to balance their schedules while managing the recruits on their radar, Groce and his staff keep clear lines of communication open every single day.

“It starts with John at the top,” Walker said. “He has us prepared to do what we need to do. It’s communication amongst all of us. It’s like we say, we’re one big family, so you’ve got to communicate what you’re trying to do. And everybody’s on the same page with what we’re trying to do on the court and in recruiting.”

The nature of recruiting takes its toll on each of the coaches, wearing them down occasionally. One of the biggest strains is put upon the coaches’ families. Groce, Walker, Ford and Parham all have wives and children. Though the regular season requires travel for games, it’s the summer that they are away from home most.

Their time with their families dwindles. A coach may only see his family one day a week. Last summer, Parham missed all 52 of his son’s AAU games because he was on the road recruiting.

“It’s hard,” Groce said. “It’s hard when you have an 8-year-old, a 5-year-old and a pregnant wife. My wife understands, she gets it. She’s an important part of our recruiting efforts, as are the other wives.”

Groce, his staff and their families have formed a support system between them that helps ease the burden of constant travel. Much like Groce stresses togetherness to his recruits and current players, there is a strong family-oriented culture within the coaches’ inner circles. After all, as Parham points out, you can’t sell your basketball program as “family first” if you’re not doing it in your own home.

While on the road, Groce and his staff try as much as possible to stay involved in the lives of their wives and kids. And when time allows the coaches to spend time with them, they make it count. Parham puts it simply: When the coaches are off, they’re at home.

Though recruiting season is a grind, it’s an aspect of the level of excellence Groce demands of himself and his staff. Groce’s work ethic in recruiting correlates directly with his inner drive, and that effort rubs off on his assistants.

Groce is attempting to establish the kind of culture he wants to instill at Illinois from the ground up. Groce and his staff pride themselves on being themselves.

It’s the nature of the recruiting the nation’s best players that a coach will be rejected more often than not. But it’s Groce’s ambition that the efforts of him and his staff will resonate with the players he’s trying to bring in.

“That’s who we are, and I would hope (recruits) would say that it’s genuine. My staff is that way too. I hire staff that way. My guys on staff, they love other people and they love ball. I think hopefully that shines through a little bit.”