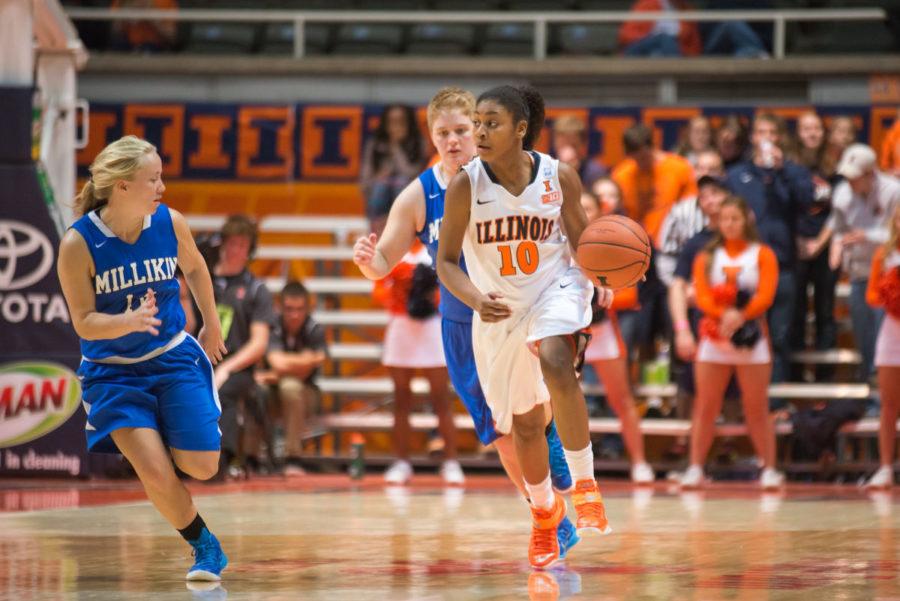 Illinois’ Amarah Coleman dribbles down the court during the exhibition game against Millikin at the State Farm Center on Nov. 8. The Illini won 108-38.

Entering only his third season at the helm of the women’s basketball program, head coach Matt Bollant has proved he can recruit at a high level.

That trend was continued on Wednesday, when three recruits signed their national letters of intent to join the Illini program next season.

“From top to bottom they’re all athletic, they all have toughness and they’re all really driven players, which will turn into really good college basketball players,” Bollant said.

In only his third recruiting class with Illinois, Bollant expanded his recruiting pipelines across the Midwest, and out of the country, too.

Bollant lured in two guards in Jaelyne Kirkpatrick and Cierra Rice. Kirkpatrick is rated as the second-best player in Canada from the 2015 class, and played for the U17 Canadian national team. Rice is ranked as the best player coming out of Michigan and the No. 66 player in the nation. Bollant describes Rice as one of the best defensive guards he and the staff saw while recruiting.

The third signee is 6-foot-1 forward, Alex Wittinger, the third-highest ranked player out of Minnesota. Wittinger may be the most athletic commit. She was recruited to play Division I college volleyball and also has qualified for the state track and field championships during her high school career.

Wednesday once again showed Bollant’s ability to recruit high-level players from across the country and why his program is seen to be on the rise. Bringing in such a highly rated class directly following a 9-21 season can’t be easy, but it further shows Bollant’s recruiting ability.

“We feel really good about all three of them, think they’re going to be impact players and have a chance to play for us as freshman and continue to raise this program,” Bollant said.