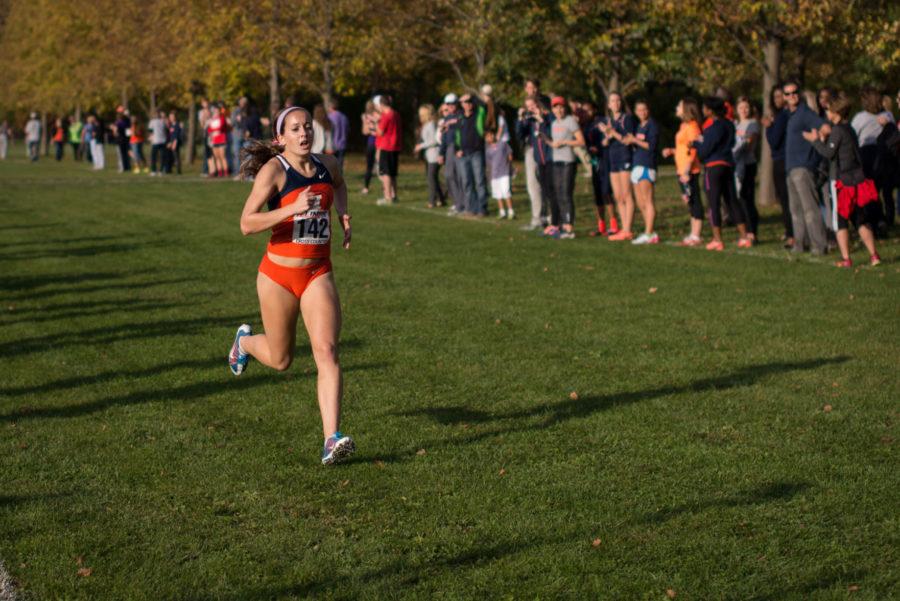 Illinois’ Colette Falsey sprints towards the finish line at the Illini Open 2014 at the Arborteum on October 25.

The Illinois women’s cross-country team is preparing for its next big meet on Friday, the Midwest Regionals, and has some things to prove to itself and to others.

The top-two teams and top-four individual finishers at the meet will receive automatic bids to the NCAA Championships in Terre Haute, Indiana, on Nov. 22, and head coach Scott Jones believes it will be a difficult task.

“As competitors, we want to be open to the possibility of making something good happen,” Jones said. “But we are probably a year away from being in a position to realistically be discussing qualifying for nationals.”

For Jones, winning is not at all what he is concerned about. Instead, Jones is hoping his team focuses on different elements of the race it can control.

His overall goal is for his team to run its first complete race of the year.

“Each individual on the team has had solid performances this season, but apart from the meet at Illinois State on September 12, we haven’t had everyone race well on the same day,” Jones said.

With two weeks separating races, sophomore Hanna Winter said she believes her team is focused more on training in hopes of finishing in the top four of the regional.

The Illini finished eighth at the Midwest Regional last season, a result that Jones hopes to improve on this season.

“Our extrinsic goal is to surpass that projection,” Jones said. “It will take a great collective effort. But coming from the Big Ten meet, we made placing in the top four our ambitious goal.”

The meet is hosted by Bradley’s Newman Golf Course in Peoria, Illinois. It will be the sixth time the regional championship will be held there.

The Illini are unlike other teams participating though, as they have won a race on the course: the Bradley Invite, in October.

Junior Alyssa Schneider said she is ready for the challenge, and added that, by coming together as a team, the Illini can make this meet a breakout performance.

Junior Colette Falsey said she’s excited and ready for another opportunity to show how much hard work the team has put in.

“We are ready to put it all together and have a great team race,” Falsey said.

The teams that the Illini beat in the Bradley Invite included South Dakota, Illinois State, Marquette and Saint Louis. Those four will be competing against Illinois on Friday.

Other notable teams running this weekend include No. 5 Iowa State and No. 20 Minnesota.

Coming off a strong performance at Big Tens, Winter said she feels she has the confidence to give another great performance come Friday.

“(It) gave me confidence in myself and showed me how my training over the past couple months has paid off and prepared me for this point in the season,” Winter said. “I hope this performance carries over into Regionals and allows me to have another great race.”

Alex is a junior in Media. He can be reached at [email protected] and on Twitter @awallner93.