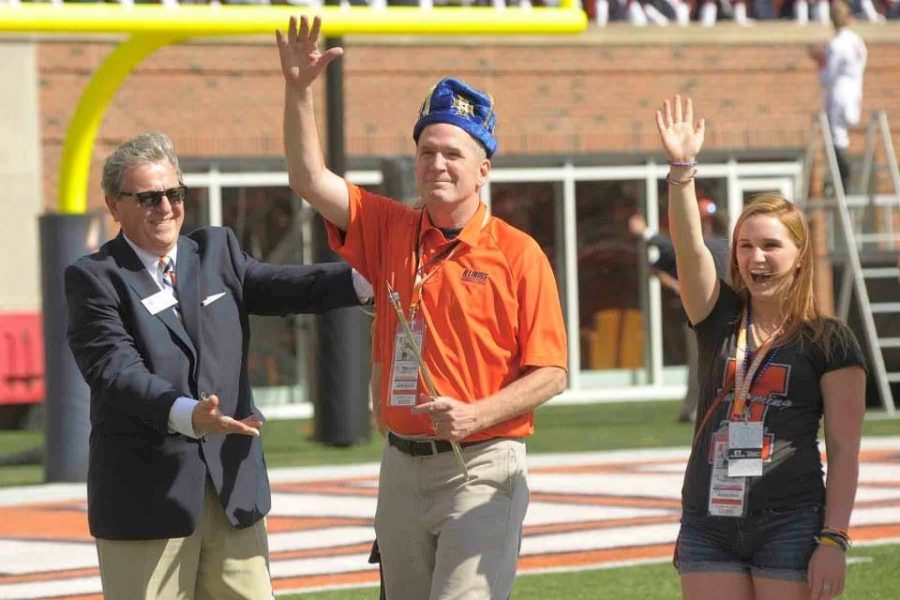 Fathers may call their daughters “princesses” and treat their children like royalty, but not many children get the chance to call their fathers a “king.”

The King Dad Award is awarded every year to one father who shows exemplary support for their children, and gives his sons and daughters a chance to crown their dad “king.”

The process of choosing King Dad begins each year with students nominating their fathers by writing essays describing what their father means to them, J.B. Bailey, program advisor for Parent Programs, wrote in an email.

“Students are urged to consider such criteria as their father’s unique way of showing his love, how their father shows his commitment to his role as a father and how he is a role model of honesty and patience,” he said.

This year, 29 dads were nominated for the award. The nominees are narrowed down by the Dads Association Board. Then, each of the 18 members of the board of directors reads the essays and ranks them, according to Mike Muscatella, member of Dads Association Board of Directors and chairman of the King Dad event.

“I had a hard time picking (this year),” he said. “They were all excellent essays.”

The new King Dad will be announced at the Illini Union on Friday at 5 p.m. The ceremony will also feature performances by two A cappella groups, “No Strings Attached”and “Surround Sound,” according to Muscatella.

The winner will be awarded a $100 gift card for the Illini Union Bookstore and will be crowned on the field during halftime of the football game against Iowa. He will also be honored during the Dads Weekend tailgate.

Muscatella said he enjoys being on the committee that gives the award, because it allows him to recognize the greatness of dads at the University.

“There are so many great dads,” he said. “It’s an opportunity to recognize a couple of them and how much they contribute to the students’ education and formation.

There is not one specific type of “King Dad,” though.

“The King Dad winners of the past have occupied the entire spectrum,” Bailey said. “We’ve had successful business owners, some working third-shift manufacturing jobs and some working multiple jobs to make ends meet. We’ve had dads who were still married to their high school sweethearts, dads who had been divorced multiple times and dads who were widowers.”

Despite the difference in their individual lives, one trait in King Dad nominees is their devotion to their children.

Muscatella said he believes that the King Dad should be a dad who is supportive of his child’s academic and social life and is also a good role model.

“The one common trait they all share is a dedication and commitment to their children,” Bailey said. “They have done all that they could to provide their children with the tools they need to be successful.”

Last year, the winner of King Dad was Jack McDermott, a father of four daughters, three of whom were students at the University last year. His oldest daughter, Darragh, wrote the essay to nominate him.

“I think what qualified me was their appreciation for all the support that my wife and I give them in their academic and athletic pursuits,” McDermott wrote in an email.

Jack’s fourth daughter, Fiona, is a junior in high school at Lincoln-Way East.

“I enjoy being on campus, cheering for them and doing things with them when I am down there. They know I am their biggest fan and a huge fan of the University of Illinois and the Fighting Illini,” he added.

While McDermott has been a supporter of his daughters’ athletic careers, he said he was not expecting to win the award last year.

“I was surprised I won, because I think all dads deserve some recognition, and I didn’t think I had done any more or less than a lot of dads,” he said.

He said his daughters enjoyed the process, and he was happy to be a part of it too.

As the new king is soon to be crowned, McDermott has a piece of advice for the nominees: “Enjoy Dads Weekend and enjoy the time spent with their daughters during their college experience.”