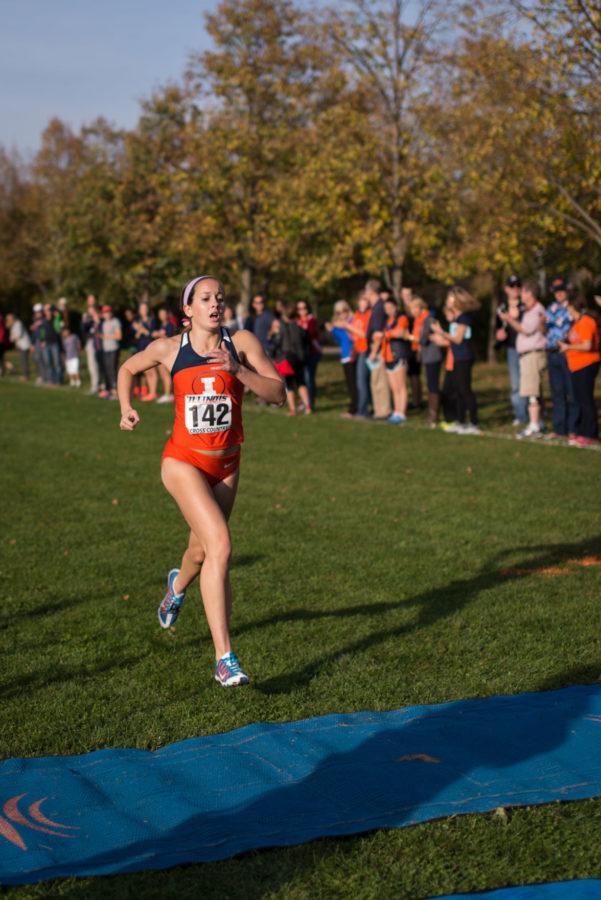 Illinois’ Colette Falsey, junior, earns first place at the Illini Open 2014 at the Arborteum on Oct. 25. The Illini did not qualify for the NCAA Championships.

The Illinois women’s cross-country season ended with a 10th-place finish at the 28-team Midwest Regional on Friday.

Only the top-two teams and top-four individuals qualified for the NCAA Championships, neither the Illini as a team nor any individuals made the cut.

No. 5 Iowa State won the meet with 66 points and No. 20 Minnesota finished second with 125 points.

Alyssa Schneider was the top finisher for the Illini, placing 33rd with a time of 20 minutes, 59 seconds. Amanda Fox finished 48th for Illinois with a time of 21:12 and Colette Falsey placed 59th at 21:23.

“I thought the race went out at really good pace, but picked up quickly at the 1K,” Winter said. “It was tough, but our team worked really well together and performed as we were expected to.”

Coming off a difficult performance at Big Tens, Winter said she believed the middle-of-the-pack finish the team earned at Regionals was expected.

“I was also very confident in my teammates that we could go out there today and give it our best effort,” Falsey said. “We really wanted to focus on working together as a team throughout the race and I think for the most part we did a good job of that. Cross-country is a team sport.”

With three team wins and a single individual title for Falsey, the Illini improved on last season’s single-win campaign.

The Illini are only losing one runner from this season’s team, Schmidt, and with everyone coming back, Falsey said that she believes 2015 will be a good season.

“I think we are going to continue to work on getting better at running together in races and pulling each other along when the race starts to get tough,” Falsey said after the season ended. “We obviously want to continue setting high goals and expectations for the program. We have a group of very talented and hardworking girls and the ability to do something really special.”

Schneider said that next year, her final season, poses an opportunity for both her and the entire women’s cross-country team.

“I always set higher expectations for myself after a season ends,” Schneider said. “I think that as a team we have a lot of potential that hasn’t been tapped into yet. We are all striving to come back stronger next year.”