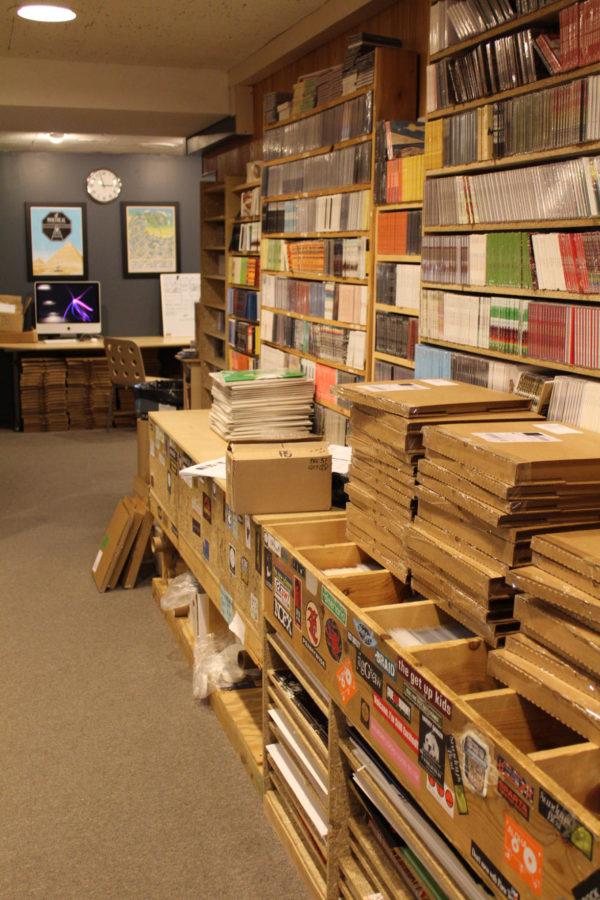 It all started in 1994 with two high school sweethearts, a love of music and Polyvinyl Press, a self-published mini-magazine (“fanzine”) about local, underground music.

At the time, Matt Lunsford and Darcie Knight were two high school students living in Danville with an appreciation for the DIY music scene. That music scene consisted of a self-sufficient music culture, free from labels and mainstream ideologies in Champaign-Urbana and the greater Midwest. The fanzine quickly gained popularity and was found in record stores, house show merch tables and other zine writers’ mailboxes across the country.

With the DIY community having such a large pull for zines in the 1990s, Polyvinyl Press segued into their strong relationships with various bands and influential individuals.

Lunsford and Knight’s countless hours spent writing about their favorite local bands eventually evolved into releasing a 7” split, or an album which includes tracks by multiple artists. It was included with their third issue of Polyvinyl Press. A year later, the two released a 20-band compilation, “Direction,” and Braid’s first 7”, “Rainsnowmatch,” just two of several products representing Champaign-Urbana’s local talent.

The label has now evolved into a staple in today’s indie-alternative music industry whilst remaining completely independently owned and operated in downtown Champaign.

Managing over 50 artists and over 300 album releases, the label has transformed into a powerhouse due to its highly coveted roster among other labels and by keeping the art of vinyl long-lived.

In addition to its roster and record releases, Polyvinyl is extending its success in another musical realm in January, the release of a monthly yearlong subscription of singles on vinyl entitled, “Polyvinyl 4-Track Singles Series.”

The series, a Polyvinyl trademark, had its first run earlier this year as an experiment of sorts with no postulation of high success. While it was originally limited to 500 subscribers, high demand led to a 2015 Volume 2 release and increased the subscriptions to 1,000.

The idea behind the Single Series came from label manager Seth Hubbard, who runs the satellite office in Berkeley, Calif.

“The way it went down was 3 years ago when we were running a Kickstarter for the Of Montreal documentary,” Hubbard said. “A reward if you backed the project was receiving a limited edition vinyl release, which was recorded on a Tascam 4-track cassette recorder. After that, we had this recorder just sitting there so I thought why not take that 4-track, ship it to a bunch of different bands and make a record out of it?”

And that’s exactly what Polyvinyl did.

Polyvinyl ships the single recording device to one artist, and the artist records two songs with no requirement; it can range from a brand new song, rendition of older material or they could record a cover. From there, the artist sends it to another artist until the series has been completed.

Each artist on the Series is specifically chosen by Polyvinyl, but the majority are not signed to the label.

Just a few of the artists participating in the Series are The Dodos, Kishi Bashi, Ducktails (of Real Estate), Jonathan Rado (of Foxygen) and Telekinesis, along with seven other artists.

The recorded songs are exclusively for the Single Series subscribers and the only way an outsider can catch a listen is if he or she has the vinyl itself; not even Spotify can snag this compilation.

“There’s a lot to be said of serious people who collect records; they want exclusive, limited editions,” Hubbard said. “There are people who really care about their record collecting and want to know how many records were made, the color and even the weight of the record.”

To the average vinyl buyer, the specificity could seem excessive, but the Series is for the collector who lives and breathes vinyl. Every aspect that goes into the creation of the Series is specified towards collectors who notice every detail. Even the record jacket has significance — the unique artwork is by Grammy-nominated artist Jesse LeDoux.

“The album art was a big deal for the series. Post-mark stamps were a big inspiration for the whole thing. It was a really cool, branded collection where fans of the label could purchase this series not knowing who all of the artists are,” Hubbard said. “We wanted to make sure what we’re putting out looks and sounds as best as it can. We put it out on colored, 180-gram vinyl because it looks and sounds the best, which is what we want for the people that purchase it.”

Frances can be reached at [email protected].