The hands behind the venti extra-foam latte 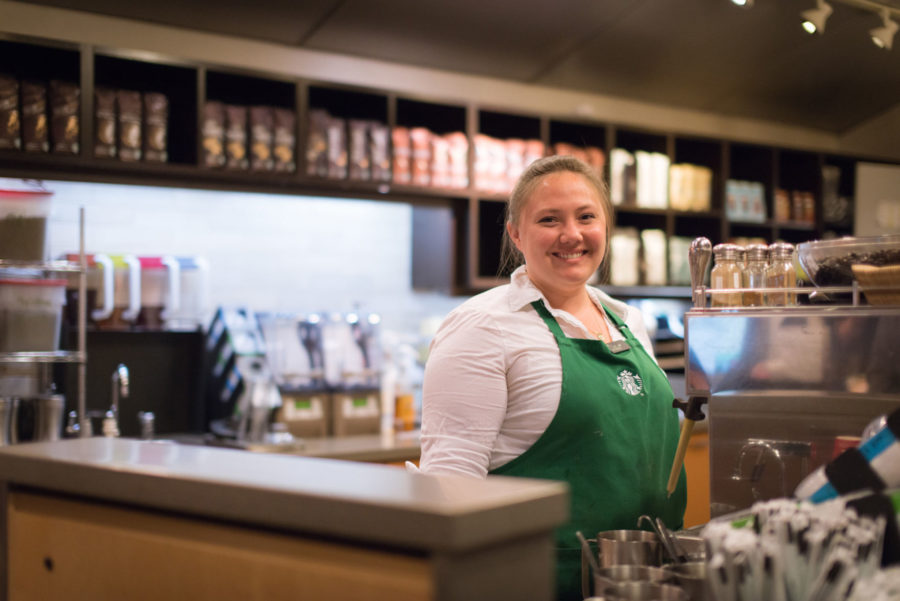 Clair Brendel wakes up at 5 a.m. to make the morning shift at 6 a.m.

At the campus Starbucks on Green Street, Brendel, a senior in Social Work, sets up the pastry case and espresso machines for the caffeine-deprived students to stumble in bleary-eyed for their morning caffeine wake-up.

“I was never really a morning person,” she said. “I don’t mind working if I’m around morning people — people who want to get up and get their coffee before work are excited to start their day.”

Two shots of espresso also helps Brendel with the early morning start. But she stays peppy throughout her shift because she wants respect and kindness from her customers, so she treats them the way she wishes to be treated.

It’s the Saturday of Dads Weekend, and Brendel is working the morning shift with her supervisor, Ethan Fluhr. Even though it’s just past 6 a.m., customers are steadily entering into the store, warm and filled with the aroma of coffee and steamed milk. The muted rock of The 1975’s song, “The City,” plays in the background as the coffee machines whir to life.

Brendel’s plan wasn’t to become a barista, but she knew she wanted to work for Starbucks at least once during her lifetime.

“I decided I wanted to work with Starbucks. A lot of it deals with policy and how they treat employees. There are a lot of benefits, social actions, outreaches and fair trade. Those are all values of my major (social work),” Brendel said. “There’s free coffee, I work with great people and there’s flexible hours. This built up to be the place where I wanted to work.”

In her two years at Starbucks, Brendel has worked all the shifts and positions at the coffee shop. But she said she enjoys working at the bar and register the most because of the customer interaction.

“Professors come in outside of the classroom setting and talk about what they like to teach and what they don’t like. They talk about political opinions, musicians, artists; they ask me about my love life,” Brendel said. “I also met people on the Homecoming Court because they’d all come to Starbucks.”

Megan Anstrom, one of Brendel’s supervisor, said she appreciates Brendel as a staff member for the past one and a half years they’ve worked together.

“She’s always friendly to customers, always has something interesting to talk about with a smile on her face. She’s also really fun. Customers will ask when Clair and Megan are working together,” Anstrom said.

From a small town of 7,000 people, Brendel’s conversations with her customers makes her feel more at home on a campus of over 40,000.

A line begins to form at 7:30 a.m. as customers stream in from the light snowfall outside.

Fluhr and Brendel have a good rhythm going behind the counter between their playful banter. The orders of fat-free vanilla lattes and peppermint mochas start coming in a flurry. Students and Dads Weekend visitors filter in and fill the seating area wall to wall. Brendel brings one male customer his drink as he reads a newspaper at his table.

Now as a experienced barista, Brendel has memorized customers’ orders, from the woman who orders a venti caramel macchiato with whipped cream every morning to the man whose venti decaf coffee needs to be freshly brewed or he won’t take it.

Leslie Schulke, junior in FAA, has worked with Brendel for the past two years.

“She’s cheerful and always makes customers feel at home and welcome in our store,” Schulke said. “She’s the queen of coming up with new drink combos.”

While Brendel has a good memory, she does say that students’ orders can be trickier to keep in her mind.

“Students are hard to predict. If they have a test, they may want more shots of espresso,” Brendel said. “When they have different schedules, the orders change more.”

As more families file in, Brendel talks about her own family with them as Frank Sinatra takes over the cafe speakers. Fluhr stacks more of Starbucks’ red holiday cups in anticipation of more morning customers. It is still only 8:30 a.m.

The job requires planning in advance, and Brendel has developed ways to handle stress though the position.

“It took a lot of time. It involves being a couple of steps ahead. If you just focus on how busy you are, you run out of cups, milk and lids and wonder how you got there. If you focus on what’s around you it gives you an idea of what you need to do. For me, singing and dancing also helps me de-stress,” she said.

Her mental process really begins the night before work, when she goes to sleep seven or so hours before. She packs her backpack with books and a change of clothes for class and maps her route from work to school.

While her days at work don’t usually vary, Brendel admitted she has some standout experiences.

“My first year that I worked, I worked with a girl who was very no-nonsense. She took the condiment bar and barricaded the bathroom so no one could come in and use it,” she said. “Then last year for Unofficial a really drunk girl had been at Cold Stone and had wanted them to sing, but they didn’t sing so she came to Starbucks and asked and I sang ‘Let it Go’ and got tips from that.”

Brendel has worked at other Starbucks locations around Champaign-Urbana, but she loves the Green Street store the best.

Compared to  the older crowd on Vine Street and the working-class crowd on Prospect Avenue, the lively Green Street location uses less decaf and Splenda. But as a company, Brendel also likes how Starbucks varies from other coffee shops.

She said that the strict uniform and how conscious the staff has to be with customer interactions are large differences.

Based upon sales last year, Brendel said the Green Street store’s Frappuccino Happy Hour was number one in the state for frappuccino sales as well as number three in the nation. She said Dads Weekend, Homecoming and sports camps over the summer draw in large amounts of customers.

Approaching 10 a.m., Brendel talks to Fluhr about going to the football game after work. Any Iowa fan who steps though the glass doors prompts Brendel to say they are in the “wrong territory.”

Five minutes before Brendel’s shift ends, Illini Men’s Basketball Coach John Groce comes in and says hello, greeting Brendel by name. Groce tells Brendel about how the team could have played better in its 80 to 71 win over Georgia Southern on Friday. When her shift is officially up, she stays an extra five minutes to help with a sudden influx of customers. But she soon hangs up her green apron and pulls on her coat to walk out onto Green Street herself, amongst the students and Dads Weekend visitors heading to the football game.

Mara can be reached at [email protected].