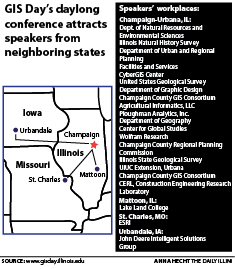 The practice of mapping started approximately 16,500 years ago in central France, where prehistoric people painted the stars in cave walls. These were humanity’s first mapmakers.

Since then, cartography and map mediums have evolved from cave walls to clay tablets and finally from paper to digital forms.

Today, there is GIS, or Geographic Information Systems, which has been recognized for the past few decades. GIS is a computer-based system that can process data organization, analysis, management and more in the form of visual maps.

Since this system is so widely used in different disciplines and fields, the University is holding GIS Day, a daylong event at the iHotel Wednesday.

GIS Day: What it’s about

The event will feature a keynote address in the morning, an afternoon plenary talk and 23 five-minute lightning talks in three sessions throughout the day.

“I’ve been doing GIS my entire career,” said Kingsley Allan, GIS manager at the Illinois State Water Survey. “In the old days, we kind of knew everything that was going on (in the GIS community), because there weren’t as many people doing it. Now there’s just been this explosion in the last few years. So it’s really a delight to hear how they’re applying it.”

Jessica Camille Aguirre of Smithsonian magazine writes, “At its most essential, GIS is a system for marrying data sets with geography.” The applications of this map data are nearly endless and can be harnessed in a variety of subject areas.

The multidisciplinary aspect of GIS will be shown in the variety of lightning talks given by individuals from around the region.

“There are lots of different faculty and staff members presenting from all over the University,” said Tari Tweddale, GIS and remote sensing specialist at the Illinois Natural History Survey (INHS). “(GIS Day) gives a good snapshot in one day to figure out what other people are doing on campus with GIS.”

Also part of the INHS is Janet Jarvis, remote sensing specialist. Jarvis is giving a lightning talk on the GIS and spatial aspects of her organization in collaboration with the Illinois Department of Transportation.

“I’m the only person that does what I do in my small group,” she said. “So this is a good opportunity for me to show them and do a presentation that they can come to.”

The event is free and open to the public, and all are invited to come — even those with little knowledge about GIS.

“It’s not just for faculty and staff; it’s for the whole entire community,” Tweddale said.

Registered student teams will participate in a competition called The Amazing Waste Race, where the teams locate as many waste receptacles on campus as they can using GPS and an ArcGIS mobile app.

All in all, GIS Day epitomizes the comprehensive variety of uses and unique applications for such a wide-ranging software.

“When I was a grad student, I had a lot of opportunities to learn about other projects (concerning GIS),” said Matt Yoder, transportation planner at Champaign County Regional Planning Commission and 2014 Master of Urban Planning alumnus. “But now that I’m in the professional world, I don’t have as many opportunities to do that, so this seemed like a great way to come and to see a lot of different projects in a very short period of time.”

Yoder is giving his lightning talk about the sidewalk network and the use of GIS to map and analyze them locally.

There have been two other GIS Day events at the University in the past, one in 2009 and one in 2010. Allan and his colleagues have helped bring it back this year because of the wide use of the Geographic Information Science, or GIScience field, as well as the GIS Software.

However, this event is not unique to the University. In fact, GIS Day is an occasion celebrated internationally on Wednesday, with hundreds of events occurring in every continent. A full map can be found at GISDay.com under the “Events” tab.

“Sometimes GIS is hard for people to understand … and so GIS Day kind of surrounds (those who work with the software) with a peer group,” Allan said. “So I like how it makes my career feel important. It gives (the peer group) a day to brag about themselves.”

The evolution of GIS

Tweddale has been working at INHS for 14 years, and Allan has been with the Water Survey since 1993. Back then, he said, it was tricky because there wasn’t as much data available to them. These days, both Allan and Tweddale said they have seen how the software has continually progressed.

“It has transitioned from being used by mainly specialized users on their desktop computers to being able to be used by almost anyone with a computer and a web browser,” Tweddale said. “And that’s kind of where the technology trend is taking over. So it’s exciting and challenging at the same time.”

As new changes arise, new job opportunities do as well. During the GIS Day event, there will be opportunities for networking. These are mainly aimed at students who are studying GIS. At the event, they will be able to get in touch with local GIS professionals in addition to companies who are hiring.

“Networking is the biggest reason I am pushing (for people to come to GIS Day),” Allan said. “It’s a good partnership between various agencies across campus.”

Reema can be reached at [email protected].