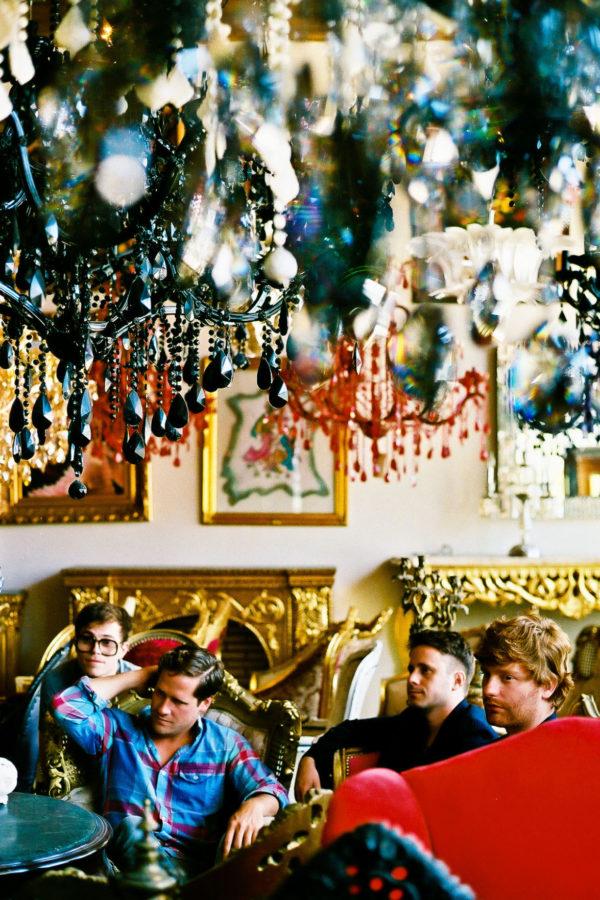 Here, in this enclosed space, the concept of illegally downloading music or streaming songs for free is obsolete. Here, the music consumes the intimate room and the pure simplicity of the art ignites fire within the audiences’ eyes. Here, the notes chase each other up and down the room’s walls and dance into the audience’s limbs, inspiring excitement and movement.

In this enclosed space, this art cannot be stolen. It is vibrant, it is electric — it is theirs.

Mansions on the Moon’s music brought magnetic vibes to The Canopy Club on Friday, and the three-year-old band’s members reflected on their progression as a band and how the transformation of the music industry has affected their music sales.

“I would make music if no one listened to it anyway,” said Ted Wendler, the band’s guitarist. “It is something that I just do … It’s intrinsic to me, and I’ve always done it. … I was doing it before anyone was listening.”

Mansions on the Moon’s hip-hop and R&B inspired music caught the attention of The Neptunes and Shay Hayley in 2011, leading the band to develop parts of its first album at The Neptunes’ studio. Now the band is on tour funded by its sponsorship with Lyynks, a music platform that streams independent music. As a developing and independent band, it endures the effects of illegally downloading music.

“I don’t know if it is right or wrong but it sucks for artists trying to make a living,” said Lane Shaw, drummer of Mansions on the Moon.

The music industry faces this dilemma as music sales continue to decrease this year.

According to data collected by Nielson in its 2014 Mid-Year Music Industry Report, album sales have decreased by 14.9 percent since last year. While the lack of album sales are hitting the music industry hard, some argue that the biggest detriment is felt by the artists.

“(Artists) make less money because record companies have this thing called 360 deals,” said Jeff Maccora, bassist of Mansions on the Moon. “Before they didn’t get any of your merchandise money, that would be just for the artists. Now they can take a huge percentage of that if they have it in the contract; they can also take a huge percentage of your live show. So now more than ever artists are going to get the bad end of the deal.”

The 360 deals began in response to the deterioration of the music industry, specifically because of the sharp decline in record sales. This deal allows record companies to fund the artists’ tours and marketing bills, but in return, the companies get percentages from the other outlets of artists’ income, such as live shows, merchandise sales and music sales.

“But live shows are still important. … If you can really perform and entertain and portray that song, that is always going to be really valuable,” Shaw said.

The debate over free music is not a new phenomenon. In the past, it silently developed, slowly interrupting the rhythm of the music industry over time. Today, users can illegally download music directly onto a phone or iPod and stream music for free on sites like Pandora, Spotify or 8tracks.

“Since the spread of technology, you really cannot contain music,” said Devante Barbee, junior in Education and avid Spotify user. “There’s no way to stop it. Technology is too good.”

Despite the popularity of streaming music, artists can still make money from sites like Spotify, which on average pays artists $0.006 to $0.0084 per play. According to Daniel Ek, CEO and founder of Spotify, in a Nov. 11 blog post, Taylor Swift could have made approximately $6 million a year if she would have kept her music available to stream on Spotify.

“So we’ll get a good amount of money from that (streaming sites) as well, so its almost like another revenue stream. … I guess it’s a necessary evil in a sense, and then you just hope people buy tickets to your shows,” Wendler said.

Financially speaking, the revenue from streaming cannot compare to the funds that iTunes generates depending on the record label; however, it is a way for artists to get exposure for their music.

“There are so many ways to get music now, and it’s almost like when you’re a small band it’s just assumed that it’s going to be free and definitely free for streaming. I think that it can be a great way to get your music out there; like we released everything for free at the beginning but now we have it only available for download,” Wendler said.

Due to the popularity of these streaming sites, artists have to be more innovative in order to make money in the digital age.

To combat low record sales, there is an increase in the number of partnerships with corporations that artists have to establish in order to continue doing what they love, Maccora said.

“A brand partnership is really powerful. It’s a way to work with brands to push your music by pushing a brand at the same time. It can be mutually beneficial,” Wendler said.

However, there could be consequences for linking up with a potent name brand.

In August, Usher announced that his new single could be found in some boxes of Cheerios sold primarily at Walmart. He even incorporated the mascot of Cheerios in his marketing strategies when promoting his new single.

The evolution of the music industry potentially leaves artists in a void. Sometimes they are forced to link up with powerful corporations who could conceivably alter their art, but their options are so limited for income that they can’t always walk away from these big deals. Maccora reflected on a story he heard from a manager about an artist in the 1970s who turned down a $500,000 deal from Coca-Cola.

“I don’t know if anybody would do that now,” Maccora said. “And then you could have someone like Coca-Cola calling the shots, but it’s what (artists) have to do now to survive because we love music. It sucks for you (the audience).”

Walking away from those deals could mean pouring years of energy into a body of work and then receiving little to no monetary value for that collection. Mansions on the Moon’s members recall working on their first single for almost three years and other singles for a year to two years.

“It’s crazy that someone can just download something for free where I had to take 10 trips on the bus back and forth to mixing sessions. I’m not going to sugarcoat it — it definitely sucks,” Maccora said. “But the silver lining in all of this is the fact that we got to make the music.”

Darrah can be reached at [email protected].