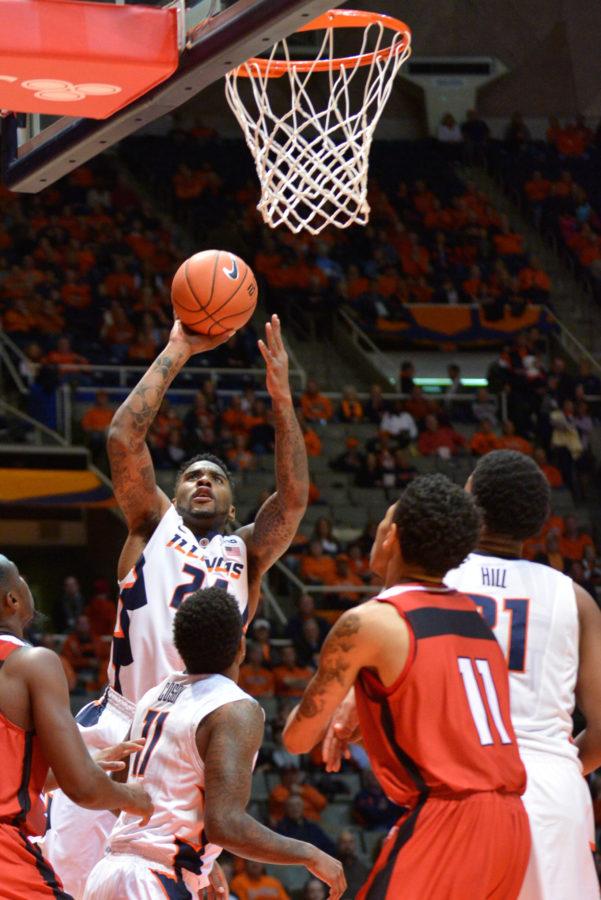 The Illini have averaged 100.3 points per game through their first three contests, scoring more than 100 in their last two games — the first time Illinois has done so since 1993.

“They really shot the ball well,” Austin Peay coach Dave Loos said after Illinois’ 107-66 win Friday at State Farm Center. “It’s been a long time since I’ve seen a team shoot the basketball as well as they did tonight.”

Illinois made 29 3-pointers in its last two wins, the most for an Illini team since 2005’s national runner-up squad.

“This is a fun team,” senior Nnanna Egwu said. “Sometimes I wish I could just sit back and watch us.”

Illini coach John Groce said Rice arrives early for every game and shoots for nearly an hour beforehand. Groce complemented the senior for his hard work.

“Ray’s getting what he deserves and what he’s earned,” Groce said.

Illinois has had a player reach double-digit scoring 15 times already this season.

But that’s not what impresses Groce the most about the offense.

“The thing that stands out the most to me was our unselfishness,” Groce said. “I just thought we really shared the ball.”

The Illini have 55 assists in their first three games, creating open shots with heavy ball movement.

Shooting 75 percent in the second half Friday, Illinois netted its second straight win of more than 40 points. The team also shot a season-high 56 percent from beyond the arc — increasing that percentage in every game so far this season.

“It was just one of those nights where the shots were falling,” Groce said.

And if Illini shots continue to fall this season, there may be more records to break on the horizon.