Downtown Champaign to light up for Parade of Lights 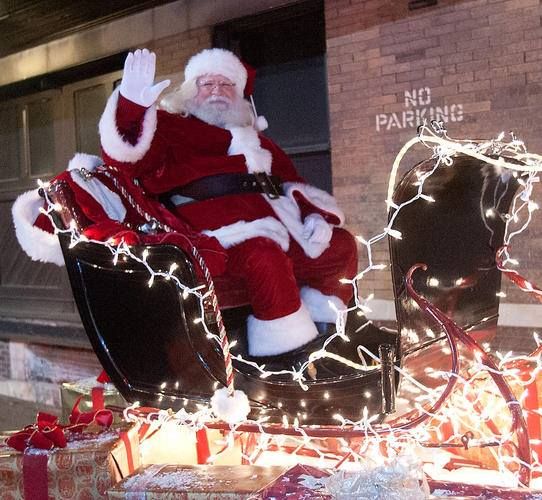 With December quickly approaching, it’s out with Thanksgiving and in with Christmas and the holiday season. The Champaign Center Partnership will host the 14th annual Parade of Lights on Saturday, with activities starting at 5 p.m. and the parade starting at 6 pm.

“When people think of downtown Champaign, they don’t think family friendly because of the bars, but it’s a clean, family event, which is appealing to so many people,” said Erin Lippitz, executive director of the Partnership.

Lippitz said that this is the fourth year the Champaign Center Partnership has hosted the parade, but for 14 years prior the Champaign Park District put it on. Last year was the first year pre-parade activities were added.

The pre-parade activities this year will start an hour before the parade. According to the Champaign Center Partnership website, the Parkland Wind Ensemble will be performing in the lobby of the Hyatt Place, students and teachers from the Conservatory of Central Illinois will be providing entertainment at Inman Place, and the Meadowbrook Church choir will be singing holiday songs at the Orpheum Children’s Museum.

In addition, the Emmanuel Memorial Episcopal Church will provide “Frozen” themed crafts. Free hot chocolate will be at various locations in the downtown Champaign area sponsored by Big Grove Tavern, the Vineyard Church, Boneyard Coffee and Tea, the News-Gazette and McDonald’s.

Also, the CUTC Dickensian Carolers will be singing in the streets. From 3 p.m. until 5 p.m., Santa Claus will have a meet and greet in the old Bank Champaign. Lippitz said that the Champaign Center Partnership is looking to build an actual house for Santa next year.

This event will be the Meadowbrook choir’s first performance at the Parade of Lights, according to worship and music coordinator Donneta Barth. Not only will they be performing at the pre-parade, but they will also have a float in the actual parade.

The choir is comprised of junior high and high school students as well as adults. Barth wrote in an email that during the pre-parade event at the Orpheum Children’s Museum, the choir will be singing “Joy to the World,” “Silent Night,” “It Came Upon a Midnight Clear,” and other carols. During the actual parade, the choir will be singing “Sleigh Ride” and other carols. They will also be passing out candy and invitations to their Carols, Candlelight and Communion Services event on Christmas Eve.

The choir had decided to join the Parade for the first time this year because they wanted to become more involved with the community celebrations, according to Barth.

“The opportunity to be a part of the Parade of Lights seemed like a perfect opportunity to celebrate Christmas with our whole Champaign/Urbana community,” Barth wrote. “We are grateful for this opportunity to join in the fun!”

In addition to the Meadowbrook choir and other floats, the Lawn Rangers will be having their second year of performance at the parade.

The Lawn Rangers, according to member of 20 years Tom Bruno, is a “precision marching drill team who have discussed talents with a limited set of resources.” The Rangers push lawnmowers and toss brooms back and forth to each other in their performances.

“They bring out big crowds. They make people come back,” Bruno said.

Although the Lawn Rangers act may seem unusual, they have performed at large venues throughout the country. Bruno said the Rangers marched on Jan. 28, 2008, in President Barack Obama’s first inaugural parade in Washington, D.C. They have also participated in the Fiesta Bowl in Phoenix, Ariz., the Holiday Bowl in San Diego, Calif., and have had performances at the NFL Hall of Fame and Indy 500.

Bruno said the Rangers enjoy participating in the Parade of Lights for many reasons.

“Many of us are from the Champaign area so it’s close to home. It’s short, about half a mile, and there are lots of bars we can stumble in after marching, which is very appealing to the Lawn Rangers,” he said. “It’s a loose group, we don’t really like regimented parades.”

Bruno added that rookie Lawn Rangers are trained minutes before the parades in order to march along the veterans.

At the end of the parade, Santa Claus will show up on his sleigh and light the tree at One Main Plaza where carolers will continue to sing. After the tree lighting, the Orpheum Children’s Museum will have their annual Snow Globe event.

Lippitz said around 2000 to 3000 people from the surrounding Champaign-Urbana area are estimated to show up to the Parade of Lights.

“It’s a fun parade. It brings people together and kicks off the holiday seasons,” Lippitz said. “It’s a really nice community activity and it’s about two hours, so it doesn’t take up the entire evening if families have plans after.”