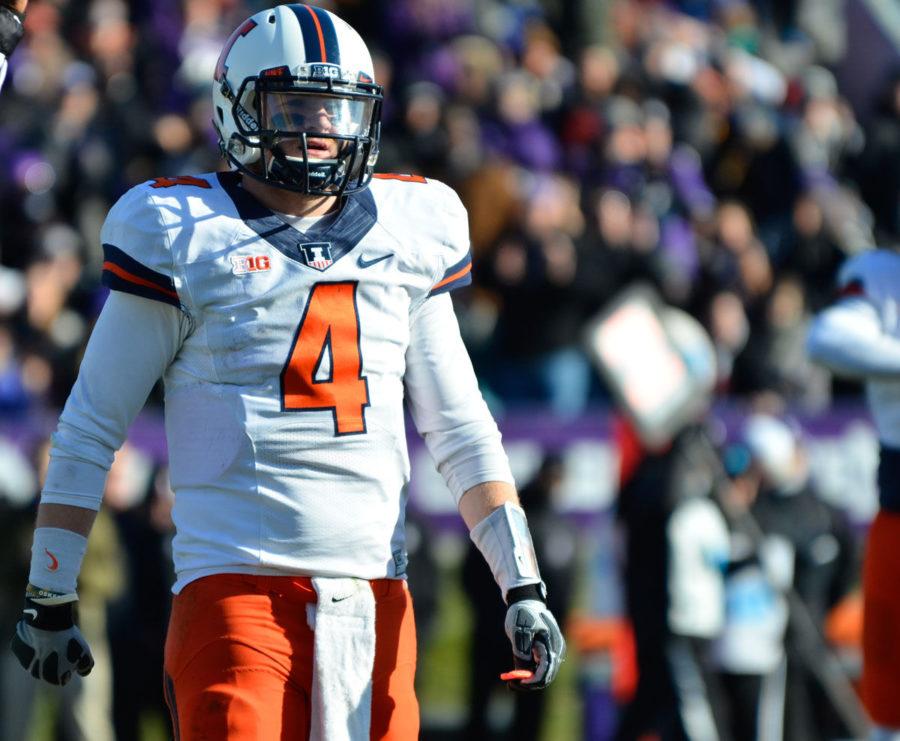 Limping toward the crowd of media awaiting him in the concourse at Ryan Field, Reilly O’Toole had a smile plastered across his face.

The senior quarterback had just led his team to a 47-33 win over its in-state rival, and more importantly, clinched a bowl appearance for the Illini for the first time in three years.

Sure, the gigantic grin was because of the big win, but there was undoubtedly another layer of that smile for himself.

By now, O’Toole’s story has been printed in the sports section of every publication covering the Illini this season: A four-year backup quarterback finally given a chance.

But it’s no longer correct to call O’Toole a “backup.” The senior fulfilled his relief duties when Illinois’ original starting quarterback Wes Lunt missed five weeks with a fractured leg.

Now healthy, Lunt didn’t return with the same spark he left with and was replaced by O’Toole in the second quarter against Penn State after completing just eight of 17 passes for 58 yards. During Saturday’s win over Northwestern, Lunt never played a down.

Instead, he watched O’Toole lead the Illini to seven different scoring drives, throwing three touchdown passes and 147 yards in both passing and rushing. O’Toole — a passing quarterback — had more rushing yards than any running back for either team. He ran for more yards than Illinois backs Josh Ferguson and Donovonn Young combined.

“It’s unbelievable how he can just come in, and he knows this offense so well,” senior tight end Matt LaCosse said. “He has a positive attitude and is a great kid on and off the field.”

On the field, O’Toole has led the Illini to three Big Ten wins — the most the program has had in a single season since 2010. Off the field, he continues to fill the supportive leadership role he grew accustomed to after spending nearly his entire college career as a backup.

After Saturday’s win, O’Toole unselfishly gave all the credit for his career-high rushing game to the offensive line’s blocking, saying it had to be them because it’s “pretty evident” he’s not fast.

The senior’s humility is the framework of a leader that offensive coordinator Bill Cubit never thought he’d see from the quarterback when he first came to the program in 2013.

“When I first got here that I didn’t think he wanted to compete. I thought he just wanted to be one of the guys,” Cubit said. “I give him so much credit because he’s matured in everything that he was doing. He’s pretty special. It’s kind of why you coach.”

Both LaCosse and Young, the quarterback’s closest friends on the team, said they admire the way O’Toole always finds a way to bounce back from tough situations. The Illini players pointed out emotional roadblocks in O’Toole expecting to start his senior year before finding out the program recruited Lunt, and they also pointed out physical challenges on the field.

“Kudos to him, because sometimes when I look at Reilly when he’s going through hard times and I’m like, ‘Damn dude, you really don’t get down,’” Young said. “He knows how to fight through stuff.”

O’Toole has been sacked 15 times this season and has played through it all, whether that means he’s limping toward the media after the game or not.

But on Saturday, O’Toole was limping with pride — struggling through battle wounds he never thought he’d have the opportunity to endure.

“I was excited to see him fight the way he fought,” Young said. “People don’t see that. People see stats. They don’t see the person behind it all. That’s one of the toughest dudes I know.”