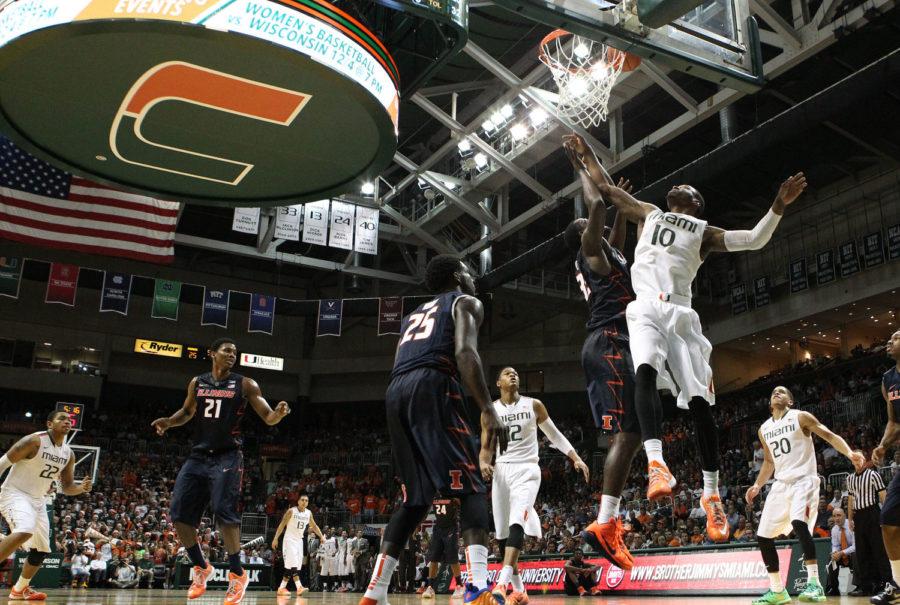 Miami’s Sheldon McClellan goes to the basket to score in the first half against Illinois in Coral Gables, Florida, on Tuesday. The Hurricanes won, 70-61. The Illini’s shooting percentage was their season-worst at 33.3 percent.

The No. 24 Illini suffered their first loss of the season, falling to No. 15 Miami 70-61 at the BankUnited Center in Coral Gables, Florida.

It was the team’s worst offense night of the season.

The Illini offense, which was fifth in the nation in scoring coming into the game, was unable to get shots to fall. Illinois missed 69 shots in the loss.

The newly-ranked Illini came into the game with a 48.2 field goal percentage.

Despite senior guard Rayvonte Rice’s offensive efforts, the depth Illinois has relied on early in the season had trouble backing him up on the scoresheet.

Rice had half the team’s points (11 of 22) with less than three minutes to go in the first half.

The senior ended the game with a team-leading 22 points and 12 rebounds. Sophomore forward Malcolm Hill (13 points) was the only other Illini player to reach double-digits.

Deandre Burnett led Miami 19 points. Manu Lecomte and Sheldon McClellan added 15 and 14 points, respectively, in the winning effort. The Hurricanes improved to 8-0, while the Illini dropped to 6-1.

Illinois fought its way back into the game after trailing 37-24 at the half.

Illinois even was within two midway through the second half.

Sophomore guard Kendrick Nunn took the Illini on another big run, scoring eight unanswered points, but Miami responded with a 12-2 run of its own to pull away yet again.

But the two guards shot a combined 2-for-20 in the loss.

If Tuesday night’s loss was any indication for the Illini, they need their offense clicking night-in and night-out heading into a tough schedule over the next two weeks. The stretch features matchups with No. 10 Villanova and Oregon at neutral sites.