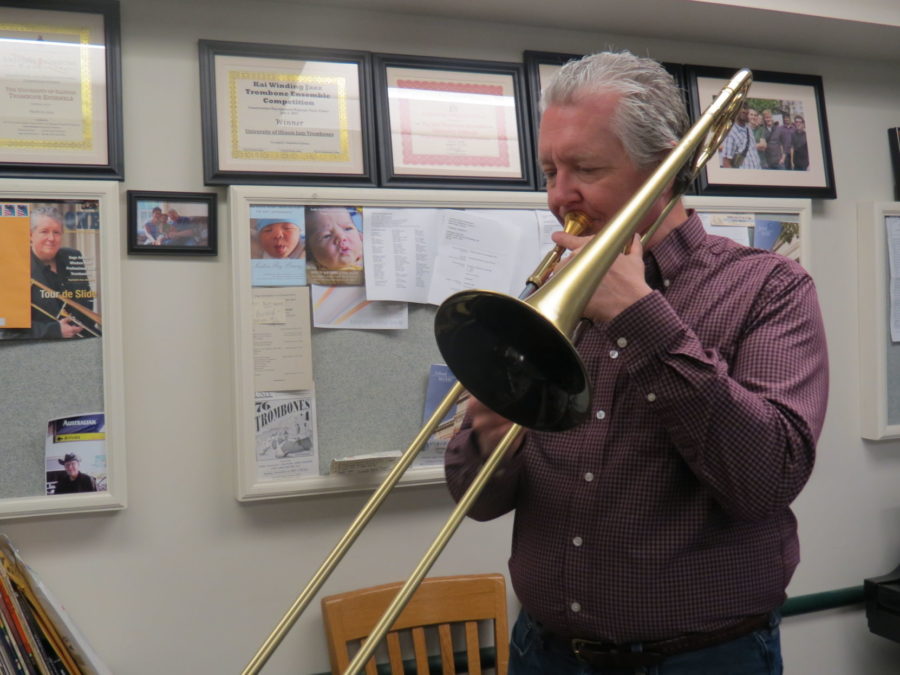 When he first saw it, he was ten years old. And, for whatever reason, he thought it might be interesting.

Now 54 years later, Jim Pugh, professor of jazz studies at the University, sits in his office behind the door’s “Bone Island” sign, a shorthand nod to his life’s profession. He tries to remember why he decided to pick up the trombone.

“It was the only instrument you could really see moving,” Pugh said.

Little did that 10-year-old know that this hasty decision would lead him to attend the prestigious Eastman School of Music, play with esteemed musicians Woody Herman and Chick Corea, tour with Steely Dan, Michael Jackson, Madonna, Pink Floyd and Frank Sinatra and play on over 4,000 recordings and compose works of his own.

“I don’t think anyone decides what they’re going to be,” Pugh said. “But I think you just do what you do. Sometimes, in the music career, it’s like blowing in the wind. You don’t know what kinds of things you’re going to get called for or what kind of direction you might be in. Most of life is like that. It’s important to have some sort of vision.”

For Pugh, music is, and always has been, at his core. Even if he didn’t know he would be performing sold out concerts in Carnegie Hall or the solos in the trombone section for the score of the 1992 movie, “A League of Their Own,” music was always the guiding force down that path.

What he does know, however, is that his trek down that path started when he received a 45 record player as a gift at the age of two. It continued from the guidance of his mother, a violinist, who encouraged him to learn the piano at the age of five and start playing the trombone instrument at ten.

“I remember at one point making up a tape of me practicing, and I would play that tape so my parents would think I was practicing,” Pugh said. “I probably wasn’t practicing like I should’ve been then, but I was always around (music). I was always involved in it. It was always at the core, whether it was (just) recording.”

Pugh believes every opportunity he has will continue to lead him to a new performer to play with, a new song to record on and a new experience to live through.

His most recent summer activity, touring with the jazz-rock artist, Steely Dan, speaks of this belief. Even though he met Steely Dan through a mutual friend, he could never have foreseen the outcome of connecting with the acclaimed group.

These outcomes are always on Pugh’s mind when accepting performances or studio sessions.

“You can never see this: going tobe friends with him way back then that this would blossom,” Pugh said. “You just sort of follow this path. With the Chick Corea gig, I called his office because I read in an interview that he was putting together a band with horns.”

Because of the plethora of extraordinary experiences he has lived through, Pugh has no favorite tours or musicians. Only favorite memories.

“I remember Woody Herman closing the door of his truck on my head one time,” Pugh said. “Now, recently, it comes down to memories of really small dressing rooms and the whole male part of Steely Dan being in this small, tiny room. When you’re doing a lot of miles on the road, those are the things that stick out to you. They’re out of the norm.”

Even Pugh, as one of the band members, has felt like just another audience member for the musicians he accompanies. He, too, stood in lines for autographs after the sessions.

“(I performed in a) movie (score) with Eddie Marconi, a film composer that most musicians have a huge amount of respect for. And at the end of the movie, there was a line of people from the orchestra in front of this podium getting his autograph,” he said. “He had changed a chord for the trombones, and he wrote out all of our notes on a little tiny scrap on manuscript paper, I took that scrap up — this is so corny — and had him autograph that.”.

A recent change in his career — one that led Pugh toward the academic side of music — wasn’t that easy.

“For me, I sort of went into this side of music kicking and screaming,” Pugh said. “But the further I got into it, I found I really loved doing it. I think that end has actually been something that’s opened up creative stuff in me that has gone by the wayside.”

Interacting with students inspires Pugh to continue music even at his current age of 64. It’s allowed him to meet rising performer and musician Reggie Chapman, a doctorate student of musical arts in FAA.

“Reggie is a fabulous musician, and being around students like Reggie, I get energy and inspiration from them, and hopefully it flows back, too,” he said. “I give them a lot of information and experience that I’ve had, and they can get me to where I’m pumped up again and excited about things musical. Seeing them discover something, all of a sudden clicks something.”

But, according to Chapman, Pugh’s teaching makes his wheel of inspiration continue to turn as well.

“He’s a hard worker. He just turned 64, and he’s still at it. He still practices every day; he still leaves to tour. He’s a lifelong musician, and he passes it on to other people,” Chapman said. “My tendency is to freak out, and he’s just like, ‘Don’t worry, just work at it.’ He has lots of faith in his students. I’m in the cornfields, but at least I get to work with someone like him. That’s why I’m here.”

His switch from performing to academia even inspired other fellow faculty member Charles “Chip” McNeil, whose office sits next to Pugh’s, labeled “Bone Island.”

“Jim is an amazing musician, both as a performer on trombone, a composer and arranger, in addition to being a wonderful colleague and person. There isn’t just one thing. It’s everything in aggregate,” said McNeil, the division chair of jazz studies.

Continuing his musical passions and being a touring musician isn’t that easy at his age.

“(Summer 2014) was a hard tour. We were doing a lot more bus miles. It was a luxury coach with bunks, lounges and sound systems, but I’m finding as I get older, I have a harder time sleeping on the bus,” Pugh said. “There’s stuff for me as I get a little bit older that I’m finding wasn’t as much of a problem 15 years ago.”

Despite the challenges, however, Jim Pugh has no vision of his life without music. He does not foresee this path ending anytime soon.

“I would still do it in a minute. A lot of my classmates at Eastman had wonderful orchestral careers, but they’re all retired. Even the ones that went into academia have retired. I’m not ready for that yet. People at my age have lost the fire in the belly. They still may be very talented, but the ‘I want this so badly’ kind of thing is gone. At 64, (mine is) not (gone) yet.”

For Pugh, Bone Island is home. Although he doesn’t know where he will be in 10 years or the way the path of music will take him, he will be playing.

Sarah can be reached at [email protected].