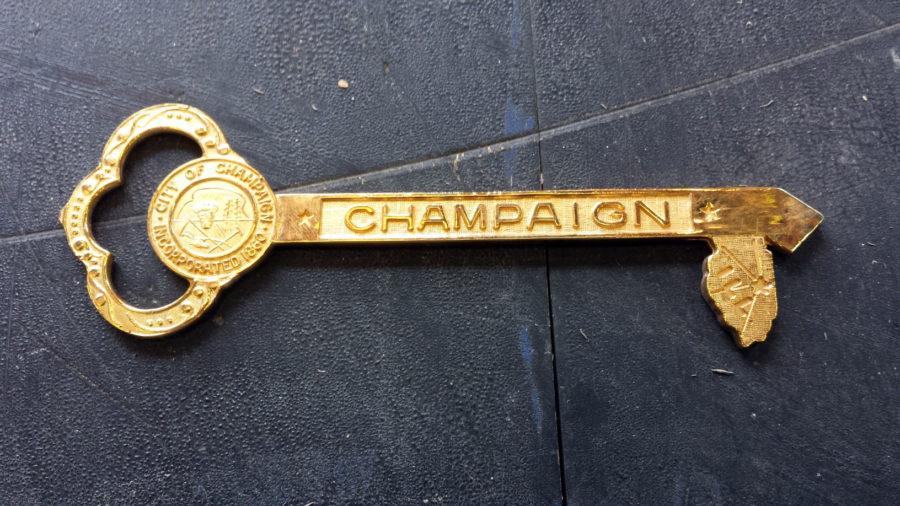 Abrar Al-Heeti, staff writer. The Preservation and Conservation Association (PACA) uncovers many gems in the local area, including a key to the city of Champaign in a house located near the intersection of Fifth Street and Springfield Avenue.

When Thomas Garza attended Edison Middle School, he would often look out the classroom window and wonder about an old house on the east side of the building. It was moments like these that influenced him to work toward preserving that house and other buildings like it.

Garza is now the executive director of the Preservation and Conservation Association (PACA), a local nonprofit organization that serves to educate people on the importance of preserving historic buildings in the community. It also promotes preservation and reuse of items through its architectural salvage warehouse, which receives and sells items from homes and buildings that are either being remodeled or torn down.

The PACA Architectural Salvage Warehouse houses items ranging from windows and doors to more unique pieces, including fixtures from old University buildings. The selection is diverse, as are the uses of the items purchased by the store’s customers.

“A lot of the stuff in here isn’t used for its original purpose,” Garza said. “Doors become tables or headboards. People take things and use them for other things. But at least they’re not in the landfill just rotting away. They’ll be of some use to somebody somewhere.”

Garza said though the architectural salvage warehouse is what PACA is most noted for in the community, it is just one component of the organization.

“It’s really kind of a fortunate side effect of our work,” Garza said. “When we can’t convince somebody to keep a building or can’t get them to reuse it and they’re going to tear it down or alter it in some significant way, then we at least try to save the pieces.”

The warehouse building was purchased in the early 1990s, and Garza said it has needed some remodeling ever since. But because the nonprofit didn’t have a lot of money to put aside for the project, the work was postponed until Garza and other volunteers decided they finally had to do something.

“We actually had a pretty good year this year (financially), so we were able to put on a new roof and redo the front of the building,” he said.

The work began in late October and was completed within a few weeks.

PACA is currently working to preserve an historic, Italianate villa-style house just west of the Champaign Public Library, the same house Garza would wonder about as a child. PACA is fixing the house with the help of capital improvement grants from the state.

“That building is historically relevant to me, so it has history. It should be preserved,” he said. “Buildings and places are part of the backdrop against which we perform our lives. It’s part of your community, part of your personal history, and it can connect you to the history of other people. There’s more to it than just a building.”

When Lincoln Hall was undergoing renovations, some of the old doors, bookshelves, desks and chairs were donated to the salvage warehouse. The University also gave the warehouse limestone that had once been in a gothic cathedral in France before the Spurlock Museum got a hold of it. After the museum decided it no

longer wanted the limestone, the staff gave it to PACA.

Brian Duffield, president of PACA, said they’ve had their fair share of strange items come in to the warehouse.

“We had a cadaver table from one of the old city hospitals,” Duffield said. “We also got a guitar body-shaped hot tub out of the old Burnham City Hospital. It was sold to a local business owner, who will use it in his garden.”

Darrel Foste, PACA board member, used to be salvage coordinator for the organization. He has driven to towns across Illinois to salvage homes and has discovered countless treasures.

He once found the key to the city of Champaign from when Emmerson Dexter was mayor in a house that was located by Fifth Street and Springfield Avenue. Volunteers weren’t certain why the owner of the house had the key, but did know he had done something for the city and was a veteran.

While PACA volunteers have a passion for learning about and preserving the past, Garza said it’s often harder for younger generations to appreciate the history around them.

“It seems like as people get older, they get more interested in the past, and it’s harder for young people (to get into it),” he said. “I think that a lot of younger people and students would be interested in this stuff if they knew about it in the right way — if they were introduced to what’s interesting about history rather than just memorizing dates.”

Abrar can be reached at [email protected].