The voice behind “Orange is the New Black” 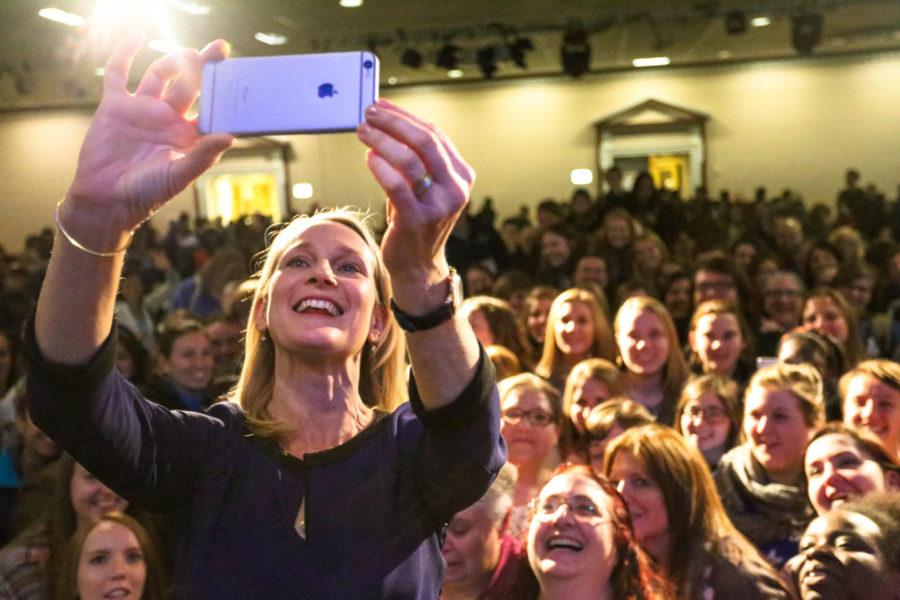 Piper Kerman takes a selfie with the audience of the lecture on her book, “Orange is the New Black: My Year in a Women’s Prison” at the Illini Union on Wednesday. Kerman’s boook was adapted into the hit Netflix original series.

Some may argue going to prison “destroyed their lives,” but for Piper Kerman, it made her famous.

Author of “Orange is the New Black: My Year in a Women’s Prison,” Kerman visited the University to speak about her book, which was selected as the University of Illinois’ One Book, One Campus featured book.

At 6:22 p.m., people were already lined up all the way from Illini rooms A, B and C to the quiet lounge of the Illini Union. By 6:45 p.m., the line had grown and wrapped back around down the east hall.

“We’ve been here since 5:45 p.m. I’m looking forward to hearing her real experience in comparison to the show,” said Melanie Israel, senior in ACES.

As people filed in, they continued to fill up almost every seat from wall to wall of Illini rooms A, B and C.

Ryan Kuramitsu, director of Enriching Programs for the Illini Union Board and senior in Social Work, said they were expecting around 800 attendees.

“‘Orange is the New Black: My Year in a Women’s Prison’ — Let’s go,” Kerman said as she began her lecture.

The book that started the hit series has become a number one New York Times Bestseller and is translated into 20 different languages for millions around the world to read.

Gretchen Webb, residence hall librarian for University housing, is on the committee that helps select the books for the One Book, One Campus program.

“People in the University housing book club were really excited and not just because it’s a show on Netflix,” Webb said. “Netflix drew a lot of people in and then to be able to read the book that addresses a lot of issues that faces our society involving incarcerated women.”

One Book, One Campus is a program at the University that turns the campus into a giant book club.

The program starts fresh every year by compiling a list of books selected by key representatives of the University for the Chancellor to choose from.

“We discuss a lot of books at the beginning of the year and make sure they address some kind of issue that affects the campus of society,” Webb said.

“Orange is the New Black” was chosen for One Book, One Campus’ feature book, because it exemplified the learning aspect the program was looking for.

Throughout the lecture, Kerman covered key aspects of her book and then followed by directing the audience’s attention to the issues within the criminal justice system.

Kerman started with three main points: race and class, gender and power and friendship and empathy.

When addressing race and class, Kerman described how she was privileged to come from a family who could afford a good lawyer, unlike the majority of people who go to prison.

As she explained gender and power, she described her reasoning behind the title of her book.

“Ultimately the title — Orange is the New Black — was intended to remind folks that the person wearing an orange jumpsuit is more likely then ever to be a woman,” Kerman said.

She then ended with what she believed was the most important aspect of surviving prison — friendship and empathy.

Kerman said she was very grateful for the friendships with the women she did time with.

“My lawyer said to me, as I was going off to prison, ‘Don’t make any friends,’” Kerman said. “I don’t know how you would survive incarceration without friendship — it is essential. It is the only essential thing that will help you fundamentally survive.”

As Kerman continued telling her story, she touched readers with the details and emotional aspects about her time in prison.

“My favorite part was probably when she was showing the women that work at the women’s prison with her, like Carmen, and how real people who have been in prison for such low-level offenses and the reality of it,” said Cashmere Cozart, sophomore in LAS.

While writing the book, Kerman hoped that those who wouldn’t normally read about prison would want to learn about prison life.

“I wanted the reader to be able to imagine themselves in my shoes or in one of the shoes of the other women.”

Jasmine can be reached at [email protected].