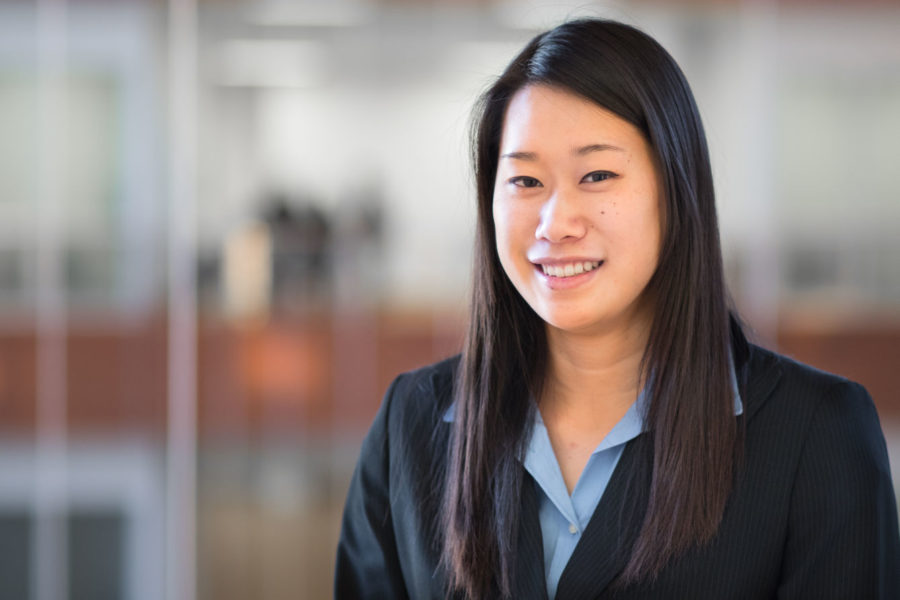 Portrait of Abigail Ling, President of the James Scholar Committee for Business

Every year, the audience at graduation goes silent as “Pomp and Circumstance March No. 1.” begins to play. Among the sea of blue gowns, the distinguished cords of James Scholars pop against the standard academic dress. It’s an honors program meant to recognize the top students within their class.

Named after the fourth president of the University of Illinois, the James Scholar program looks to advocate scholarship and research within campus. Its purpose is to challenge students, give them recognition and allow them to be a competitive candidate if they wish to pursue graduate school, said Kirsten Bartels, Honors of Liberal Arts and Sciences director.

Each college has a different James Scholar curriculum and even some departments within that college may have an honors track. Each college presents its own qualifications, meaning the credit hours and GPA requirements vary from school to school. Most James Scholar programs, however, challenge students to fulfill an honors or activity credit.

“The University adopted the program to really augment the education of their best and brightest,” Bartels said.

However, many students question whether the James Scholar title compensates for the pressure to maintain a certain GPA and number of credit hours, in addition to the activity requirement. As every scholar challenged in various aspects, time management becomes crucial, said James Oto, sophomore James Scholar in Engineering. He finds the most challenging part of the program to be the GPA.

“The high GPA isn’t an unreasonable expectation, but one bad class can make you fall below the cutoff,” agreed Emily Alessio, sophomore James Scholar in Engineering.

Most people on campus are aware of the privilege of registering early and receiving recognition on transcripts as James Scholars. James Scholars can arguably be seen as better candidates for graduate school or getting a job. However, Lenny Erickson, University alumnus in computer science and physics, claims it does not make a huge impact graduation based on his experience.

“I would say it wouldn’t have a significant impact,” he said. “It would have more of a secondary impact, because you get to pick the classes you want; it gives you more freedom while you are a student. … (But) it’s an in-school benefit only.”

Although he still thinks that it is worth being a part of the program, he believes students can still gain the same prestige in other ways.

“Being a James Scholar guarantees that you did well in your classes,” Erickson said. “But there’s a lot of people that gets those kinds of grades who aren’t in the program.”

Although many colleges on campus emphasize the various perks of being seen as a James Scholar, Bartels hopes for others to realize the intrinsic benefits students receive from the program.

“It isn’t just a box you check. Hopefully the day you first step foot on campus and begin taking classes, you start looking at yourself as a leader and as a future leader,” Bartels said.

LAS James Scholars are offered the opportunity to get involved with a student advisory committee, serve as interns that teach classes and go on trips and conferences. Bartels’ main concern is to make sure that students leave with a well-rounded education and that they have the tools they need in order to succeed.

“We are really trying to provide avenues for students to get involved with a variety of things that will enrich their education and their future,” said Bartels.

Abigail Ling, senior James Scholar in Business and president of the James Scholar executive committee, also believes that students have more to gain than just the standard early registration. She trusts that one of the greatest things the James Scholar program can do is develop students as learners and leaders.

“It gave me a huge opportunity to grow in leadership. It has given me a lot to talk about in interviews and a lot of people know about the James Scholar program, which makes it prestigious in a way,” Ling said.

With their motto being “leadership and action,” Ling and the rest of the committee hope to stretch students and give them the opportunity to develop their leadership skills, in addition to their willingness to serve.

With these various opportunities, some students find that it does add to their work load.

“We have to do honors projects that can be time consuming, so we adjust to accommodate more work than we’re used to from just our classes,” Alessio said.

Although some people find the James Scholar program insignificant, others still find it highly profitable.

“I don’t think it is unnecessary,” Alessio said. “The early registration is helpful in the first two years and the honors contract should enhance the college experience if a student enjoys what they’re doing it for.”

Robin can be reached at [email protected]