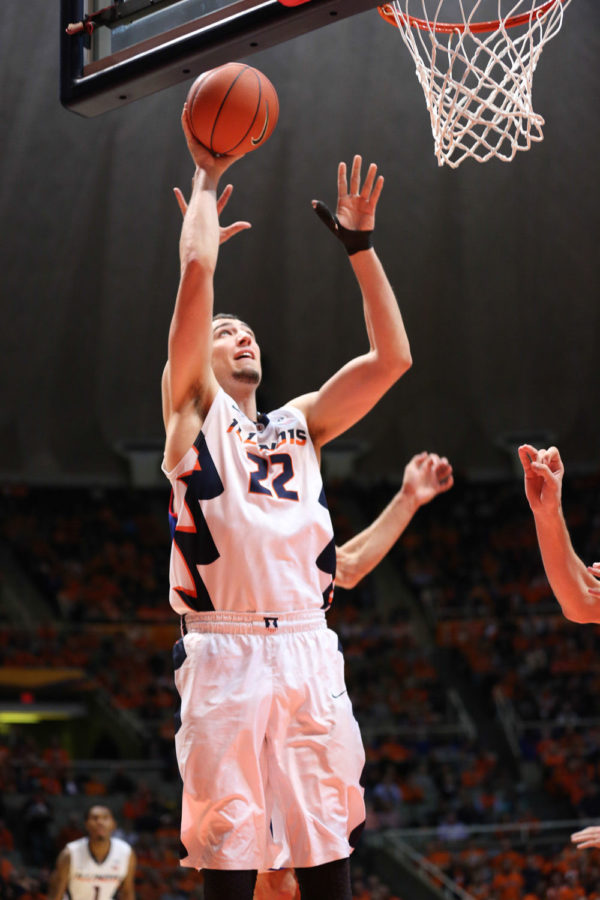 Leaning over and pulling the base of the microphone up to his mouth, Maverick Morgan looked down and avoided eye-contact while he answered questions.

The backup center was timid in his responses at the press conference following Illinois’ 70-55 win over American last Saturday. But if this season’s Illini basketball team performs the way head coach John Groce’s is expecting, then the bench players will quickly get used to talking with the press.

Groce has flaunted the depth of this year’s Illini team, which has featured a productive bench early on. Only two opponents have outscored Illinois (7-1) from the bench this season.

And the Illini will need all the help they can get heading into a big-time matchup Tuesday night against No. 7 Villanova (8-0) at Madison Square Garden in the Jimmy V Classic.

“To have a chance to play on national television in the Jimmy V Classic in Madison Square Garden — I do not want them to take that for granted. It is a privilege,” Groce said. “But once the ball’s tipped, it’s a game.”

Tuesday’s game pits Illinois against its highest-ranked opponent so far this season. The Illini lost their only other ranked matchup, 70-61 at No. 15 Miami last week.

Morgan had been struggling heading into Miami. In his last three games, the sophomore had more fouls than points (eight fouls, seven points) — even racking up four fouls in just four minutes against Baylor.

The center’s foul trouble and lack of production off the bench led to him sitting the entire 40 minutes against the Hurricanes.

Groce called for more production out of his backup forwards following the loss, comparing the performance he’s looking for out of his bench players to the way relief pitchers have to perform well in a short window of time in baseball.

“We need those guys to play better. Period,” Groce said. “You can’t go in, play two minutes and be a doughnut. You’ve got to do something positive — it certainly doesn’t have to be perfect — but you need to throw more strikes than balls.”

The center scored a career-high eight points in 11 minutes and contributed four rebounds during a game where the Illini didn’t allow the Eagles any offensive rebounds.

Morgan said his work in practice kept him in stride after sitting against Miami: “Not playing didn’t really affect me much.”

The sophomore said he still needs to work on limiting his fouls, having racked up three more Saturday. But Groce was happy to see Morgan’s production rise regardless.

“He needed to make positive plays for our team and I think he did that,” Groce said. “It’s a step in the right direction for him.”

Morgan helped the Illini outscore American 28-3 off the bench — the biggest margin Illinois has had in that category.

“We have a bench full of starters in my mind,” starting forward Malcolm Hill said. “The bench is really important.”

Illinois will need the bench to remain productive against Villanova, who spreads playing time in a similar manner as the Illini — both teams have eight players who have played more than 100 minutes this season and six averaging more than 20 minutes per game.

“They’re very, very well-balanced,” Groce said. “No one on their team takes more than nine-to-10 shots a night max.”

The Illini have also done well sharing the ball, having more assists than opponents in all but two games.

“We just play so unselfishly,” said starting center Nnanna Egwu, who is one of the seven Illini with double-digit assists already this year.

Illinois will look to capitalize on a slight height advantage against Villanova, with Illini forwards on average are more than an inch taller than the Wildcats’ forwards. Illinois also has 308 rebounds on the season to Villanova’s 283.

Although Groce recognized the Wildcats forwards are “a little undersized,” the coach said the Illini are mindful of their opponents’ presence on the boards because they play bigger.

But Groce is more concerned with what his team can control, and the Illinois forwards all-around have began to show the improvement he was looking for last week.

“Our four and fives were really active on the boards,” Groce said after Saturday’s win, less than 24-hours after asking for more out of his big men.

Now the coach is hoping his bench’s performance — much like Morgan’s on Saturday — turns consistent heading into a high-profile contest against a top-10 Villanova team.