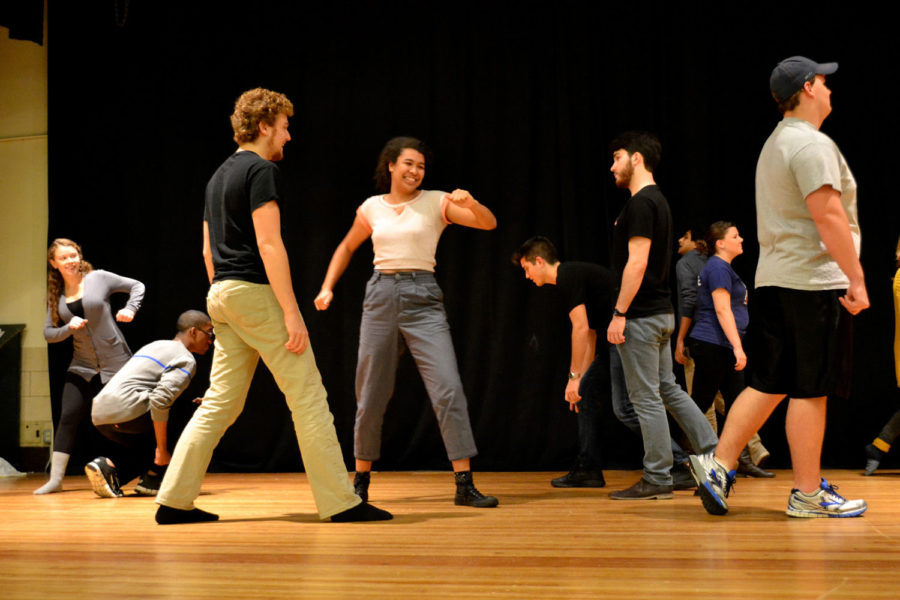 Members of the Penny Dreadful Players ensemble rehearse in preparation for their holiday production, “‘Tis the Season”, which will be debuting on Friday.

The Penny Dreadful Players (PDP) will present a new twist on holiday favorites in their newest play, “Tis the Season: A New Holiday Show,” on Friday and Saturday at 8 p.m. at the Channing Murray Foundation.

The PDP is the oldest student-run theater group on campus. For 22 years, the group has served as an outlet for students to present their original work and experiment with professionally written work.

The show is a compilation of student written work in the form of sketch comedy. Stephanie Svarz, president of the Penny Dreadful Players and senior in theater, wrote the show with Aaron Russell, treasurer of the group and junior in Engineering.

The show is a sketch comedy all about the holidays and is Svarz’s first time directing this type of production.

“We have a parody of the ‘12 days of Christmas,’?” Svarz said. “We also have one about ‘How the Grinch Stole Christmas,’ except it’s with college students and the dean is taking away all of their alcohol. We just put together this collection of short scenes and sketches along with some musical numbers.”

Russell has been collaborating with Svarz since the summer to put the holiday show together. The two first started meeting early in the semester to brainstorm ideas, and decided to include work from David Sedaris, an author and comedian, in the show. Svarz and Russell also put together songs and formatted the show like “Saturday Night Live.”

Russell said that working with Svarz is great because her priority is making sure that all cast members have time to get to know each other instead of diving right into the material.

“The first week of rehearsals, Stephanie doesn’t even pick up the script. She loves to do cast bonding. So we do trust falls — that’s always one of the first things she does,” Russell said.

The team bonding also allows for cast members to feel comfortable with each other right away.

“We become very close in a very short period of time and this helps build the trust that must exist between actors on stage,” Svarz said. “It’s this trust that allows the actors to take risks and make the bold choices that shape the work that audiences see on stage.”

Svarz has been a member of PDP since she transferred to the University from Ball State University. Her duty is to facilitate group meetings on Sundays and serve as the liaison between the Registered Student Organization office and the group. The group is open to all students, not just those enrolled in the theater program on campus. In fact, most members are not affiliated with the fine arts department at all. Svarz said that working among her peers is a rewarding process.

“The energy is amazing. We have people coming from all over the place,” she said. “No one has the same story or experience. I think because of that, the group is so rich.”

The diversity in the group gives members the opportunity to express themselves, regardless of what they are studying in school. Russell said that even though his major is in science, he feels that being a member will give him the communication skills he needs to be successful in his field. He says that being a member gives him a creative outlet that he didn’t think was possible.

“It’s a really great hobby I want to continue. It’s something I want to do the rest of my life, so it’s great that I don’t have to give it up just because I’m in school right now,” Russell said.

The group encourages new members to join the family. Mark Weidner, junior in Media, was hesitant about joining the group at first, but once his nerves subsided, he signed up for auditions this fall and was cast in the holiday show.

“For the holiday show, I am doing a monologue,” he said. “My material is adapted from David Sedaris called ‘Santa Land: The Diaries.’ It’s basically me playing Sedaris talking about his time working as an elf at Macy’s Santa Land in New York City. It’s interesting because I’ve never done anything like it before. It’s a whole new learning experience for me.”

Svarz said that being a member has had a major impact on her. In class, she primarily focuses on theater theory. However, the skills she has developed through working with PDP will follow her wherever she goes.

“I get to put everything I’ve learned into practice through PDP,” she said. “I’ve learned about relationship management, how to work with people. Its one thing to read a book about directing. It’s another thing to actually direct a play.”

Members believe that the Penny Dreadful Players are distinguishable because of their sense of community.

“Everyone cheers for each other. It’s really great,” says Weidner.

Amanda can be reached at [email protected].