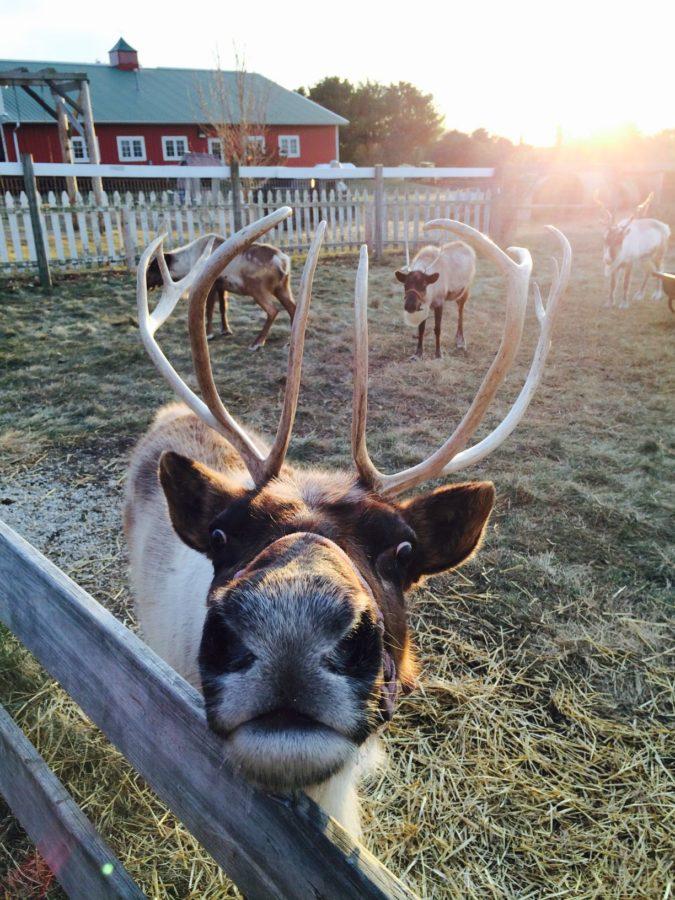 The herd pranced around Hardy’s Reindeer Ranch in Rantoul, looking for the attention of owner Mark Hardy as he handed treats to his twelve reindeer from the other side of the low, slatted wooden fence.

“If you listen closely, you can hear that their hooves actually do make a clicking noise,” Mark said as he watched the reindeer move around the fence, positioning themselves for treats.

These 12 reindeer are descendants of an original group of 15 purchased by Mark and his wife, Julie. The first two reindeer were purchased in Michigan in 1995 and the additional 13 were flown in from Alaska on Delta Airlines three years later.

“So reindeer do fly,” Julie joked.

The Hardy’s own and operate Hardy’s Reindeer Ranch at 1356 County Road in Rantoul, a seasonal ranch and Christmas tree farm that offers fall and winter activities and is open to the public from August to Dec. 28. For the rest of the year, the ranch is open for private group reservations in an old western-style banquet hall on the property.

Although its 10-acre corn maze is the main attraction in the fall, according to the Hardys, the reindeer have won the attention of tourists and natives alike during the winter season.

Visitors can take the Reindeer Experience Tour for $4 in which they get to meet, feed and even kiss the reindeer if they want.

“It’s not just that we have reindeer, yes that is unique, but it was our story of how we got them here and how we learned to do it,” Julie said. “And it kind of grew beyond that. We have tour buses that come in from all over the nation. I actually think the adults enjoy the reindeer more than the kids. The kids see the reindeer and they’re like okay no big deal, but the adults are like ‘tell me about this.’ They want to learn all about it. It’s very fascinating for adults.”

Katie Coyle, sophomore in Media, said she was surprised at the size and appearance of the reindeer when she visited the farm in the fall with her sorority, Alpha Epsilon Phi.

“When you think reindeer you think Rudolph,” she said. “You think very cartoon, aesthetic, thin, pretty, silhouettes of reindeer on Christmas cards. I didn’t expect them to be (so) big, but they’re actually adorable.”

During the week the couple spent in Alaska purchasing the reindeer, they lived on a reindeer farm learning how to raise the reindeer. However, both Mark and Julie said they realized that what works in Alaska doesn’t always work in Illinois. They are one of the few reindeer breeders in the lower 48 states and are involved in the Reindeer Owners and Breeders Association where they give and take advice on breeding and raising reindeer.

“The few of us that are doing this and doing it well, we share what’s working, what’s not working, and we’ve kind of put together a program from that,” Julie said.

Mark said growing up on a dairy farm has helped, too.

In addition to the crowds that come to see the reindeer, the ranch also attracts Christmas tree buyers. The Hardy’s estimate that they sell about 1,000 Christmas trees a year — both fresh-cut and pre-cut.

Since pine trees take six to eight years to grow and fir trees take eight to 14 years to grow, Mark brings in pre-cut Frasier Fir trees from Michigan to have available in case the fresh-cut trees run out.

“They’re what we call the Cadillac of the Christmas tree,” Julie said. “They last very long, and they’re fragrant, and they look like your traditional Christmas tree.”

Julie, an Urbana native, said she was working as a sales manager for Avon when she met Mark.

Meanwhile Mark, the son of a dairy farmer, was thinking about raising Christmas trees on the land his father had given him. By the time the two were married, the seedlings Mark had planted had grown into Christmas trees and were almost ready to be sold.

He said he originally wanted to sell the trees out of his house — a grey barn that he and his dad had built on the property — but Julie, who has a marketing background, envisioned more.

“She wanted a shop, a Christmas shop. She wanted reindeer. And she got all of that,” Mark said.

From that point on, the farm became Hardy’s Reindeer Ranch. Julie’s Christmas gift shop was built out of old barn timbers, complete with an authentic potbelly stove in the center that the Hardys light every morning in the winter.

The inside of the shop is adorned with strings of softly glowing Christmas lights and fresh pine and fir trees. From floor to ceiling, the shop is covered with holiday decorations.

“He was a single guy, thinking he wanted to raise Christmas trees, and then he met me and we figured out a way to market it,” Julie said.

The Hardy’s have owned and operated Hardy’s Reindeer ranch for 19 years of the 20 they have been married.

The ranch is open every day during the month of December from 10 a.m. to 7 p.m., except for Sundays when they open late at 1 p.m.