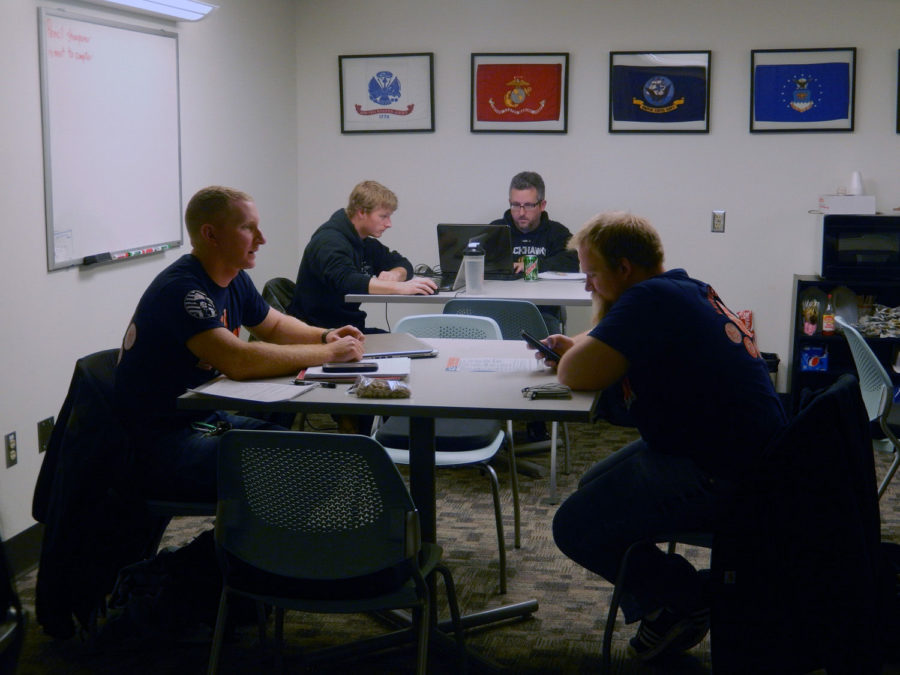 Veteran students study in the Veteran Student Lounge in the basement of Illini Union on Monday. Study groups allow student veterans to be with “like-minded people.”

The Military Times ranked the University as a top-tier school in the annual list of “Best for Vets” colleges. The University was ranked No. 37 among the top 100 four-year institutions.

The publication compared school responses of a 100-question survey covering “issues most crucial to student vets,” along with data compiled by the U.S. Education Department, staff writer George Altman wrote in the main article, “Best for Vets: Colleges 2015.”

This is the third honor the University has received in regards to its stewardship and leadership in providing services and programs for student veterans. In the past, the University has been included in the lists of “Military-Friendly Schools” (GI Jobs) and “Top Schools” (Military Advanced Education).

The University also boasts being the No. 1 “disability-friendly college” by New Mobility, a magazine for wheelchair users.

“When we receive these awards, it’s an indicator that we’re on the right track,” said Nicholas Osborne, assistant director of the Chez Family Foundation Center for Wounded Veterans in Higher Education. “But we should constantly look at what it means to be ‘veteran-friendly’ and to continue to deliver more effective services to our students.”

Previously, Osborne served as the University’s assistant dean and director of the Illinois Veteran Student Support Services. Prior to that, he pursued a doctorate in higher education administration at the University of California, Davis, and also worked as a readjustment therapist with Operation Iraqi Freedom and Operation Enduring Freedom veterans at the Department of Veterans Affairs.

The Center is scheduled to open in fall 2015 and aims to continue the University’s “deep, rich history” of providing programs and services to students with disabilities. More specifically, the Center will provide transition, employment, residential, therapeutic and rehabilitative services to student veterans with “grievous wounds and injuries” through individually tailored programs, he said.

“Given the current wars that we’ve been engaged in, we’re seeing such high proportions of students with traumatic brain injuries, post traumatic stress disorder and a combination of invisible and visible wounds,” he said. “Think about trying to be a student trying to manage with finals and with a brain injury.”

After serving on active duty in the U.S. Coast Guard for three years — spending one year deployed in the Middle East — he said finding a sense of purpose was difficult and that working with student veterans was a “natural fit.”

“Although it’s not mandatory that somebody is a veteran to work effectively with student veterans, there’s a familiarity with student culture,” he said. “I remember the first month home in the bay area of San Francisco. I woke up at 3 in the morning because I was still adjusted to Middle Eastern time. I went for a run and I went to Starbucks and I got my first good cup of coffee in over a year. And I remember drinking coffee and thinking, ‘I have this whole day to do what I want.’”

At that moment, Osborne felt a lot of gratitude, appreciation and a little bit of fear, he explained.

“You develop such strong bonds in the military, and leaving the military and being on your own, there’s that feeling of separation. You think, ‘Where are my allies? Where are my folks?’ That’s something that a lot my students will talk about,” he said.

In addition to his duties at the Center, Osborne teaches an eight-week course specifically offered to student veterans. The class, Veterans Leadership Transition (Applied Health Sciences 199), provides students the opportunity to connect with other veterans, to write about their experiences and to share about assigned readings.

Randy Genau, senior in LAS, said this class has been one of the biggest sources of help in his transition to college life. He served in the Army National Guard for six years and was deployed in Afghanistan from 2008 to 2009.

Among the helpful discussions, Genau said he particularly connected to one story a student shared in class about a man going on a journey and finding a monster in the forest. In the end, instead of hiding, the man becomes friends with the monster and uses it to guide his forest, he explained.

“I can relate that to my military experience; sometimes I think about it as the beast,” he said. “(But) instead of not talking about it at all or getting angry when people don’t understand, I’m trying to use it through a positive way. I’m getting comfortable with what happened and I’m realizing that I can use it as strength, like using the monster to guide my forest and not being haunted by it.”

Outside of the classroom, student veterans can also find community at the Student Veterans Lounge located in the basement of the Illini Union or join Illini Veterans, a Registered Student Organization that serves as the “student veteran voice” on campus, said Joel Exner, president of Illini Veterans and senior in Engineering.

Exner came to the University when he was 24 after serving in the Navy for six years in the USS Nimitz. He joined the Illini Veterans as a freshman after a former member invited him, he said.

“Illini Veterans is a social group and a way for veterans to get together and be with like-minded people on campus. It’s a quick and easy way to, at the very least, find undergraduates your own age,” he said. “It was such a great help for me when I first got here.”

Looking back on his experience at the University, Exner said the honor is fitting to his perspective as a student veteran.

“It’s great and well-timed, with the improvements that’s been made with veteran student support services and the University stepping up to help veterans in the past years,” he said.

Stephanie can be reached at [email protected].