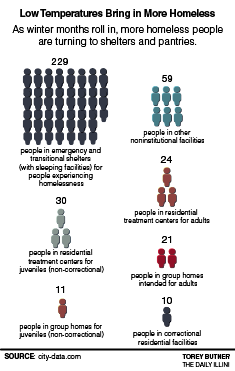 Simply walking down Green Street gives a glimpse into the level of homelessness in Champaign-Urbana, and as winter months approach and rumors of more polar vortices swirl around the country, safe havens for homeless people become a necessity.

One of the many shelters in the area is C-U at Home. C-U at home is a shelter that has a “family house” and a “recovery house,” which supports up to four people for approximately a year, both of which are full right now, said Paul Gallagher, managing director.

“Not only are we a safe haven in extreme weather, but it’s also a place that people are really enjoying coming to and interacting with other folks,” he said. “That’s been a comment in the last couple of weeks as we see the number of people basically double. People are enjoying themselves; they’re finding that it’s a really welcoming, fun, enjoyable kind of place to be.”

C-U at Home has a drop-in center where people come together to support one another “on their journey of healing and transformation,” Gallagher said. The staff and volunteers make visits on the streets to introduce themselves to homeless people and let them know someone is there for them and also to offer rides to nearby medical detox facilities. Champaign-Urbana doesn’t have one, according to Gallagher.

Today, the shelter serves more than 50 people in the drop-in center each day, especially as the weather turns colder. What started as a twice-a-week program has quickly grown to five days a week.

“We wanted to work as quickly as possible to add another day,” Gallagher said, attributing the fast growth to the weather, friendships and resources available such as telephones.

Center for Women in Transition

A shelter geared specifically for women is the Center for Women in Transition. Mary Wallace, the center’s director of development, said the organization has two main residential programs for domestic violence and homelessness. The homeless transition program allows up to 19 women (12 women with children and seven single women) to stay for one year while working to get back on their feet.

The domestic violence program has 10 rooms, five of which are classified as emergency rooms. The emergency rooms allow women to stay for up to 30 days while the other five house women for up to a year. Depending on the need, the rooms may be used for families or singles, Wallace said.

The program was founded in 1985 as the Women’s Emergency Shelter of Champaign County after community members recognized the need for such a shelter. Many shelters are open rooms with numerous bunks and house men that aren’t always appropriate to women and children.

“People visualize a homeless shelter, and they think of a barrack style dorm room with lots of bunk beds. That’s not what our single rooms are like,” Wallace said. “They are for three or four women, so it’s a smaller situation and there’s more privacy.”

The Center has private rooms for families and shared rooms for singles. They joined forces in 2010 with a domestic violence group called A Woman’s Place and are collectively known as Courage Connection.

The Center also has outreach programs that help people make the transition into stable living. The Center offers six affordable permanent housing units, all of which are currently occupied.

“We’ve come a long way from just providing immediate emergency shelter to providing a more long term program that helps people find that stability and maintain it in their lives,” Wallace said.

The Center sees an increase in colder months because that’s when people are trying to figure out their next steps, Wallace said. People typically don’t move to other cities or try for fresh starts until it’s warmer.

Mierkowski said they interview potential participants and those accepted receive a variety of services to help them become self-sufficient.

“It helps them get on their feet,” she said. “It’s pretty intensive as far as what kind of needs they have, so if they have a lot of needs then there’s a lot of working with them.”

The organization has five units and the staff tries to meet with each family at least once a week. Remodeling is expected to finish soon and the program will reopen after the holidays. Mierkowski said the program may shift its focus to more permanent housing but that is still in consideration.

Other services available are food pantries, such as the Wesley Evening Food Pantry. The pantry is open every third Thursday of the month from 3:30 to 7:30 p.m., said Brittany Coleman, volunteer coordinator.

Everyone receives a number from a lottery system so they don’t feel like they need to be first in line, she said.

“People were leaving work or school early just to be ahead of other people, so we didn’t want them to feel the pressure of having to be the first in line,” Coleman said.

Those going to the pantry must verify they have an income of 200 percent of the federal poverty level and can shop how they would at a grocery store. The pantry opened in 2006 and serves about 1,500 people each month.

“We open toward the end of the month just because that’s when paychecks and food stamps tend to run low,” Coleman said. “And we know that about fifteen percent of Champaign County experiences food insecurity at one time or another.”