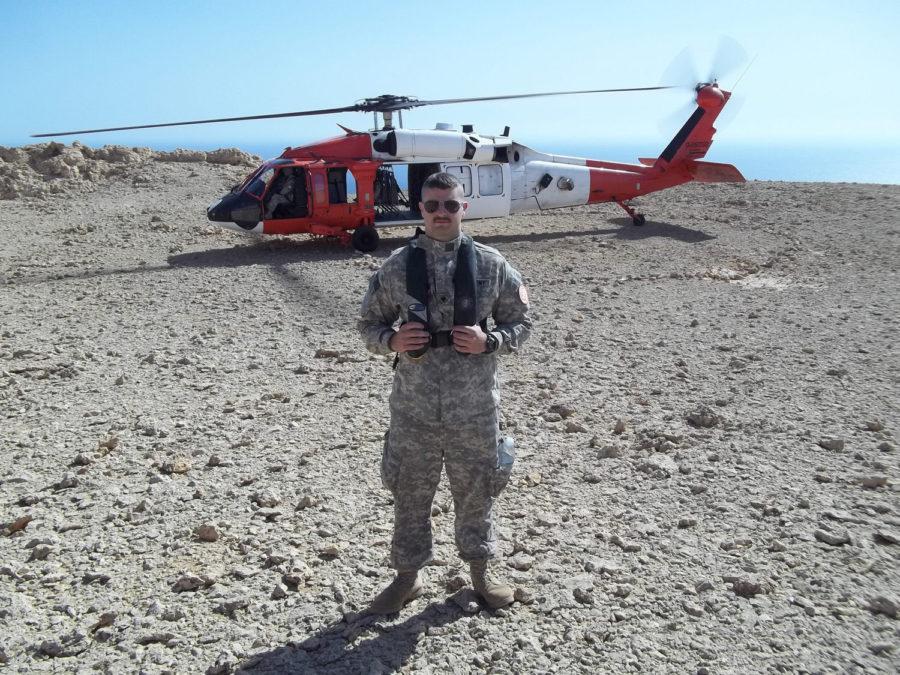 Alex Braem, senior in LAS and member of the National Guard, stands on a resupply mission on Turan Island in the Red Sea in March 2012.

Patricia Starks couldn’t sleep without hearing the sounds of fighter jets flying overhead when she returned to the University from Iraq.

Starks is just one of about 300 veterans on campus. The transition from military life to civilian and student life varies for veterans, but Illini Veterans, a Registered Student Organization on campus where Starks is vice president, aims to help with this transition.

“A lot of these veterans have been in war situations where it’s a struggle and a new transition; they grin and bear it,” said Starks, senior in LAS. “In a way, that’s good, but I think a lot of them have to learn how to ask for help.”

This fall, the University was included in Military Times’ Best for Vets four-year college list, ranked at 37. While the initial transition back to school was a challenge for the three veterans in this article, their time in the military also shaped their academic and future career goals.

Starks joined the Air Force in 2007 after high school. She had a passion for music, but she couldn’t decide what she wanted to do. Her parents weren’t going to let her just sit around, so her dad, an Army veteran, encouraged her to join the Air Force.

“It is the greatest thing that’s ever happened in my life,” she said. “The military’s not for everyone, but if you decide to do it (and) it’s for you; it’s probably the best decision anyone has ever made.”

Starks isn’t the only veteran who chose the military for clarity. Alex Braem, senior in LAS, joined the National Guard as a “way to get out” of his hometown. Andrew Morris, senior in LAS, was working to pay his way through school, but he realized he was working more than going to school.

“Finally, I was like this is no good,” Morris said. “I could take out loans or I could go serve five years and get it all paid for.”

Braem and Morris came to the University because of the Illinois Veteran Grant, which pays for 120 credit hours at an in-state, state-funded college.

In 2009, when a soldier dropped out of deployment to Iraq and her superiors were wondering who to send, Starks volunteered.

“Whenever someone needs a person to step up to the plate, I just do it without even blinking an eye,” she said.

Starks said she didn’t have time to process her emotions because she had a mere six days to pack and then go to Tampa, Fla., for two and a half months to train.

“You’re not thinking about, ‘Oh, I want to be sure to go out to eat at this place and get to go do this last thing for fun.’ You’re like, ‘Let me make sure my finances are in order, my family has everything taken care of, make sure my paperwork, as in a will, in case anything happens.’”

Back at the University, she said she had difficulty getting out of her overseas routine and found she didn’t interact with many people for the first couple of months, not because of depression or sadness, but because she just kept to herself.

“When you come back and you’re in a new environment with people from all sorts of places everywhere in the world, you kind of have a hard time figuring out where I fit in,” Starks said.

When an opportunity arose for a paid job with the Air Force in Peoria in 2011, Starks decided to take it because she had been struggling academically and financially. In Peoria, Starks worked in IT as a project manager, implementing a “Microsoft-based collaborative tool that allows everyone to work together via the computer.”

While Starks said she learned a lot at that job, she set a goal for herself that she would graduate from the University with her bachelor’s degree, and she “wasn’t going to let anything stand in (her) way.”

Starks felt “a million times brighter and stronger” during her second return to campus, as the Illini Veterans welcomed her with open arms.

Braem left the University around the same time as Starks. He started at the University in 2011 and deployed to Egypt on orders in 2012. Braem was a medic in Egypt, working in everything from general care, the emergency room, pharmaceuticals, patient transport, lab tech and as a combat water survival trainer.

Unlike Starks, Braem had a break over summer to unwind from deployment before going back to the University in the fall of 2013.

Braem said his friends were the biggest help in adjusting back to civilian life. That summer, he worked two music festivals, went to another music festival and took a road trip out west.

“It wasn’t like I was coming fresh off the plane and starting classes the next day,” he said. “I don’t know how that would’ve been. I think that I probably would have dropped out.”

Students deployed, while at the University, have to submit a withdrawal from the University with documentation of their orders, according to the Veterans Student Support Services.

Both Starks and Braem found professors to be understanding, and Braem even found some to be curious.

“What would you do as a professor and somebody in your class just got back from a country that’s going through a blatant revolution and you’re right there looking at it?” asked Braem. “So of course they were curious. At the same time, they understood the line.”

In the classroom, Starks had to adjust her mindset as a student. Instead of focusing on grades and homework, Starks said she needs to “see the bigger picture” in her assignments.

“Being a student, it’s not just an 8 to 5 job,” Starks said. “You have the whole day. You go to class. You come back to do homework during the evening. It was a transition where I had to learn to navigate my time accordingly.”

Morris had a similar, yet different, experience than Starks and Braem. At 24 years old, Morris enlisted in the Marines. He trained as a linguist at the Defense Language Institute to learn Pashto, a language spoken by the Taliban, before being deployed to Afghanistan.

As a linguist, Morris worked with local Afghan interpreters to “listen and translate the head security clearances.” Additionally, he went out in the villages to talk to locals about “what the problems were, how the Marines can rectify these problems and make them better, what we can do to make friends and be happy.”

After he returned to the United States, he married his wife, Carolyn, a fellow Marine, and later enrolled at the University in the summer term of 2013. While he recommends fellow veterans start in the summer instead of the regular semesters, like Braem and Starks did, he also reflected on the disadvantages.

“For me, coming during the summer semester did help out a lot because I made the academic transition without being inundated with a million students,” Morris said.

The downside, he said, was that he didn’t know about all the resources available to him in the summer. He had a “severe, traumatic brain injury” that now affects his processing speed. Until orientation during the fall semester, Morris didn’t know about accommodations through the Disability Resources & Educational Services.

Also unlike Starks and Braem, Morris is a husband and a father. When he gets home after classes, he spends quality time with his wife and three children. Morris makes sure to do his homework after his kids are asleep and he spends time with his wife because he “wouldn’t be able to do this without her 100 percent behind [him].” He even has another baby on the way due in January.

“Thank god it’s in the middle of the semesters. That’s all I can say,” Morris said with a laugh.

“For a lot of students here, they don’t know how to handle it,” he said. “You see a lot of people where they’re deer in the headlights in the conversation.”

Braem is open to talking about his military experience, and he said he encounters a lot of misconceptions. He said one of the biggest is that people relate his experience to movies. While he says sometimes it’s correct, it’s often not, such as when people ask him if he’s injecting morphine in soldiers’ shoulders when they find out he’s a medic.

“It’s not like that at all. It’s not very different from your local ER over here,” he said.

The Veterans Lounge in the basement of the Illini Union is where student veterans can find people who understand what they’ve gone through.

“People understand your language,” Braem said. “They understand where you’re coming from.”

Their military experiences shaped the majors and career paths for Starks, Braem and Morris.

Starks chose psychology because she wants to help veterans. She’s currently working as a research assistant to a Ph.D. psychology student, researching veteran mental health. Choosing to double major with economics is meant to add job stability in her future, along with her IT background, in hopes of one day running her own center to help veterans with mental, work and any other issues.

Braem chose communications because of the flexibility to be able to be deployed. Once he ends his undergraduate career, he has a lot of dreams to choose from: graduate school, creating a company that allows people to collaborate like in a University environment, or something in the medical realm.

Morris is a political science major and wants to go to law school at the University, and that was inspired by his time in Afghanistan. Morris learned from his military experiences that only a small portion of thousands of United States visas promised to the Afghan national interpreters have been fulfilled.

“We had these people who were promised U.S. visas to bring their families to the U.S. and are now stuck in Afghanistan with the label of helping the U.S. around their neck. And their families have been harmed. They are in danger,” Morris said.