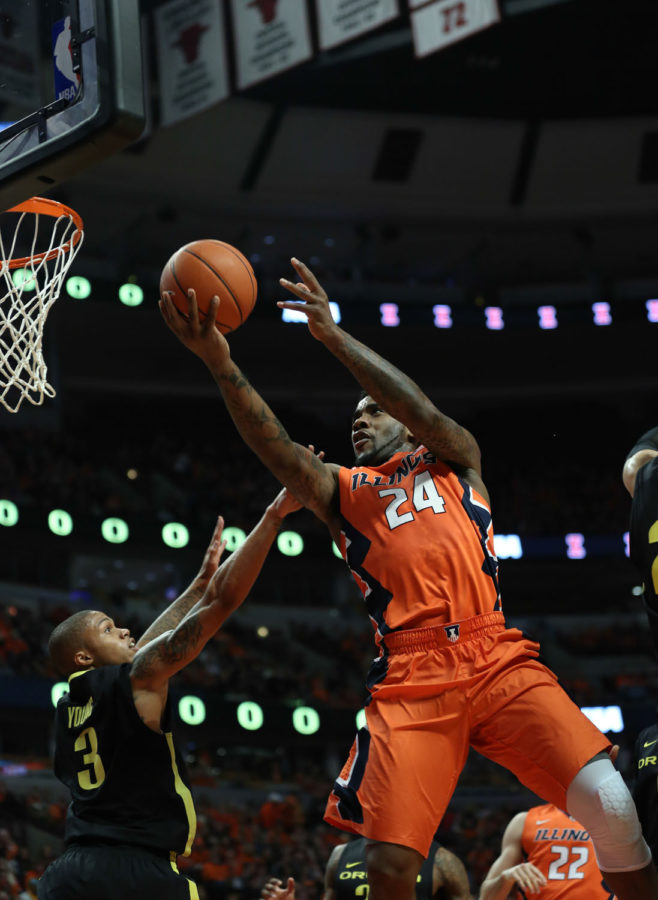 Illinois’ Rayvonte Rice (24) attempts a layup during the game against Oregon at United Center in Chicago, Illinois on Dec.13, 2014. The Illini lost 70-77.

After chasing the lead throughout the game in their last two losses, the Illini stayed ahead of Oregon for most of the game. But the Ducks grabbed the lead late in the second half and defeated Illinois 77-70 at the United Center in Chicago.

Illinois’ defense struggled, allowing Oregon to shoot 46.2 percent from the field and failed to stop the Ducks on a crucial possession in the closing seconds of the game with the Illini down 73-70.

Oregon led Illinois just three times in the game, chasing the Illini throughout. The Ducks trailed the Illini twice in the first half by double-digits and cut into Illinois’ lead with a 13-4 run to end the half.

“We just talked about getting it under 10 and regrouping at halftime,” Oregon coach Dana Altman said. “I’m really proud of the way we responded.”

Illinois head coach John Groce said Oregon’s run to end the half was the key moment in the game.

Rayvonte Rice led the Illini with 29 points, but the senior guard had little help offensively, with only one other Illini scoring more than 10 points (center Nnanna Egwu).

Rice shot 71.4 percent from beyond the arc. The rest of the Illini shot just 14.3 percent.

The teams traded shots back-and-forth throughout the second half. The game was tied on six separate occasions and the difference only stretched as high as five points until Oregon pulled away with 1:31 left in the game.

Fouls by Rice and junior guard Ahmad Starks led to five points on Oregon free throws, as the Ducks pulled out of reach.

“We have to be better at guarding the ball and not fouling shooters,” Groce said. “We’ve got to be smarter than that.”

Oregon had 12 points from the line on 18 Illinois fouls.

“We understand it’s a long season, but we have to find a way to correct ourselves,” Egwu said.

According to Groce, the biggest concern for the Illini this season has been the defense. But the Illini coach refused to blame the loss completely on Illinois’ performance.

“That was the best (Oregon has) played,” Groce said. “They were efficient.”

The Ducks had 20 assists on 30 field goals, crawling back into the game and outscoring the Illini 42-31 in the second half. Groce said Oregon’s offense “absolutely annihilated” Illinois.

“For the bulk of the game I thought we did really good things,” Groce said.

But the problem is Illinois gradually ran out of gas and lost momentum late — a problem Egwu and the rest of the Illini realizes: “We have to be all-in.”