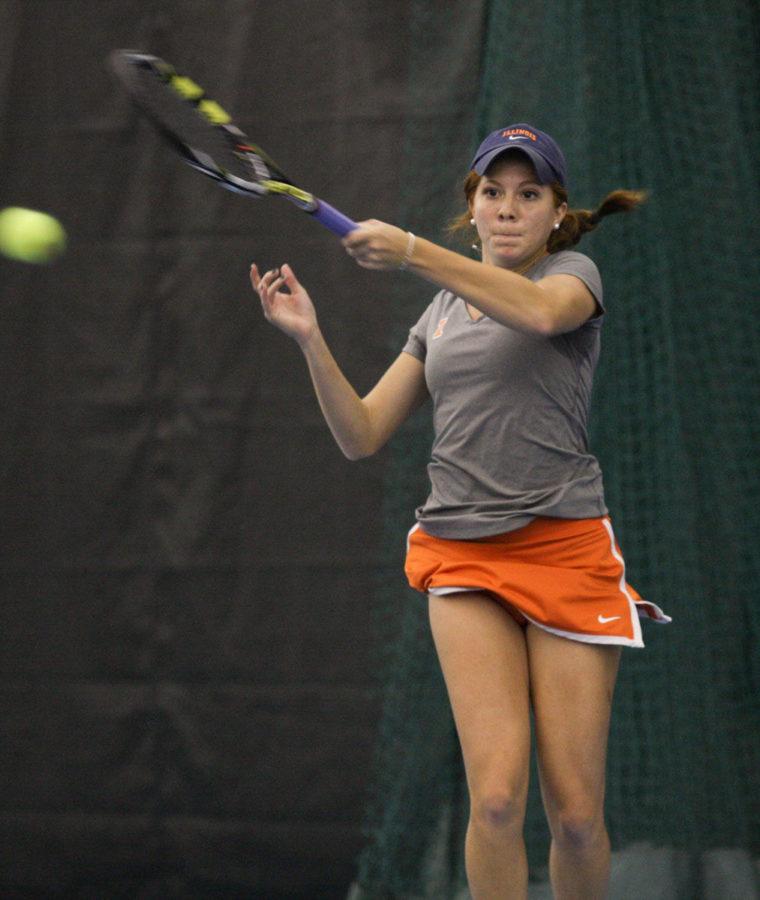 Illinois’ Madie Baillon hits the ball back during the Midwest Tennis Regionals at Atkins Tennis Center on Oct. 17.

In August, the Illinois women’s tennis coach Michelle Dasso said the fall season is really all just a preparation period for the spring season and Big Ten play.

As the team heads into winter break, this still holds true for Dasso and her team.

The team did not perform up to expectations toward the end of the fall, with all of its players taking early exits from the Midwest Regional — hosted at Atkins Tennis Center in Champaign — and the National Clay Court Invitational in Orlando, Florida.

Dasso said she is already focused on the spring.

“We got a good look at some potential doubles parings for the spring, which always helps,” Dasso said.

Dasso was also happy with the progression of sophomores Alexis Casati and Madie Baillon.

Baillon is a transfer from Illinois State who grew up in Champaign and joined the Illini this fall. Her experience lived up to her own expectations.

“It was awesome. I am really happy to be back in Champaign,” Baillon said. “There is a much better coaching atmosphere, and I am much more confident here. It is definitely reflecting in my play as well.”

Baillon added that the transition was not difficult at all. She fit in with the team well and already had a taste of college tennis from her days at Illinois State.

Casati has jumped to the front as one of the team’s best players, according to Dasso. She played against some of the nation’s best this fall, and Dasso feels she can compete with anybody on a tennis court. After this fall, Casati says she feels the same way.

“I go out every match with the mentality that I am going to play the best match I can and compete,” Casati said. “(For the spring season), I am planning on making sure all of our players are ready for every match, and are going to compete in every match.”

The team gets a month over break to train individually, away from the coaching staff. Some players are using this time to do private training, but freshman Jade Hilton, sophomore Louise Kwong and senior Melissa Kopinski are playing in a USTA tournament in Canada.

Kopinski, entering her final spring season, is focusing on match play over break. She said her fall season did not go as planned, but knows what she needs to do to be at her best this spring.

“I am going to work a lot more on being aggressive,” Kopinski said. “I am going to really focus on capitalizing on my shots and dictating the points.”

Cole can be reached at [email protected] and on Twitter @cole_Henke.