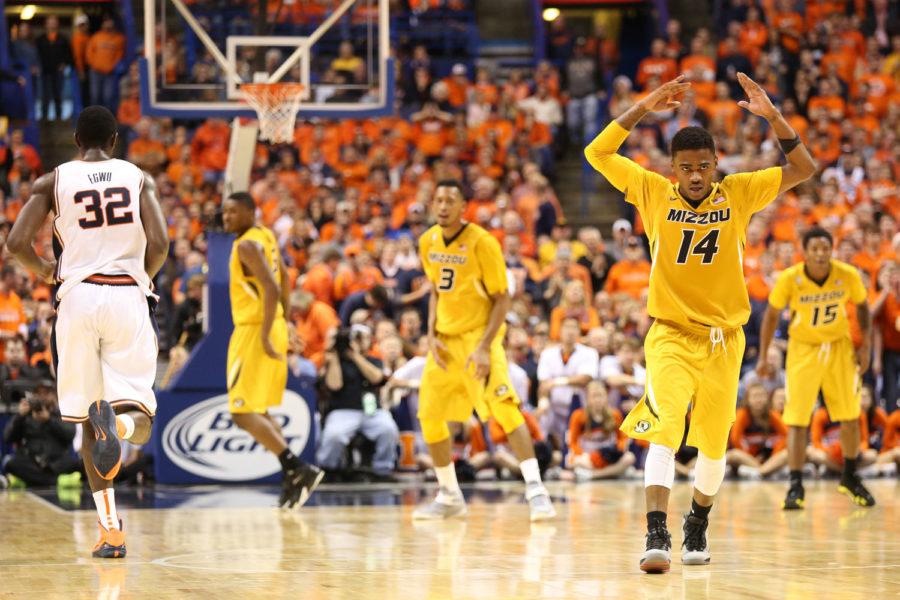 Missouri’s Keith Shamburger (14) attempts to rile the crowd during the game against Missouri at Scottrade Center in St. Louis, Missouri on Dec.20, 2014. The Illini won 62-59.

ST. LOUIS — Rayvonte Rice was quiet for most of the first half. The Scottrade Center crowd was not.

After finishing the first half with eight points, Rice carried the Illini offensively for stretches in the second half and finished the Braggin’ Rights game off on a high note with a fade away buzzer-beating three from the left side of the key to seal a 62-59 win for the Illinois men’s basketball team.

The crowds for both Illinois and Missouri maintained a high level of intensity throughout the game — an electricity Illinois hadn’t experienced yet this season. The thousands of fans created energy that both teams fed off of as they traded leads in the second half.

For Illini coach John Groce, it didn’t take much to describe the atmosphere.

Senior guard Ahmad Starks compared the atmosphere to that of the Oregon vs. Oregon State rivalry he was a part of for the first three years of his college career as a member of the Beavers.

Starks mentioned the intensity of the fans who were “going crazy” throughout the game. He said the rivalry between Missouri and Illinois was “right up there” with the other rivalry games he’s been a part of in his career.”

“(I) loved this one and I hate that I only get one chance at it,” Starks said.

The energy was present from both the Illini and the Tigers in the first half as hard fouls and tenacious play seemed to sour the attitude between both teams.

Freshman forward Leron Black committed both a hard foul and a technical foul in the first half and seemed overcome by the emotions of the game.

Leading the way for Illinois were Rice and Starks, who finished the game with 16 and 13 points, respectively, and carried the Illini offensively for stretches in the second half.

While the energy hovered in the arena throughout the game, the noise from the Illini fans might have been at its highest when Rice hit a deep three from the right wing to tie the score at 50.

With each lead change, one side of the crowd would stand and cheer before a shot from the other team quieted it.

It wasn’t just the made shots the got the crowd going, in fact two timely rebounds from junior guard Aaron Cosby elicited equally loud reactions as shots from Rice or Starks.

The back and forth exchange of energy continued until for the rest of the game, with each play bringing cheers from one side of the arena or the other.

In the end, as Rice stumbled backward and was tackled by teammates near the scorer’s table, the Illini fans seemed to let out a sigh of relief before exploding into cheers one final time.

The cheers continued until Rice had returned to his feet and hoisted the Braggin’ Rights trophy above his head.

After the game, Missouri’s head coach Kim Anderson praised both Rice and the Illini and acknowledged the “great atmosphere” before surmising the feelings of the fans, players and coaches throughout the game.

“(It was a) great college basketball game,” Anderson said.