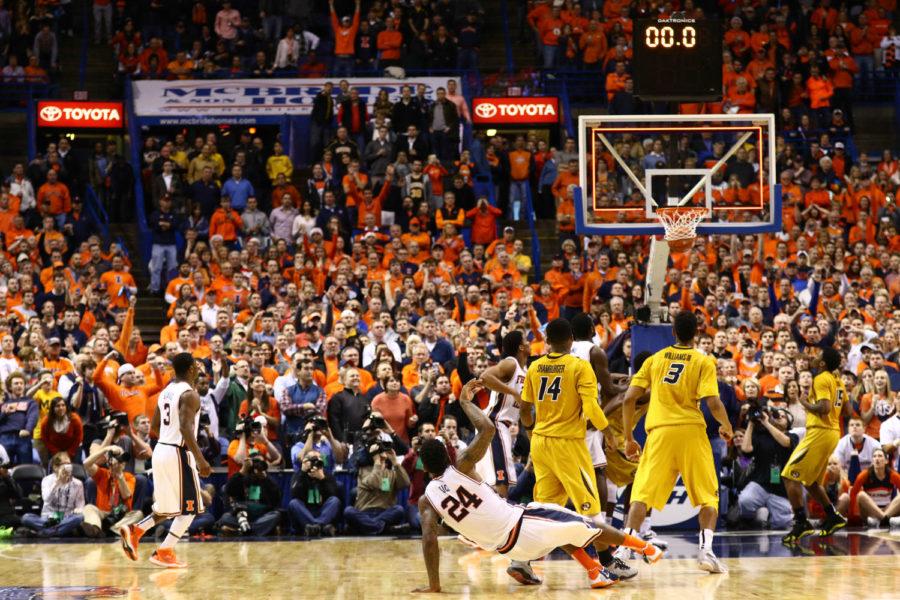 Illinois’ Rayvonte Rice (24) takes the game-winning shot during the game against Missouri at Scottrade Center in St. Louis, Missouri on Dec.20, 2014. The Illini won 62-59.

ST. LOUIS – There was little doubt the ball was going to be in Rayvonte Rice’s hands.

As the seconds faded off the clock, Rice fell back from beyond the arc to put up a long three. The senior guard buried a shot over two Missouri defenders as the clock ran out, igniting an eruption on, and off, the court. Illinois’ bench mobbed Rice in front of the scorer’s table and the Scottrade Center exploded.

Rice’s buzzer-beater gave Illinois (9-3) a 62-59 win over Missouri (5-6) Saturday afternoon, keeping the Braggin’ Rights trophy with the Illini for a second straight year.

Rice said it was the biggest shot he’s ever made in his career.

“I saw it go in and then they tackled me,” Rice said. “I didn’t see anything after that in the dog pile.”

Illinois coach John Groce said one of the initial thoughts that ran through his head was that Rice deserved the moment.

“He works when no one’s watching,” Groce said. “Ray has made himself into a shooter. He’s self-made.”

The senior ended the game with a team-leading 19 points and seven rebounds, and leads the Illini with 17.3 points per game this season.

Illinois’ offense struggled as a whole throughout the game, shooting just 22.2 percent (4-for-18) from behind the arc. But the Illini were able to stay ahead of the Tigers, forcing 14 turnovers.

There were eight lead changes in the game and it was tied 10 times. Illinois’ largest lead (six points) came midway through the second half, but the Tigers continued to hang around, shooting 44 percent from the field.

Clark hit a jumper to tie the game for Missouri with 17.8 seconds to go before Rice’s game-winning shot.

Missouri coach Kim Anderson called a time out and said he told his players to expect the ball to go to Rice for the final shot.

“We thought that’s what they’d do,” Anderson said. “That’s who I would’ve given it to too.”

Starks, who has struggled offensively alongside Cosby as of late, said he was happy to see his teammate have an impact. Starks also shared a similar feeling towards Rice after the game.

“I don’t think I’ve ever been in a situation (like Rice’s buzzer-beater),” Starks said. “I just wanted to give him a big hug.”

But as senior center Nnanna Egwu lifted the Braggin’ Rights trophy over his head and carried it off the court, there wasn’t a thought of the Illini’s struggles throughout the game. Despite unimpressive numbers in the final box score, the final read “62-59” and Illinois was the one with the trophy.