Illinois basketball wins behind solid shooting from Nunn and Cosby 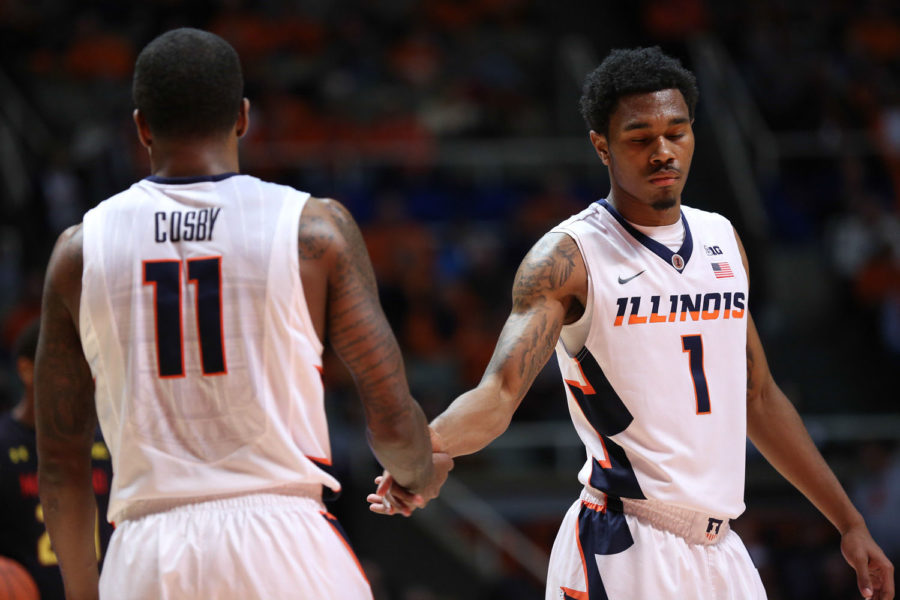 EVANSTON, Ill. — Although sophomore guard Malcolm Hill only finished Wednesday night’s game with eight points, it was the sophomore guard’s final two points that were the most important.

Hill’s two free throws gave the Illinois men’s basketball team a 72-67 lead that would serve as the final score in a hard-fought win against Northwestern. While Kendrick Nunn led the Illini with 25 points in the game, including two pairs of clutch free throws to keep Illinois in the lead with under a minute left, it was Hill’s free throws that finally put a gritty Illinois victory out of the Wildcats’ reach.

Hill and Nunn’s free throws iced the game, but it was the offensive explosion of Nunn and Aaron Cosby that kept Illinois in the game against Northwestern and eventually gave the Illini the win.

“That was a great college basketball game,” head coach John Groce said. “Fortunately for us, we were able to win it.”

Both the Illini and the Wildcats were hot from beyond the arc in the first half. While both teams shot over 41 percent from 3-point range in the first half, Northwestern capitalized on its hot shooting to build a 13-8 lead early on.

Although Aaron Cosby missed his first two shots of the game, the junior guard proved to be the Illini’s answer offensively, as he found his shooting stroke and knocked down two threes of his own to give the Illini a 14-13 advantage.

Cosby’s hot shooting continued for the remainder of the half as he led the Illini with 15 points at the half and finished the game with 19. Nunn added 12 of his 25 before the break as the Illini rode out a 7-0 Northwestern run to take a 37-33 lead into halftime.

“I feel pretty confident,” Nunn said of his play against the Wildcats.

The Illini opened the second half with a bang as senior center Nnanna Egwu threw down a monstrous dunk which was followed by a Jaylon Tate steal and alley oop to Nunn that quieted the Northwestern fans and gave the Illini a 43-35 lead.

Illinois strung together good possessions in the second half and expanded its lead to 10 points, but the Illini had trouble widening the gap over Northwestern.

Illinois and Northwestern traded buckets down the stretch with the Wildcats pulling within three, at 66-63, with 17 seconds left in the game. Just as the Illini had done in the first half, Illinois weathered Northwestern’s final push and came away with the win.

“We played with a lot of purpose,” Groce said.

Although Northwestern finished with a higher shooting percentage from the field, Groce thought the way the Illini played on the offensive end was promising. The Illini finished the game at 41.9 percent from the floor and 33.3 percent from three.

“It was as good as we’ve played offensively in a while,” Groce said.

While Illinois’ three turnovers, compared to Northwestern’s 10, contributed to the Illini win, Groce credited the victory to the team’s clutch shooting.

“Had (Cosby) not made a lot of those shots, we wouldn’t have been coming out with a win,” Groce said.