Wins against the Wildcats (10-7, 1-3 Big Ten) haven’t come easy lately, especially at Welsh-Ryan Arena. This one came down to the wire, with both teams exchanging free throws near the end as Northwestern hung around until the final seconds. But the shorthanded Illini pulled it out to improve to 12-6 on the season (2-3 Big Ten), and the positives they showed were undeniable.

The Illinois guards came out of the gates firing, as Aaron Cosby and Kendrick Nunn each knocked down three 3-pointers in the first seven and a half minutes. Nunn hit his first two threes of the game, and Cosby followed up with two more in a row.

Their offensive production continued throughout the contest as Nunn finished with 25 points and Cosby 19. Both had their best games of the season, and Nunn’s game was his best in two years in an Illini uniform. Nunn did it all offensively, operating smoothly and efficiently. The Cosby/Nunn duo shot a combined 15-for-28 from the field, including 8-for-15 from three.

While Nunn was the best player on the floor Wednesday, you can’t say enough about Cosby’s performance. The transfer junior has had more than his share of struggles nearly all season long, but against the Wildcats, he did what Illini head coach John Groce brought him to Illinois to do. He stretched the defense with four threes in the first half and attacked the lane effectively when the defense played him tight.

Both Nunn and Cosby’s play was very encouraging, and Illinois will be in good shape going forward if both continue to play aggressively. But perhaps the most impressive aspect of the victory was the fact that the Illini had just three turnovers — the Wildcats had 11 — and the three came off the ball. That’s incredible. Northwestern’s defense was nothing special, but it shows the Illini are capable of taking care of the ball at an extremely high level, and it was likely the difference in the game.

Illinois’ defense wasn’t great, but that’s probably due to the fact that defensive specialist Nnanna Egwu was limited to 26 minutes with foul trouble. The Illini effort was certainly there, but Northwestern got solid contributions from Alex Olah and Bryant McIntosh, who kept Northwestern in the game. McIntosh’s 16-point performance was especially impressive, as he’s been hampered with a left foot injury. He hobbled out of the locker room after the game in a walking boot.

Northwestern scrapped and clawed, and the game tightened up at the end. The Illini bended, but didn’t break like we’ve seen them do several times this season.

A big reason Illinois was able to seal the game (and the Maryland victory as well) was due to an unbelievable stretch of shooting at the free throw line. The Illini shot 12-of-14 against Northwestern, and are now shooting an eye-popping 78.3 percent from the line on the season. That’s good for second in the entire nation. Almost every game will likely be close from here on out, and good free-throw shooting is a luxury to have.

The Northwestern game was essentially a must-win game for Illinois’ NCAA tournament hopes, and the Illini took care of business. When looking at the beginning of their conference schedule (even before Rayvonte Rice went down with a broken hand), escaping with a 2-3 record in their first five would be satisfactory, considering that four of those games came on the road. Illinois grinded out two wins, and its schedule until Rice’s expected return doesn’t look too daunting.

The Illini now come home for back-to-back games with Indiana and Purdue, and there will be a lot riding on both matchups. NCAA tournament dreams are on the line, and every game counts from here on out.

And for an Illinois team sporting a 7-0 record so far at State Farm Center, there’s no place like home. 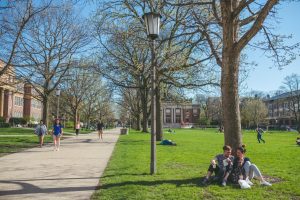