Bands play covers for charity at The High Dive 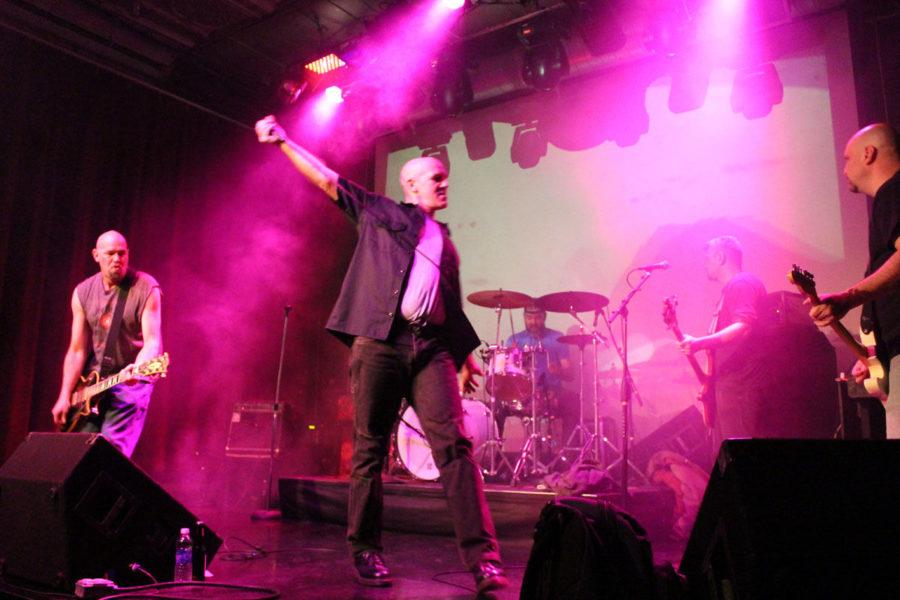 Sixteen Tons performed last Thursday at The Highdive as part of the 24th annual Great Cover Up. It was the band’s first show in 20 years.

For two weekends in January at The Highdive in downtown Champaign, the 24th annual Great Cover Up — a benefit for regional charities — brings together local acts, new and old, to transform into tribute bands.

The idea of seeing a cover band may seem like a step down from seeing the original, but the annual benefit series has become something of its own. The benefit kicked off Thursday, continuing Friday and Sunday night. The event will conclude with two final days of performances Thursday and Friday.

The Cover Up not only showcases the best of favorite local acts, but brings to surface the strong sense of camaraderie for the local music community. Newly developed bands get the chance to share the stage with local veterans while the quietest of indie bands can transform into screaming, devil-worshipping metal heads on stage.

According to the official Facebook page, Dave Landis, graphic designer for local music staple Didjits circa 1991, was responsible for the creation of the Great Cover Up. Landis came up with the idea as a benefit for the Muscular Dystrophy Association, and when he pitched the idea of a cover band benefit to several of the most popular bands during that time, all of the bands asked to participate agreed. The first two years consisted of one night and six bands, and “the line to get in the bar was out the door and down the block.”

After Dave Landis left, Gollings took over and has been running the Cover Up ever since, evolving the benefit from a six-band, two-night event to five nights and nearly 30 bands.

Although the benefit organizations have changed throughout the years, the 2015 event’s proceeds will go to Cunningham Children’s Home, Bart Tredway Trust Fund and the Greater Community AIDS Project.

Jim Kelly, label manager for Parasol Records and drummer for Sixteen Tons, was part of the first lineup that made the Cover Up what it is today.

“I played the first four Cover Ups with Sixteen Tons, and I remember them all as spectacular affairs. It was fun to rehearse and perform these great songs and even more awesome to see what our peers were pulling out of their hats as well,” Kelly said. “I’ve played seven Cover Ups, with this year being my eighth. 1994’s Big Black set sticks out to me for the story behind me getting to the show and the fact that it was Sixteen Tons last show prior to our reunion 20 years later.”

As a veteran who has seen the benefit evolve into what it is today, Kelly explained how the Cover Up hasn’t made extensive changes in his eyes.

“The key ingredient seems to be a really fun, appreciative atmosphere, some seriously powerful sisterhood/brotherhood in the local scene,” he said.

With the Cover Up only centering on bands performing covers, Ward Gollings feels that it gives peers of the scene a night to mix things up.

“It gives bands who play original music a chance to step outside their normal agenda and have some fun. Some play homage to an influence or hero, others pick something silly and tongue-in-cheek,” Gollings said.

In terms of being silly, Andrew Kling, front man of The Dirty Feathers, embraces the event’s performance freedom and creativity.

“This will be our fifth year doing this. Last year we did Iggy and The Stooges, and I was out of my mind and covered in oil and glitter,” Kling said. “We’ve done The Who, The Rolling Stones, and the first year we were the backup band for Kayla Brown as the Yeah Yeah Yeahs.”

The Dirty Feathers, who are putting out a new album later this year, are no strangers to going the distance for their performance, replicating their chosen band to be as eccentric and far-out as the original.

“I think The Who was the most fun. We set off some fireworks on stage, smashed a guitar and a bass drum,” Kling said. “Doing The Rolling Stones with the local celebrity Aaron ‘A-Rock’ Davidson as our own Mick Jagger was seriously fun. Our songs kind of revolved around him and following his cues, but you can’t put a leash on a tiger.”

The Great Cover Up is nothing shy of a great time, but for fans and musicians, it’s also a trip down musical memory lane, allowing old-school favorites come to life again.

“All the bands we’ve done have been some of my all-time favorite bands, so it’s pretty fun to learn and play these songs that I’ve listened to since I was a teen. Playing the chords to ‘Baba O’Riley’ or ‘Jumpin’ Jack Flash,’ and you get a sense of why these old timers are still out touring, cause it’s a fucking incredible feeling,” Kling said. “I also feel that as a band, we learn something each year and it makes us a better band.”

Fran can be reached at [email protected].