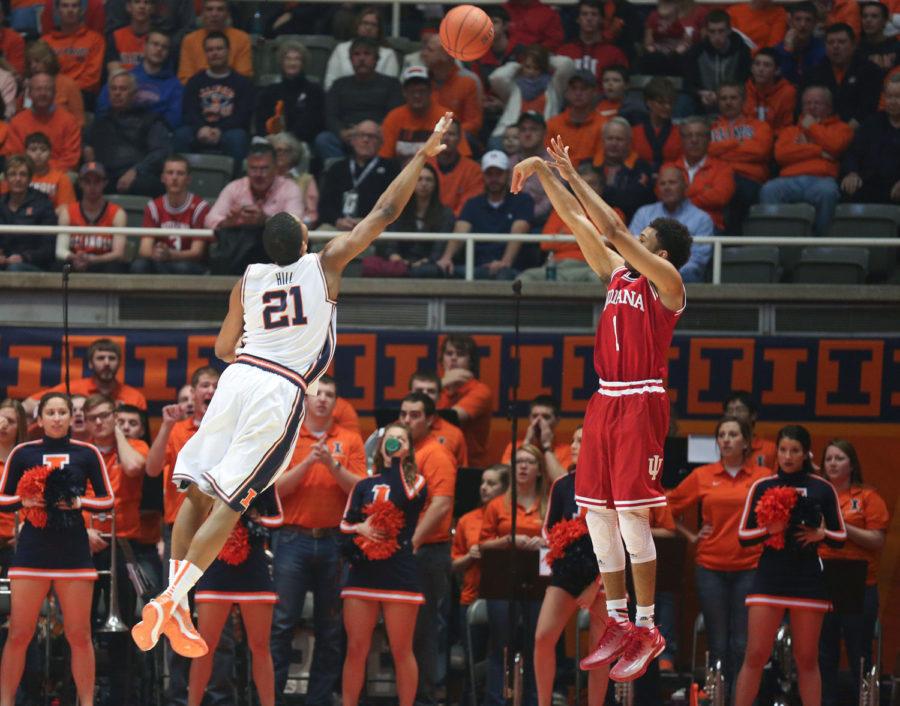 The Illinois basketball team brought out all it had to offer Sunday afternoon, but fell to Indiana, 80-74.

The Illini ran onto the court in throwback Flyin’ Illini jerseys as pyrotechnics went off before the record-breaking sellout crowd of 17,085. Groce even wore his orange blazer.

But Illinois’ offensive performance wasn’t enough to mask its defensive troubles in a back-and-forth game that saw seven lead changes.

Illinois began the game on a 9-0 run on three consecutive 3-pointers by sophomore Kendrick Nunn. Nunn ended the game with 24 points on a career-high six 3-pointers.

Illinois held a 14-3 lead early, but a 14-2 Hoosier run put Indiana ahead midway through the first half — a consistent trend throughout the game. Indiana’s Troy Williams and James Blackmon, Jr., both had 21 points Sunday.

“We weren’t real thrilled with our transition defense in the first half,” Groce said.

The Illini allowed 24 points in transition in the first half.

Illinois’ erased a 10-point Hoosier lead in the second half on a 21-2 run, going up 61-52 midway through the second half behind a lead-changing three by junior Ahmad Starks. Starks ended the game with 19 points on five threes.

“Our team is starting to find more of a rhythm offensively,” Groce said. “Defensively is where I’m most concerned. You have to defend, rebound and take care of the ball.”

The Illini made 12 threes and shot 47.3 percent from the field, but couldn’t contain the matching Hoosiers offense. Indiana had 11 threes of its own and shot 48.2 percent on the game.

“We’ve got to clean up the defense,” Starks said.

Indiana ended the game on a 13-2 run to cap off a back-and-forth win.

Senior center Nnanna Egwu fouled out with zero points and just two rebounds in 27 minutes. He wasn’t able to grab his first rebound until the 17:27 mark in the second half, as the Hoosiers out-rebounded the Illini 31-25 despite a career-high from freshman Leron Black (nine).

“Nnanna didn’t have a great game,” Groce said. “He didn’t affect the game on the glass. We do need him to be a little more productive.”

Illinois’ loss pushes them further from the NCAA Tournament picture, dropping to 12-7 on the year with just under a month and a half remaining in the season.

The Illini found their trouble in closing out another game in which Groce said “the margin for error is so small.” But for Illinois, Groce’s hope is that his team can close out the season.