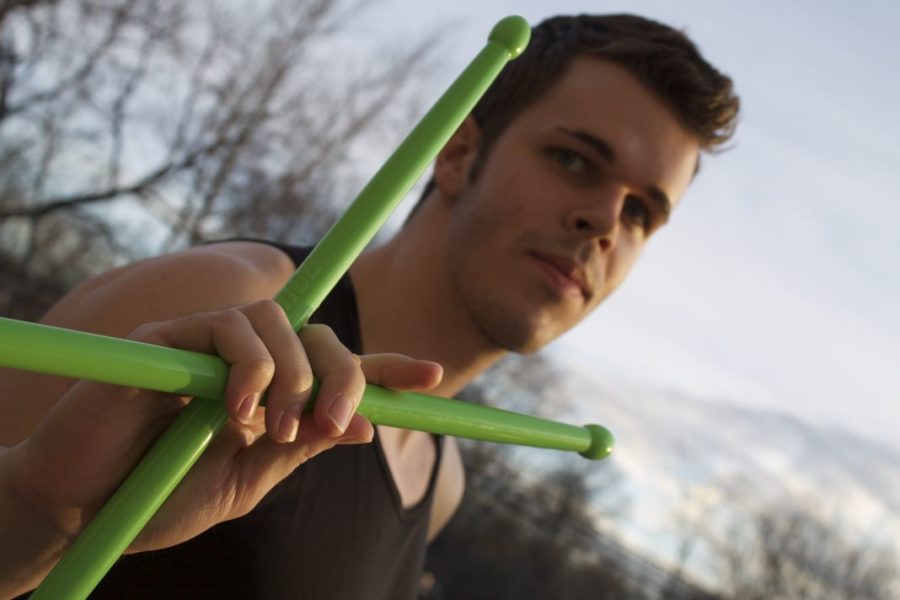 David Robertson, senior in Media, will be teaching the POUND class at the ARC this semester. The class will be a new addition to the group fitness options at Campus Rec.

A new group fitness class marches to the beat of its own drum.

The POUND class, which combines rhythmic drumming with high-impact workouts, will be taught by David Robertson at the ARC at 6 p.m. every Thursday.

Robertson, senior in Media, said the workout is “totally something new and inventive that we’ve never had at Campus Rec before.” The program is pioneering at the University because no other major university in the nation has a certified program, according to Robertson.

POUND, created by drummers and fitness experts Kirsten Potenza and Cristina Peerenboom, uses Ripstix, which weigh twice as much as a standard drumstick, according to Robertson.

“While that seems like a very small difference, when you’re waving those around in the air and hitting them together for an entire hour, the amount of work that you’re doing, the difference is huge,” he said.

Ripstix are provided with the class and are the only special equipment required. They also provide a unique satisfaction.

“You’re actually hearing the work you’re doing,” Robertson said. “What a great way to relieve stress and anxiety from the week than hitting the floor and hitting the sticks together.”

Chris Hedlin, graduate student in English, participated in the demos, which took place in the middle of December, and attested to the benefits of the sticks.

“I felt like using the drumsticks also helped me push myself,” she wrote in an email. “I sat deeper into my squats, for example, because it was fun to be able to hit the floor with the drumsticks.”

Working in time with the rhythm also distracted from the intensity of the workout and made it more enjoyable, according to Hedlin. The upbeat, modern music was also a draw.

“I know some people think because we’re using drumsticks; the whole class might be rock music, but that’s not the case,” Robertson said.

Some of the artists he uses include Skrillex, Britney Spears, DJ Snake, Dillon Francis, Fitz and the Tantrums and Iggy Azalea.

Some other exercise classes license their own music or use low-quality covers of songs, according to Robertson. Purchasing all of their music from iTunes means this will never be the case for POUND, because “the creators really believe in supporting the music industry,” he said.

The instructors are also encouraged to choreograph their own workouts in order to keep up with the newest releases, meaning workouts are frequently refreshed. Robertson said his class will be a mix of his own choreography and established workouts.

Playing the piano for 15 years and being involved with choir and musical theatre allowed a “perfect fusion of my love for exercise and all that musical background,” he said.

While the emphasis on rhythm is a natural appeal for musicians, Robertson said he plans to spend the first 15 minutes of the hour time slot to explain musical terms like “4/4 time,” as well as the unique moves in each routine.

The workout tracks are categorized by muscle focus, according to Robertson. Set tracks require doing all moves from a squat position and lunge tracks use a lunge position. TNA (thigh and ab) tracks entail lying on the ground for hip bridges and core work. Kick tracks target hip flexors and use base kicks. All of these are combined with cardio to create an intensive workout.

Elyse Dillon, senior in AHS, also took some of the demo classes.

“It’s high intensity with tons of squats, lunges and core engagement,” she wrote in an email. “It’s a fresh and exciting new class that will break up any boring workout routine.”

Out of Robertson’s other group classes Dillon has taken, she wrote this was the most challenging.

The class sizes have a capacity of 35 to 50 people, due to Ripstix availability. Though only one day a week is scheduled, more days could be added if there is high demand.

Robertson said he was drenched after his 25-minute demo, but the fun of the music and group setting makes the exertion less noticeable.

“It’s really rewarding when the whole class is doing it together,” he said. “It’s so cool to hear everyone hitting on the same beat and you totally forget that you’re exercising and doing a workout.”

Anyone can participate Thursday during Campus Rec’s free week, which began Tuesday and runs until Jan. 27. Students who want to continue will need to purchase a group fitness pass for the semester.

Robertson recommends standard workout clothes such as leggings, yoga pants and basketball shorts. Though some tracks are shoes-optional, he suggests footwear due to the intensity of most of the routines.

Robertson said he was excited to bring POUND to campus and be on the cutting edge of fitness trends.