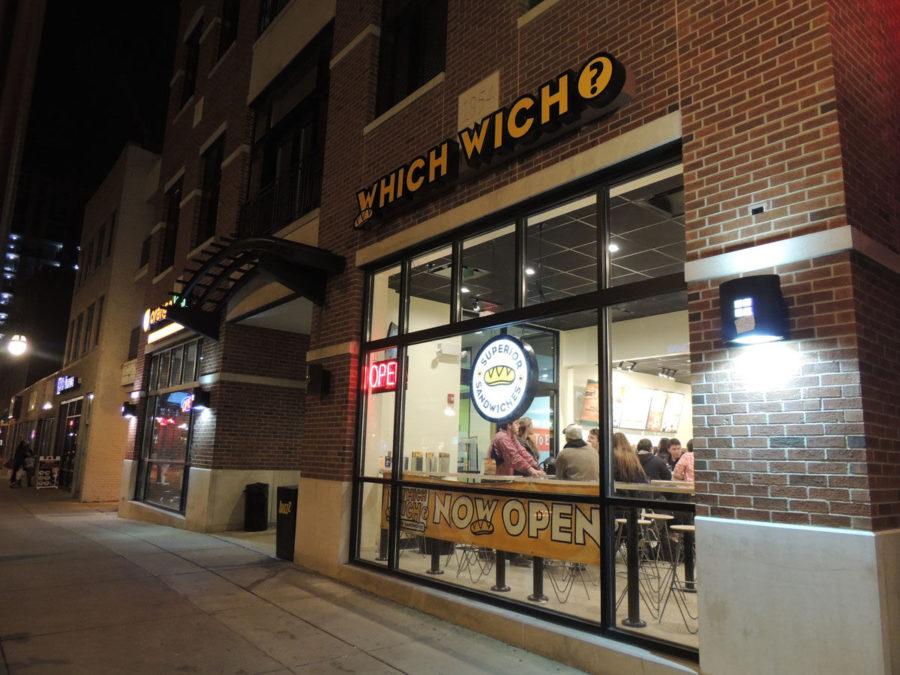 After opening on Dec. 15, Which Wich, located at 512 E. Green St., has become the newest customized sandwich shop on campus.

The decision of what to eat between classes and around 2 a.m. is now even more challenging for University students.

Which Wich opened at 512 E. Green St. on Dec. 15 as a create-your-own sandwich shop hoping to impress the Champaign area with its plethora of options and student deals. Which Wich is open from 10 a.m. to 12 a.m. Sunday through Wednesday, and it will stay open until 3 a.m. Thursday through Saturday.

Currently, there are over 300 Which Wich locations across the globe, nine of them being on college campuses. According to Jeremy Cook, the vice president of real estate and construction, the chain is set to open up on 10 more campuses in the near future after postive feedback from current locations.

Which Wich offers a total of 51 different types of sandwiches.

“We’re the only ones with this many options,” said Brijesh Patel, owner of the Green Street location.

Patel became familiar with Which Wich when visiting Houston with his brother, who introduced him to the company. What he said he appreciated about the product was that it was natural and fresh.

Having received positive feedback from other large universities, Champaign was an obvious destination.

“College towns have very good traffic,” Patel explained. “Some students are hungry, some students want to work part time; either way, these restaurants are doing well on campuses.”

The ordering process is what makes Which Wich unique. Customers will receive a brown bag, a sharpie and a sandwich selection list, including meats, gyros and vegetarian options. From here, customers choose their type of bread, whether it will be hot or cold, and the size. After the foundation is laid, customers may choose from over 60 unlimited toppings. Finally, they’ll hand their bag labeled with their name to the cashier in order to receive which ‘Wich’ they desire.

“Our concept is based upon the brown paper bag,” Cook said. “If you go out to the other sandwich shops, none of them have this customization process. You can create whatever you want, whatever the case is. It’s your own and personalized.”

Besides allowing customers to build their own sandwiches, Which Wich prides themselves on the amount of options they offer.

“We have 12 different cheeses, three types of onions and a multitude of spices,” Patel said.

And this is only the beginning. Which Wich also offers five vegetarian options — hummus, black bean patty, tomato, caprese and artichoke hearts — as well as a kids’ menu. The Which Wich headquarters in Dallas promoted their concept by stating, “Bending the rules of the sandwich world is our specialty.”

The variety and freedom of choice is not the only thing that Which Wich believes will draw college students. In addition, the store offers different student deals and provides ways to earn rewards.

Upon joining, students will automatically receive two free sandwiches, one for signing up and one on their birthday. There is a special offered each month as part of Vibe Club, and finally a punch-card that will give students a free sandwich on their 11th purchase.

Of course, Which Wich is a sandwich shop amongst many others that line Green Street. When asked about the competition, Patel doesn’t exude concern.

“We’ll put something special out for students, and our food is good,” he said. “I’m expecting it to do well.”

Rachel can be reached at [email protected].