Optimism may make a healthy heart 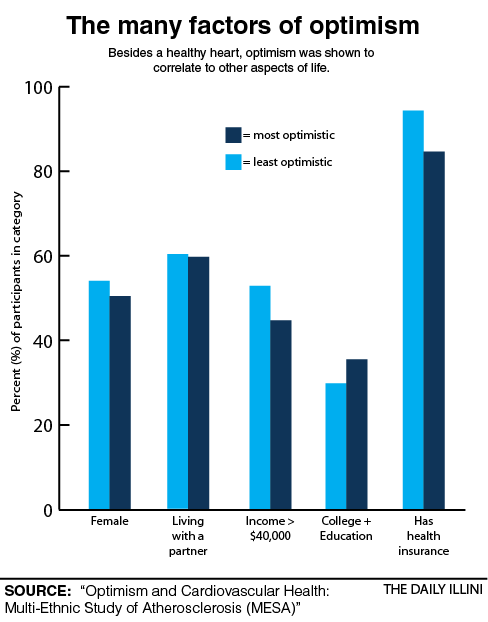 It turns out being happy could lead to more than just feeling good — it could also be associated with good health.

A new study suggests a link between having a positive attitude and being in better cardiovascular health in comparison to people who are more pessimistic.

Researchers from the University of Illinois, Northwestern University, Chapman University, Harvard University and Drexel University conducted the research based on data gathered by the Multi-Ethnic Study of Atherosclerosis, which followed and surveyed about 5,100 U.S. adults aged 52 to 84.

Over a span of 11 years, participants’ cardiovascular health was assessed based on factors such as blood pressure, physical activity, body mass index, blood sugar, cholesterol, diet and whether they smoked or not. Their optimism levels were also captured in a questionnaire.

Results of the study found that people with the highest levels of optimism were two times more likely to be in ideal cardiovascular health when compared to pessimistic individuals of the same age and sex.

Rosalba Hernandez, professor of social work at the University, is lead author of the study.

“I think the important thing (about this study) is that here we’re at least establishing a link, that there is some association,” Hernandez said.

While past research has looked into the effects that depression and anxiety can have on cardiovascular health and has shown more optimistic people are less likely to experience a heart attack, this goes beyond those studies to demonstrate the positive outcomes of optimism.

“This … examine(s) how a psychological asset — namely, optimism — can protect cardiovascular health,” said Julia Boehm, coauthor of the study and assistant professor of psychology at Chapman University, in an email. “Rather than just focusing on disease events, this study examines a more positive way to conceptualize health — not merely as the absence of disease, but as the presence of protective factors.”

The study does not determine whether optimism leads to better cardiovascular health or vice versa, but future studies will examine causality.

“Because this study assessed optimism and cardiovascular health at the same time, we can’t say which causes the other,” Boehm said. “That will have to be addressed in future research.”

Hernandez said this study gives researchers the ability to continue to do experimental studies to establish a longitudinal association between the two factors and further validate a link.

She also said she’s interested in further investigating the effect race and ethnicity can have on optimism.

Because an equal number of participants were selected from four ethnic groups — Caucasian, Latino, Asian-American and African-American — Hernandez separated the data gathered from each group and looked at the link between optimism and heart health within each.

“Although not significant, we did see … optimistic people in the Latino group were four times more likely to have ideal cardiovascular health,” she said. “So it kind of suggests that optimism in terms of heart health might even play a different role across different ethnic groups.”

Hernandez said this means future studies will need to disentangle not only why optimism and heart health are linked, but also whether the association differs by ethnic group.

If anything, results of this research might be enough reason to start each day with a positive attitude.