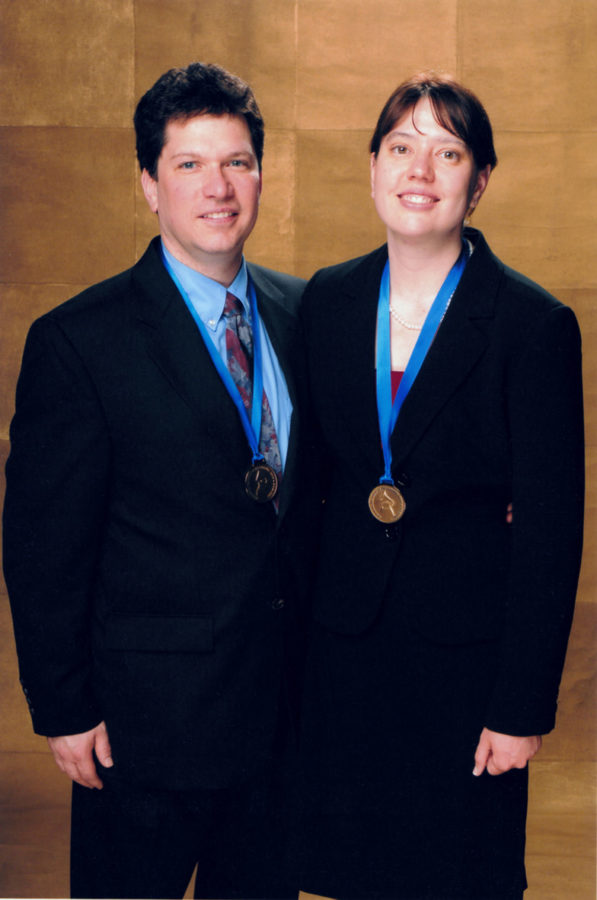 Meagan Hennessey and Richard Martin stand with their “Best Historical Album” Grammy for their company Archeophone Records in 2006. The Champaign-based company has been nominated twice for this year’s Grammys.

Meagan Hennessey is a manager of web services for the College of Business, updating websites and helping faculty with their sites. But what people may not know is that she won a Grammy — and may have another on the way.

With husband Richard Martin, Hennessey owns Archeophone Records, which means the archaeology of sound. Since launching the label in 1998, the couple has produced and restored albums from the years 1890 to 1925, known as the acoustic era of sound. Their albums have earned 11 nominations at the Grammy’s, five for their music and six for their writers’ album notes. In August, Hennessey and Martin released the album “Happy: The 1920 Rainbo Orchestra Sides,” which has been nominated for Best Historical Album and Best Album Notes at the 2015 Grammy’s.

“We kind of backed into it – (we) began to wonder what happened before rock n’ roll and began collecting records,” Hennessey said. “At some point we realized that they were at risk of not being preserved and no one was going to hear them or know about the music unless we started putting them out.”

Martin said he feels a special connection to the era of music because no one else in the world is focusing on it.

“We are the only place to get this material so we are very happy to have that advantage. We feel that is has been underrepresented, underserved, misunderstood, underappreciated, and we are aiming to open it up,” he said.

Martin explained that the acoustic era of sound is different from the music of the late 1920s and 1930s because it was made without electricity. He said it is just the power of the singer’s voice and instruments.

“We think it is beautiful. It has its own charm to it,” he said.

As the cofounders and only employees of the record label, Hennessey and Martin juggle many responsibilities. Martin focuses on the restoration of the records, transferring them to digital and doing distribution. Hennessey, in addition to her job at the University, works on the website and the e-commerce side of the business.

Together, the couple works on research, layout and design. They also search for records together.

Martin said that when they started nearly 20 years ago, they visited a lot of flea markets, haunted houses and antique malls. However, he said records are now long gone from most of those places.

They now look to online and private auctions.

“We have forged really close relationships with some world class collectors, and they are very interested in preserving American history,” Martin said.

Martin explained that the musician, Isham Jones, was a Chicago staple who had a band called the Rainbo Orchestra. He was well known for songs like “It Had to Be You” and “I’ll See You in My Dreams.” Jones made his first recordings in 1920 in New York, which are the basis of the album.

Martin said Jones gets ignored for his role in the transition between the social dancing music that was popular in the 1910s and the jazz of the ‘20s, and this album shows the tension in the arrangements.

“It’s got a lot of the old but it’s looking forward so it’s very exciting if you have a historical mind and an appreciation for the beauty of the arrangements,” he said.

Hennessey and Martin said their favorite album they produced was “Lost Sounds: Blacks and the Birth of the Recording Industry, 1891-1922,” which won a Grammy in 2006. They also cherish their experiences at the Grammy Awards.

Hennessey said that on Saturday, the day before the televised event on Sunday, there is a Grammy awards ceremony for lifetime achievement awards and technical awards. She explained that these are the awards they may announce on TV that were previously given out. She also said that there is no “velvet rope” on Saturday, so if you are famous and present, you are willing to talk to anyone you run into.

Hennessey and Martin also recall meeting Kathy Griffin. Hennessey said they showed Griffin where to get her medal that all nominees receive.

This year Martin plans on taking his mother as his plus-one.

“I’ve had my fun, now I can take someone who might appreciate it and might enjoy something that we’ve done,” he said.

Martin said the biggest challenge of having a record label is promotion. He explained that shortly after they launched, they were featured in the New York Times.

“We didn’t know anything about it and the phone was ringing off the hook. I can’t tell you what that does for business!” Martin said.

However, he said that the coverage declined after about eight or nine years. Now the couple is developing social media to get their name out there.

“Trying to raise awareness for something people have never heard of is a challenge,” Hennessey said.

Despite the obstacles they have faced, Hennessey said it is worth it when they are able to create something cool.

“This stuff is really the ultimate alternative music,” Hennessey said. “It was recorded live and they couldn’t mess with it or change it … it’s the opposite of autotune.”

Annabeth can be reached at aecarls2@dailyillini.com.