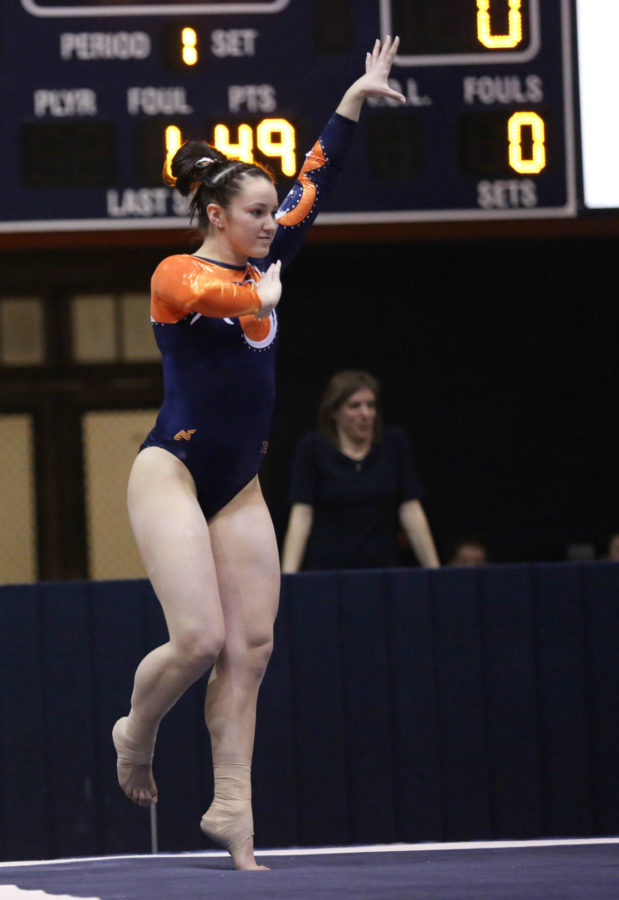 Last February, the Illinois women’s gymnastics team came up just short — 0.226 points to be exact — of defeating Michigan and ending its losing streak against its conference rival.

Illinois’ losing streak against Michigan stands at 43 meets, including head-to-head meets, Big Ten Championships, Regionals and Nationals. Overall, the Illini are 9-51-1 against the Wolverines, with the Illini’s last dual-meet victory over them occurring on Jan. 18, 1986.

“All of us kind of have memories from each year,” senior Kelsi Eberly said. “I know mine from freshman year; we had a couple falls on beam, and we could’ve beat them then. And then last year, we probably could’ve found some little details. So I think that every year it definitely reminds you, so I think it’s like our rebuttal and our second chance to do that.”

No. 11 Illinois will have a chance to break No. 4 Michigan’s streak Sunday at the Crisler Center in Ann Arbor, Michigan, but the history between the two programs isn’t changing Illinois’ preparations.

“We had a meeting on Monday, and we talked about (how) just because it is a meet against Michigan and because we do have a lot of history with them doesn’t mean that we should train any differently,” sophomore Sarah Lyons said. “We need to train smarter. We need to train harder. But it’s just like another meet, and we can still get a really great score that’s going to help our ranking.”

The Illini have progressed well so far with two meets out of the way and two wins under their belt. They won their opener at Central Michigan, 195.175-193.475. Then, Illinois increased its score in a 196.175-192.775 home-opening victory over Rutgers.

Illinois actually dropped two spots in the GymInfo rankings despite the scoring improvements. Lyons, however, still views her team’s work in a good light because it has built upon prior performances. But there are still improvements to be made, whether that be sticking more dismounts or improving leaps on floor.

“For each girl, it helps to find that half tenth, because those half tenths add up,” Eberly said. “Finding that one cast (handstand), or, like I said, the sticks -Just finding those details because we know it does come down to the end.”

Those details made a difference in Illinois’ loss to Michigan last season. It’s those details that allowed the Illini to build upon their score to start this season, so it’s those same details that will determine Sunday’s outcome.

But even as exciting as it would be to finally end Michigan’s streak, Eberly mentioned the Illini’s true goal is to do the best they can, because their current concern is themselves and their performance as a team.

“If we break the streak and make history, I think it says a lot about our team and about how we are a team that nobody really expects to see coming,” Lyons said. “But we’re a strong team, and we deserve to be up in the top spots.”