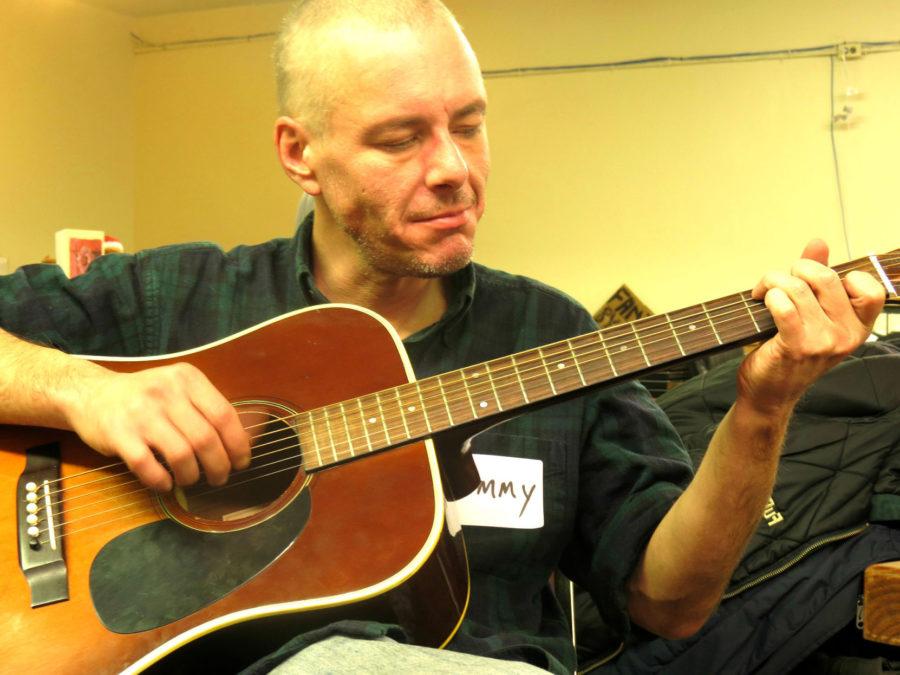 Tommy, a guest at The Phoenix, strums his guitar in the recreation room of the drop-in center on Dec. 16.

Melany Jackson looks across the room, her eyes observing the intimate community she created.

She sees two men and a woman, drifting off on a red leather couch. She watches her virtuoso friend Tommy, strumming melodies on his acoustic guitar.

She smiles. These are the moments that make her sacrifices seem worthwhile.

Hidden in downtown Champaign, The Phoenix, a daytime drop-in center for C-U at Home, opens its doors to those living on the streets. Day to day, the center Jackson founded provides shelter, food, musical instruments and a simple listening ear to all who pass through.

To those inside the center, Jackson is the woman who cares, the one who rounds the room to soothingly pat everyone’s back. To the rest of the Champaign-Urbana community, she is the executive director and creator of C-U at Home. But before the center opened, Jackson decided to follow an unpopular path. She sold her motorcycle. She lost her home. She gave up her chances at having a normal, traditionally successful life.

But on days like these, Jackson remembers her personal sacrifices were worth the chance to provide hope to those who thought they lost it on the street corner.

Before, Jackson roamed the streets of Champaign-Urbana as a volunteer for The Canteen Run, a mobile ministry that delivers food and clothing to the homeless in a retired-ambulance-turned-delivery truck. Four years ago on a November night, her truck parked in the IHOP parking lot, and she and the volunteers began distributing packages to those around the vehicle. At first, the stop seemed just like the rest of Champaign-Urbana, but Jackson soon noticed a sight that would break her heart: One of the men had black fingertips.

“I just thought that should not be happening on the campus of the University of Illinois,” Jackson said. “Somebody should not be getting frostbite.”

The team rummaged for any glove, blanket or scarf they could find. They encircled the man and began to pray to God — “please protect this man,” they asked.

But before the volunteers could mutter “Amen,” the homeless man opened his mouth to say his own prayer. It wasn’t about finding a home other than the campus street or getting medical attention to his fingertips. It was about the volunteers.

“Thank you for bringing people to come help us be safe and warm,” he said.

Before this encounter, Jackson had never met a homeless man. She had never spent a night in their shoes, and she didn’t think to immerse herself in their challenging lives.

But on that day, surrounded by volunteers, care packages and snow, Jackson found a man with many worries and responsibilities who still only cared about others.

“That was really the game changer,” Jackson said. “This guy from the street was talking to my God on my behalf … God used that moment to break my heart for people who were in that homeless situation.”

Jackson found the idea sitting on her bookshelf, inside a book entitled “Radical: Taking Back Your Faith from the American Dream,” which was given to her a month before the incident on Green Street.

As she read the words of David Platt, the work spoke to her strong connection to the Christian faith.

“The idea is, that in our country, materialism is a big part of most people’s lives — the house, the boat, the vacation home, the white picket fence,” Jackson said. “The book is a reminder that (a Christian) life (should be) much more sacrificial, both with money and time.”

Jackson realized she wanted to help the homeless population of Champaign-Urbana that was the most vulnerable.

By the time rain showers replaced snow in April, she had several ideas, but not enough resources to get started.

“I knew it would take time and money,” Jackson said. “And I didn’t have either one.”

She sold her motorcycle. She departed from her seminary books and her TV. She quit her part-time jobs. Those same possessions that seemed to make her life worth living months ago were no longer in the picture.

“I didn’t think twice about it. It was just a means to an end,” Jackson said. “It was just practical. You need money, so what do you have that’s worth money?”

By June, Jackson moved into Restoration Urban Ministries, a transitional housing program for the impoverished of Champaign, from living in a rental property to save money for the project she was developing.

For 18 months, she made Restoration Urban Ministries home. There she watched an immigrant struggle to gain citizenship and care for her kids. She met a woman who heard the gunshots that murdered her sister on the other end of a phone call. She watched countless people struggle with addiction, recovery and rehabilitation. She saw others trapped in their difficult situations and clawing for a way out.

Jackson was finally at the center of homelessness, discovering the ways she could get to the root of the problem.

“I spent a year-and-a-half with people who lived in this situation, learning compassion, learning that they’re really not as different as I might have thought,” Jackson said. “(The) homeless are just people. We’re all dealing with victories and defeats. There isn’t anything different just because they’re homeless.”

Now in 2015, Jackson has since moved out of Restoration and became the executive director of C-U at Home, aiding the homeless population as she originally aspired.

Jackson’s influence doesn’t just stop on the streets. Her touch extends to both the organization’s volunteers as well as board members.

“Her passion and dedication to helping others is something needed in our community,” said Kim Simpson, vice president of C-U at Home. “She’s putting her faith to action. Seeing someone who is so dedicated inspires me to do a little more.”

Jim Eisenmenger, one of C-U at Home’s board members, has seen his life change irrevocably since the first time he stepped foot in The Phoenix two years ago. Every day that he interacts with Jackson, it’s another chance to change himself and his community for the better.

“I’m not particularly the most social person. It’s not about, ‘Gee this person is homeless.’ I have trouble getting to know someone from any walk of life,” Eisenmenger said. “But Melany takes more risks. In a few months, she doesn’t know if she’ll even have a roof over her head, but she does that to continue this. It’s all different when you see Melany doing it; it gives you the courage to step out.”

Eisenmenger has now adopted five kids from Ethiopia, and his family regularly opens up their home to wayfarers in need of a bed.

“I can’t personally escape the hypocrisy of me saying, ‘Hey, that’s a great thing,’ and then not doing anything like it myself,” Eisenmenger said.

When Melany Jackson’s eyes scan The Phoenix, noticing Tommy playing another song on his guitar or three people taking a catnap, she doesn’t yearn for her old, safe life. She knows now that she doesn’t need money, fame or materialistic goods to make a difference. It was the help and selflessness of others that inspired her to return the same.

“Folks who have just a couple of pieces of bread or shirts are ready to give me one of them,” Jackson said. “That was a pretty powerful lesson to learn.”

Sarah can be reached at [email protected].