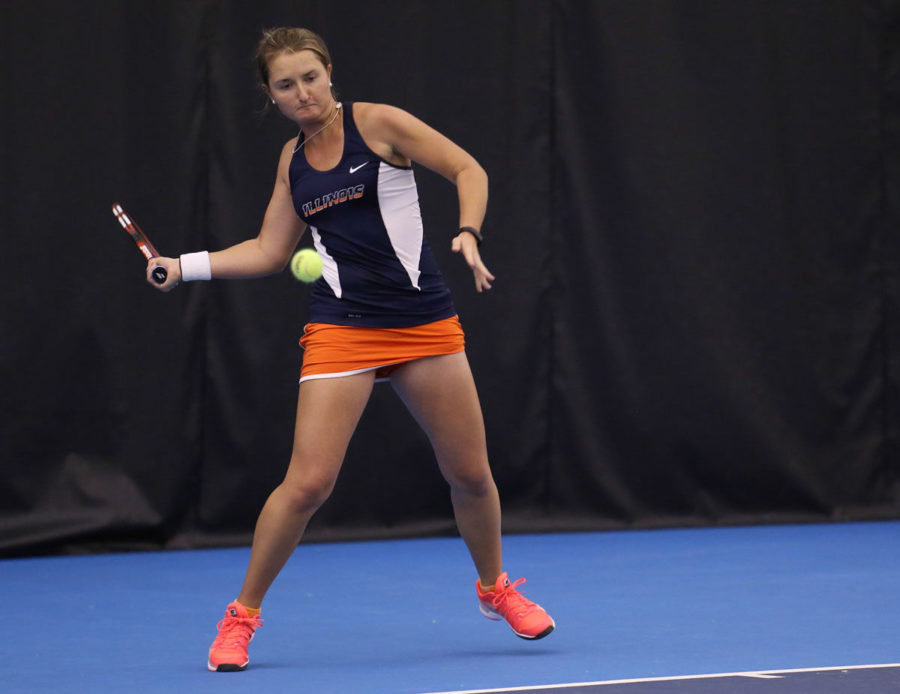 Illinois’ Melissa Kopinski prepares to return the ball during the meet against Illinois State at Atkins Tennis Center on Sunday. The Illini won 7-0.

The second half of a doubleheader for Illini women’s tennis Sunday featured Illinois’ sophomore transfer Madie Baillon taking on her old team, the Illinois State Redbirds.

Baillon, who only played doubles in the second match, left no time for any nostalgia, as she and her partner Alexis Casati won at the No. 2 doubles slot 6-2 in a little less than 30 minutes.

“Lex and I have great chemistry, and it honestly doesn’t matter who our opponents are,” Baillon said. “We know we have each other’s support, and we just went out there and got a win.”

Baillon and Casati, much like the rest of the team, simply overpowered the Redbirds and didn’t ever let them in the match. Illinois won with a 7-0 sweep.

Head coach Michelle Dasso thought the team looked sharper in doubles after a few close scores against UIC in the first matchup of Illinois’ doubleheader. The head coach had high praise for Baillon and Casati.

“(Baillon) has just made so many improvements if you look at her game a year ago,” Dasso said. “It’s really a credit to her work ethic.”

Illinois State only has two players returning from last year’s roster, and the team went through a coaching change. The program is much different from the one Baillon played on last season. Baillon didn’t play either of the girls she knew from last season’s team.

Baillon was quick to point out multiple parts of her game have improved in the time since she left Illinois State. Conditioning and consistency were the ones she hit the hardest on. She attributed her better conditioning to spending three days a week in the weight room with the rest of the team, something she didn’t do as frequently at Illinois State.

Baillon also talked about how the players in the Big Ten are just on another level, which can be seen in the scores of the match — Illinois didn’t drop a single set.

Dasso talked to Baillon about coming to Illinois before she graduated high school, but told her she should go somewhere and try to get as many matches as possible before she did come back to Illinois. That is exactly what she did as she played in every one of Illinois State’s dual matches last year.

Now that Baillon is in Champaign, Dasso thinks of her as a great addition to the team and thinks she brings a lot to the table in both singles and doubles.

Leading up to the match there were some doubts if, due to NCAA regulations regarding transferring schools, Baillon was even allowed to play against her former team. Worrying about that gave the last week a weird feel, but Baillon still practiced every day like she was playing a match.

Even though she did play her old team, Baillon still looked at it as normal match, but she did say that it was a good experience to have.

“It was good for all of us to play,” Baillon said. “We were ready to start the season, and everybody was itching for some wins.”

Cole can be reached at [email protected] and on Twitter @cole_Henke.