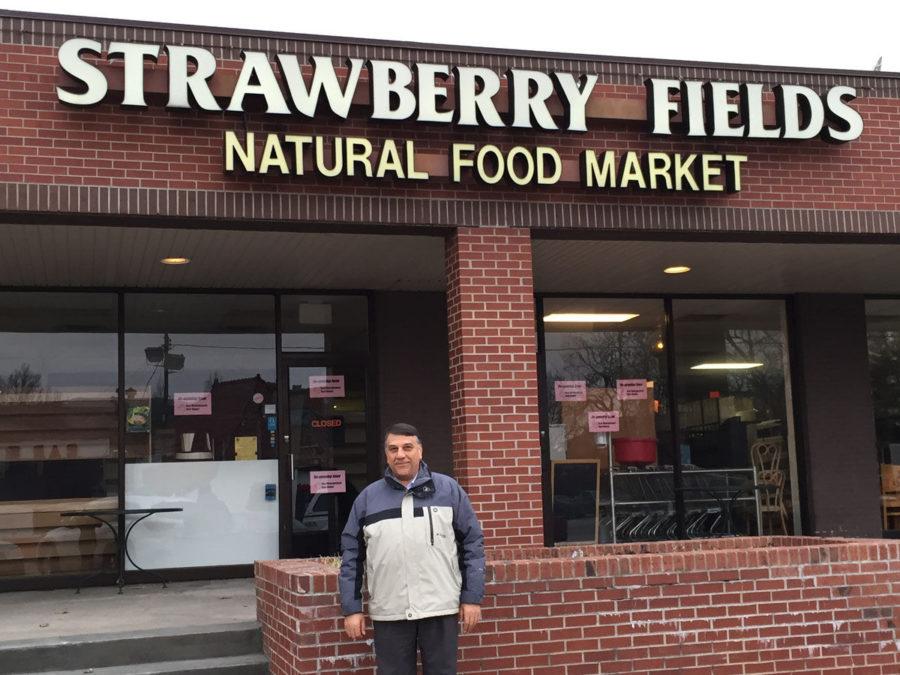 Mohammad Al-Heeti, owner of World Harvest International and Gourmet Foods, stands in front of Strawberry Fields as its new owner.

Champaign-Urbana lost a community staple on Dec. 14, when health food store Strawberry Fields closed after 40 years of business. But, much like strawberry harvesting season itself, a new Strawberry Fields will be growing in its place around late April.

Mohammad Al-Heeti, owner of World Harvest International and Gourmet Foods, purchased Strawberry Fields after being a customer since he moved to the United States in 1982. Al-Heeti was a fan of the food because it reminded him of food he had at home in Iraq. He will now be running both businesses.

“Our English teacher at that time gave us a field trip, and she took us to Strawberry Fields,” Al-Heeti said. “It used to be in a house in the area where Beckman Institute is. I loved it because they had the grains, they had the spices, they had the dried fruit.”

During his 22 years doing business in the area, Al-Heeti had a good relationship with Strawberry Fields. He said the businesses would recommend customers to each other since they carried similar merchandise.

Al-Heeti said he had great respect for the previous general manager, Jack Wallace.

“He has a nice heart. I’m telling you, that man is very special to me,” he said. “We cooperate with everyone because we are part of this community and we need to work together.”

It might seem like the area’s organic markets would be in competition. but Al-Heeti and Jacqueline Hannah, general manager of Common Ground Food Co-op, fully disagreed.

“I think it’s a really understandable assumption, an unfortunate one, but an understandable one,” Hannah said. “We see ourselves as local businesses and local food purveyors that are kind of in this together.”

Hannah said she was especially saddened when Strawberry Fields closed. Before leaving for Common Ground, she ran the kitchen in the store for five years and even met her husband while they were both employees. But the closing is more than a personal loss.

“We were really sad at the loss of the institution, and then beyond that,” she said. “As someone who works very hard for the local food community and farms I was just sad because we had lost a fellow advocate.”

According to Al-Heeti, Common Ground was one of the first businesses to send messages of support when he purchased Strawberry Fields.

“We were ecstatic, the whole staff was really excited,” Hannah said. “He just brings so much to the community. He’s an excellent businessman. He cares so much about C-U; he’s a great employer. We know that from his employees.”

Al-Heeti said he is trying to keep aspects of the original store by talking to past employees, as well as the previous owner and general manager.

“We want to have the natural and organic food,” he said. Local producers will still be used, such as Prairie Fruit Farm and Amish businesses. The produce and bulk food sections will be kept, along with the classic bread and coffee.

However, Al-Heeti does plan on revitalizing the shop with some major changes, including remodeling the interior to create a larger showroom and “make it more welcoming,” he said.

The makeover will entail working with Illinois ActOnEnergy to make the store more energy-efficient and minimizing the supplement and body section, according to Al-Heeti.

“Strawberry Fields, as it was, is a different animal than what I think Mohammad wants to do,” Hannah said. “I think he wants to keep the name and keep the focus on organic and local, which is wonderful. But I think he’s bringing back the deli.”

Before the deli closed, it was a heart of the community where people came for good food and conversation, Hannah said. “I think that’s exactly what people want, for one-third of the store to be a café again.”

The café will once again be open, with even more selections than before, according to Al-Heeti.

“We’re going to inject some healthy items in the menu from the Middle East because the person in charge for that operation, he is originally from that area and he has very good talent about food,” he said.

The deli will also include a salad bar, sandwiches, hot food, and a deli case for desserts. Many of the options will be gluten-free, Al-Heeti said.

The store will also not stock pork or alcohol, he said.

Due to the extensive remodeling, the store will not be open until late April at the earliest, but when it does Al-Heeti said the feedback from the community is what he will rely on when modifying the store, from student and senior discounts to popular products.

“I think the community’s very lucky. I think we all actually should be grateful to him for keeping the institution alive,” Hannah said.

In response to all the recent well-wishes, Al-Heeti could only say: “Thank you, everyone.”

Lillian can be reached at [email protected]