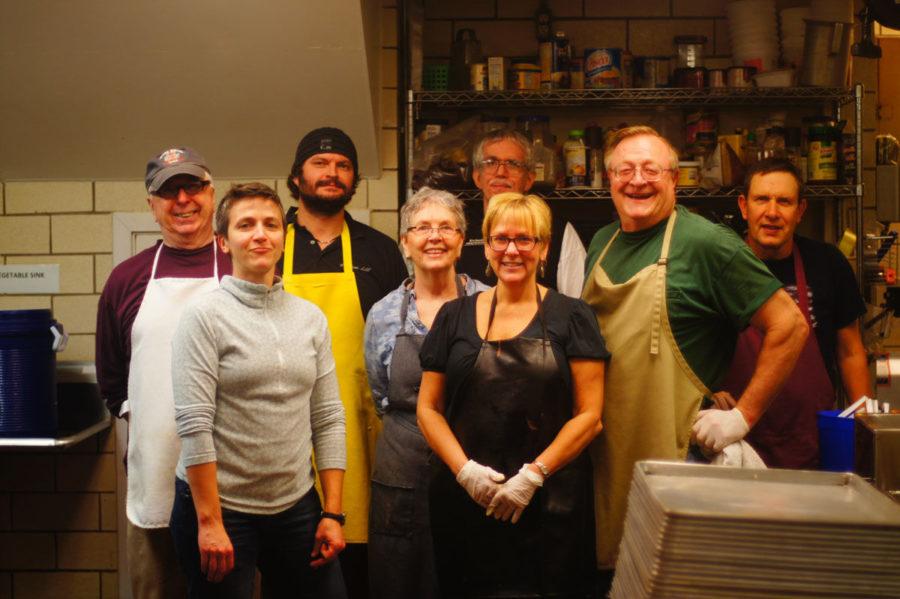 Ellen McDowell (center) stands with a group of volunteers as the director of the Daily Bread Soup Kitchen of 35 years.

Six months before shifting locations and turning off the burners for good at the New Covenant Fellowship, the Daily Bread Soup Kitchen was on an over 30-year run. Since its inception in 1980, the kitchen has helped fill up its guests with hefty portions of mostaccioli as a mealtime haven at its location at White and Randolph streets.

In those days, the kitchen served around 30 people on a busy day, said Ellen McDowell, president emeritus of the soup kitchen. Today, three locations and 35 years later, the kitchen is used to serve up to 10 times that amount of people.

Soon enough, the exodus of volunteers and guests alike will be following McDowell, as it has in the past, into the soup kitchen’s next home inside the old Emerald City Lounge building, located at 118 N. First Street in Champaign. Today’s 150 kitchen volunteer corp is made up of retired teachers, retired nurses, working professionals, doctors, housewives and students from the University and Parkland College.

It’s a sort of loyalty and commitment to helping others that McDowell has seen before from her volunteers, she said. Back in 2009 the Catholic Worker House, the kitchen’s second location, asked for the relocation of the soup kitchen after neighbors and nearby business owners expressed their concerns over the formation of a “Tent City.” The term refers to a self-governed low-income tent community that was formed in the Catholic Workers House’s backyard. McDowell said after the closing the kitchen’s volunteer staff faithfully followed suit.

“I had recruited most of the volunteers,” she said. “They were a committed group and, although only superficially aware of the catholic worker philosophy, had an intense loyalty to the work they were doing. They took the concern for the poor with them, and without being especially aware of it, the philosophy of personalism.”

This philosophy is one McDowell has learned and practiced for most of her life.

As a young girl during the Great Depression, it was her mother’s and other housewives’ affection and generosity toward the “Knights of the Road” that ignited McDowell’s urge to help the less fortunate. The “Knights of the Road” was a group of unemployed men who would travel from town to town seeking work during the Depression; she recalls seeing these men sit on the back steps of her home with a cup of coffee in hand and a plate of food.

It’s the reason McDowell has played a big part in refusing to let the soup kitchen become eradicated.

Despite set-backs and the opposition of the some local community members who believe that guests of the soup kitchen have the potential to become disruptive and abusive of drugs and alcohol, McDowell continues to channel her experiences into her work.

“That (urge to continue) might well find its source in my memories of the painful epidemic of homelessness, hunger and rootlessness during the Depression years,” she said.

As the Soup Kitchen was in the process of getting the paperwork done to move to its next location on First Street, Champaign City Council members found a loophole in the city’s zoning policies to be able to grant the soup kitchen its own location for the first time in its history despite stark opposition from the neighboring businesses.

“Once the council had decided that we could be a restaurant that does not charge, they allowed us to move wherever we wanted. Businesses on First Street had serious concerns and they even formed a sort of coalition,” said Richard Gomperts, liaison to the Daily Bread Soup Kitchen. “Eventually the council saw that the value of having a soup kitchen in Champaign outweighed the other concerns.”

The Daily Bread Soup Kitchen has become a local institution that not only offers guests a warm meal, but a form of agency as well.

It offers ID replacement services, provides bus passes and a referral assistance programs all in attempts to “lift” guests into independence, McDowell said. All of it is done without the use of government-aid.

“One of the things we feel that the soup kitchen does being available in Champaign is that it’s someplace where people go that are being taken care of that otherwise would just be doing whatever,” Gomperts said. “Whatever could be more trouble anyway.”

In his three years of experience at the soup kitchen, Gomperts said he has seen himself become more enlightened about the struggles of his homeless and underprivileged contemporaries.

“I know in my case, I’m a computer operator, and I sit in a room by myself all the time, and I would never have met folks like that, who are struggling in this way,” Gomperts said. “I’ve felt like it’s given me some life experience that is really valuable like that to learn to see how it is that people can live under situations like that, how they approach it and to know that ‘hey, that’s kind of a hopeful aspect to human interaction … that you can make it through.’”

As the kitchen prepares to make its $400,000 relocation in the coming months, McDowell will help usher in a new era for the kitchen with the same kind of “help your neighbor” philosophy that has been a mainstay of the institution since its creation.

“If the value of a community can be assessed on how it treats the most vulnerable within it, we want our community to shine,” she said. “Our hand is out only for confirmation that the community understands the phenomenon of Daily Bread, values it and wants to guarantee its continuation.”