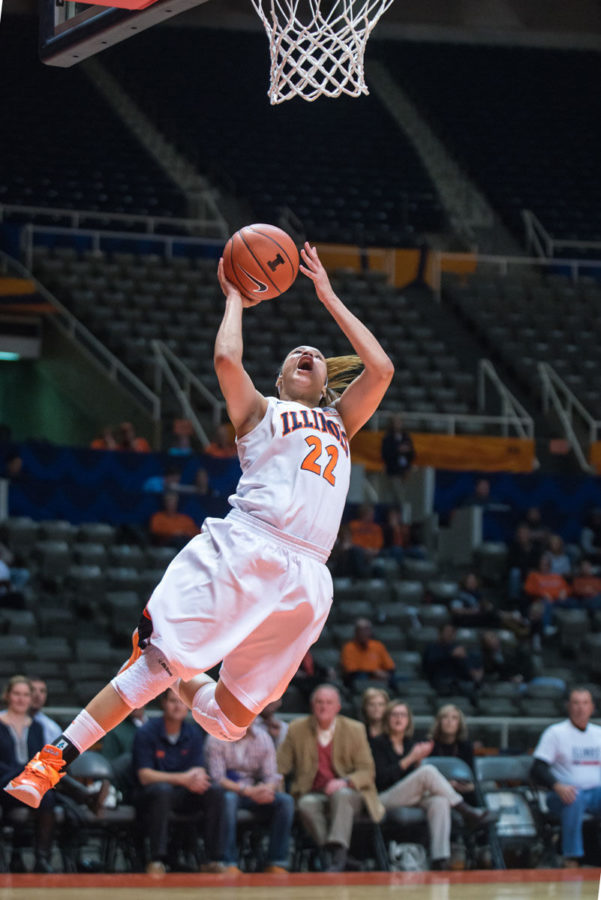 Illinois’ Ivory Crawford goes for a layup after making a steal during the game against Virginia at the State Farm Center on Dec. 3. The Illini are currently on a five-game losing streak.

It’s easy to point at senior guard Ivory Crawford’s absence as the reason for the Illini’s current five-game skid, but Illinois’ tendency to fall behind early in games continues to be a major factor in its losses.

“We just haven’t played well in the first half,” head coach Matt Bollant said after Monday’s loss to Michigan. “We’ve got to figure out how to do that and bring that energy and that joy and excitement. We need more.”

In their loss to the Wolverines, the Illini fell behind by as much as 19 points early in the first half and went into the locker room trailing by 15. The Illini ended up winning the second half 33-31, but were in too deep of a hole to climb out of in the late going. Except for the loss against Nebraska that began the losing streak, the first-half woes have been a trend for the Illini.

Once the horn sounds for the second half, though, Illinois has played like a completely different team. With the exception of Maryland, the Illini have outscored three of their last four opponents in the second half despite trailing big in the first half. In its last four games, Illinois’ second-half shooting percentage has risen to about 40 percent from the field and 33 percent from beyond the arc, both near 10 percent increases from its first half numbers.

In its most recent win, Illinois trailed Iowa by as much as 14 points early on and had to battle back in the second half to seal a 73-61 victory. Bollant has said that he likes that his team never quits, but wants cleaner first halves.

Following the loss to Purdue earlier in the season, during which Illinois fell behind by 10 in the first half, freshman center Chatrice White spoke on the importance of coming out with better starts, especially for herself.

“I’ve just got to come to the game mentally prepared just to start the game like I have been in the second half,” White said. “It’s pregame jitters, maybe.”

With three underclassmen currently in the starting lineup, pregame nerves and adjusting to the game early on may be an issue for Illinois. Recovering ahead of schedule, Crawford could be back as soon as Sunday and will try to help stabilize Illinois’ first half offensive woes.