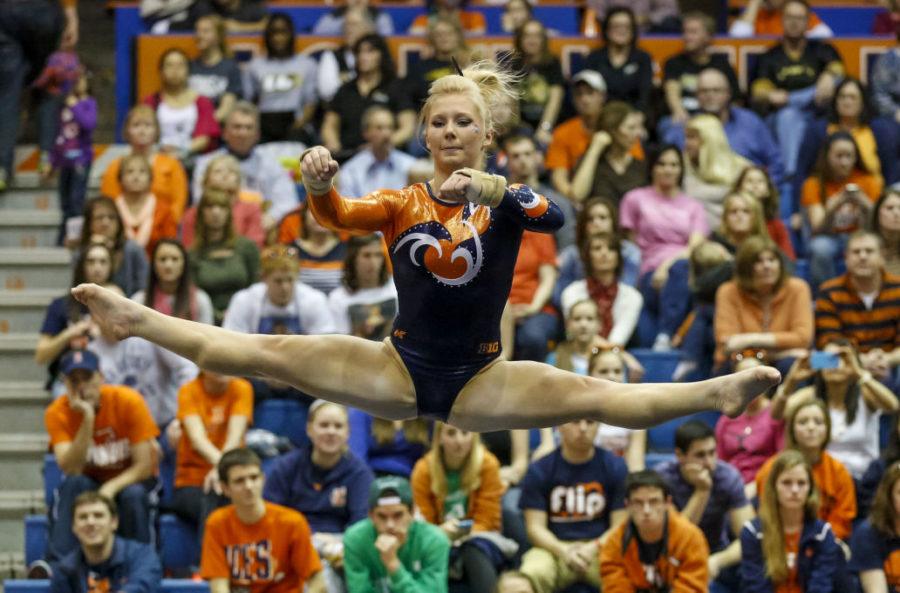 One white blood cell held the fate of Erin Buchanan’s heart and soul.

The night before one of Erin’s biggest gymnastics meets of her junior year of high school, her mother, Jane, was rushed to the hospital. Jane just had her first chemotherapy treatment after being diagnosed with breast cancer, and that white blood cell was the only thing keeping her alive. A white blood count below 4500 is below normal for a healthy person, according to the National Institutes of Health.

It was at that moment Erin realized her mother was the reason for her success.

Erin labels Jane as many things: her mom, her best friend, her hero, her biggest fan, an incredible woman, a breast cancer survivor. But even though they have always been best friends, their relationship wasn’t always what it is now.

Growing up, Erin felt like more of a daddy’s girl. Having two brothers made her want to be one of the boys. With time, though, Erin and Jane grew closer. She learned to enjoy shopping with her mother, and they reached the point where they were the same size and could wear the same things. But those aren’t the only things they shared.

Erin’s competitive nature comes from her mother. Jane was a 5-foot-3 basketball player at Division III Christopher Newport University in Virginia, and she was one of the best players on the team. It taught Erin that “certain things don’t matter. You can be whoever you want to be, and nothing can hold you back from that.”

Erin’s start in gymnastics had nothing to do with her mother, though.

At first, Erin was a soccer player and swimmer. It wasn’t until later that she dropped the two sports to focus on artistic gymnastics.

Gymnastics has taken Erin far, as she is one of three all-around competitors on the Illinois women’s gymnastics team, but the sport didn’t come naturally to her. There was, however, no doubt Jane had her back.

“She was the most supportive parent about it, where if I had a bad day, she would say, ‘You know, I’m proud of you, but you don’t need to do it,’” Erin said.

At Illinois’ home opener against Rutgers on Jan. 17, Jane continued to prove her positive impact on her daughter. She was in the crowd watching, and it was her presence that helped Erin thrive.

When Erin spotted her mother in the crowd, she went out and earned her previous season-high on the balance beam. But that’s not the only instance in which Jane helped her daughter succeed.

It was the night before the 2012 Virginia Level 10 State Championship that Jane was rushed to the hospital, with that one white blood cell keeping her alive. That’s why Erin’s father was the only family member in attendance at the meet. Even so, it was Jane who got Erin through the competition.

When her father came back from the hospital the morning of the meet, he explained to Erin, “She wants you to do this so bad. She wants this for you.”

Erin wanted to compete for her mother, the person who always told her she could do anything. She wanted to prove her mother right.

“I think that’s the most valuable lesson a mom can teach their daughters: The sky’s the limit,” Erin said. “She did that for me.”

With a 38.075, Erin won the state all-around title, bringing tears to both of her parents’ eyes: her dad at the competition and her mom at the hospital surrounded by friends. Regardless of the outcome, though, Erin knew her mother would be proud of her.

Even though it’s Jane who has fought cancer, she has constantly thought of Erin throughout this suffering. Jane thought of her daughter and her meet while in the hospital, and she thought of Erin when she first received the news of her diagnosis, deciding not to tell her immediately.

“She knew that it would impact me more than my brothers only because I’m a girl, and at that point, I was — she was my best friend, my biggest fan,” Erin explained. “And the minute she told me, it didn’t hit me. It was more of, ‘What can we do to make her better?’”

There were no hard feelings about deciding to wait to tell her. Erin trusted her mother’s judgment.

“I wasn’t mad at her,” Erin added. “I was mad that this could happen to anyone.”

Soon after that, Jane had her head shaved. Erin wanted to show her support too. She asked her mother if she, too, could shave her head. Jane insisted her daughter leave her blonde hair as is, for it was “too pretty.”

That wasn’t the first instance Erin showed an instinct for breast cancer advocacy. She has been donating her hair since she was little, around 10 years old, when her parents stressed the importance of giving back and how it’s always the best thing to do.

That lesson combined with the experience of her mother fighting cancer has greatly influenced Erin’s life plans.

“I almost want to say that going through all of this has really helped me make the definite decision that I want to help kids with cancer of any kind,” she said.

Erin knows most about breast cancer, but she does her best to learn about other types of cancers because of her interest in the subject and desire to make a change. She even went as far as to say it’s her passion.

In that time, Erin has learned a lot, whether it be just growing into a more mature person with a positive outlook on life. She can’t even put the experience into words, but one thing is for sure: Erin would feel incomplete without her mother in her life.

“I’ve said it a million times, and I’ll say it again: I don’t think I’d be where I am today without my mom,” Erin said. “She’s my better half, to put it in simpler words.”