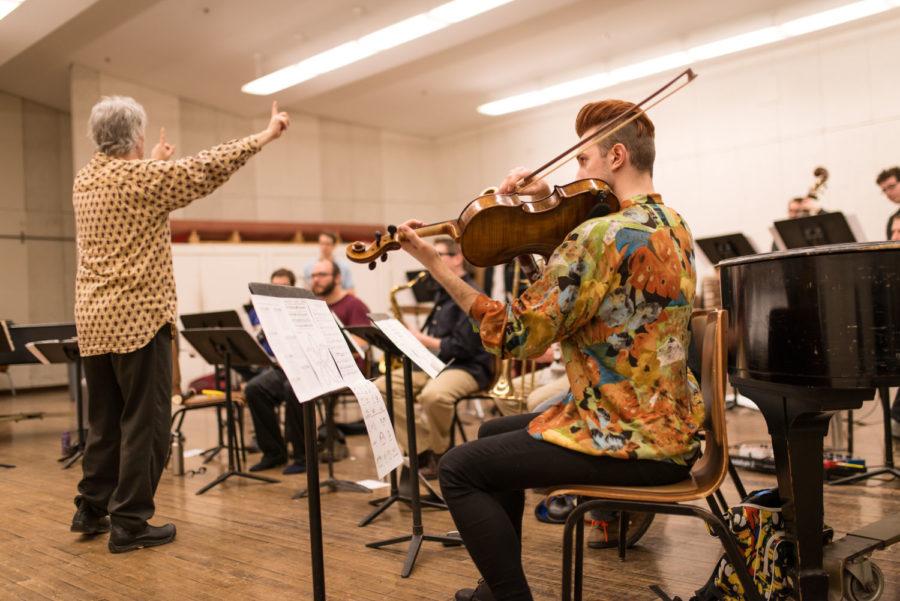 The Go: Organic Orchestra finds itself comprised of an eclectic group of individuals including students, members of the community, and professional musicians. Here, they are rehearsing at the Krannert Center for Performing Arts on Wednesday, January 28, 2015.

The Krannert Center for the Performing Arts will host a night full of music that reveals an assortment of colors, textures, images and storytelling. The concert will be led by composer and percussionist Adam Rudolph who is the current George A. Miller Visiting Artist. The Go: Organic Orchestra will embody a form of music that is for the mind, body and spirit.

“We are looking to have an exchange of feelings from one heart to another heart,” Rudolph said.

The University’s Robert E. Brown Center for World Music is thrilled to welcome back Rudolph, after a previous performance at the Krannert Art Museum, according to Jason Finkelman, director of global arts performance initiatives for the Center for World Music. During Rudolph’s last visit, he hosted an evening workshop for students, which allowed participants to explore his style of music. However, this time around, the Go: Organic Orchestra will consist of students who undergo a week-long workshop — which started on Monday — that leads up to a final performance. It welcomes a wide variety of musicians on campus that are willing to explore and practice conducted, improvised music.

“One of the beautiful things about this process of Adam’s is that he is open to establishing an ensemble that incorporates musicians from many different backgrounds,” Finkelman said.

The workshops begin with Rudolph teaching students his own conducting signals in preparation for the final performance.

“Adam has been successful in putting his own imprint on his process of conducted improvisation and is one of the principle people practicing it now,” Finkelman said.

Carmen Rast, sophomore in Social Work, also feels fortunate to be a part of the Go: Organic Orchestra and to be able to experience Rudolph’s teaching style.

“It’s cool to get his point of view on teaching,” Rast said. “When he took us all aside and taught us all these rhythms, it was really interesting to see how he teaches someone to play improvised music because it is something that is so hard to teach.”

Feeling fortunate to have had influential artists, such as the trumpeter Don Cherry, impacts him greatly. Rudolph said he felt like it was his time to share his experiences with others. Therefore, in 2001 he began practicing conducted improvised music leading him to create the project.

He said he believes music coming from the body, mind and spirit is an oral tradition, where older musicians should share their knowledge with younger musicians.

“What I love about conducting the Go: Organic Orchestra is encouraging the musicians to cultivate their imagination,” Rudolph said. “I love seeing everyone blossom in the process of developing their music individually, but also in the context of the collective.”

Since the project’s inception, Rudolph has introduced it to various groups of musicians around the globe. From Sicily to Denmark, the Go: Organic Orchestra has been able to gather different performers to create a unique, improvised sound.

“This is like a new vision of a 21st century orchestra,” Rudolph said. “The music is prototypical and is going to sound like itself. People should come prepared to hear something that they have never heard before.”

Rudolph said he believes that what makes the Go: Organic Orchestra unique is the fact that no one knows how the music is going to unfold. Unlike the traditional ways an orchestra operates, musicians get to participate in what is happening in the music in Rudolph’s orchestra.

“There is a philosophical basis for this because that’s the nature of how we live anyway. The future really doesn’t exist, and the past doesn’t really exist. They are concepts of the mind. All that really exists is what is in the moment,” he said.

He said he hopes the audience will be actively engaged as they join him on an adventure to see how the performance develops.

“It’s a really exciting opportunity because the audience gets to get on board with us as we create the music in the moment and not really know what’s going to happen next,” Rudolph said.

With praises from various critics such as LA Weekly and allaboutjazz.com, the Go: Organic Orchestra is noted to be an interesting presentation of “a blend of gentle sustained dissonance, heaven-crashing rhythm jams, and individual improvisations.”

“Hopefully, we inspire other people to become more creative themselves in whatever they do,” Rudolph said.

Robin can be reached at [email protected]