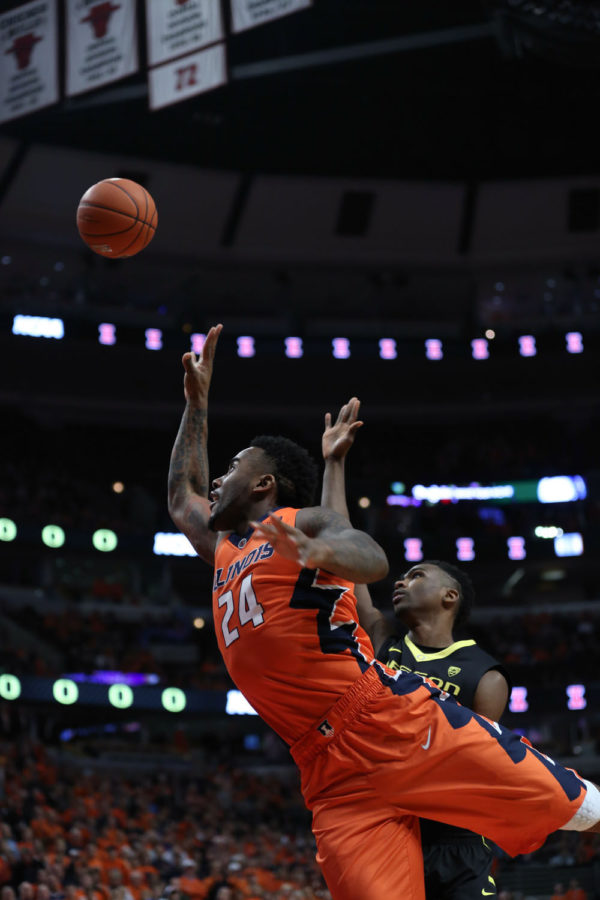 Illinois’ Rayvonte Rice attempts a shot against Oregon at United Center in Chicago on Dec. 13. Head coach John Groce said Rice could return Saturday against Penn State. The senior has not played since Jan. 3.

Illinois guards Rayvonte Rice and Aaron Cosby are both ahead of schedule in recovery from recent injuries.

Illini head coach John Groce said Thursday afternoon that Rice has been practicing in skill and non-contact situations. The senior guard suffered a broken hand during practice in early January and was the team’s leading scorer and rebounder at the time with 17.2 points and 6.9 rebounds per game.

Groce did not say Rice would play Saturday against Penn State, but he did not rule out the possibility of a return.

The head coach said Cosby has been practicing in non-contact drills this week during team practices as well. Cosby suffered an eye injury against Indiana on Jan. 18 and was expected to miss one to two weeks. Groce said Cosby will be elevated to full-contact in practice either Thursday or Friday and could play Saturday.

Illinois has lost five of its last eight games, and has been dealing with injury issues all season since losing senior point guard Tracy Abrams to an ACL tear before the year began.

The Illini have had the week off since Saturday’s 79-71 loss to Minnesota.