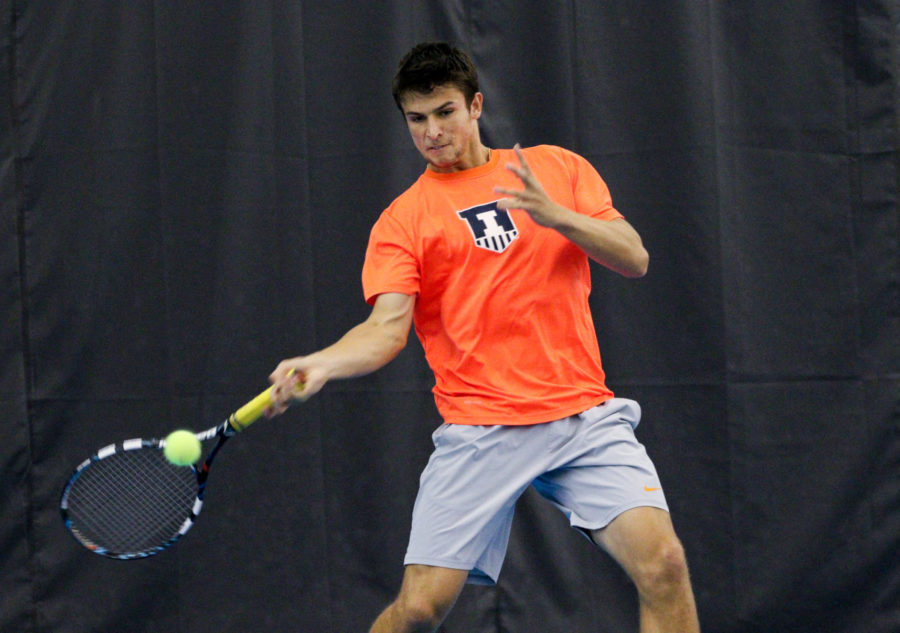 Illinois’ Aleks Vukic returns the ball during the tennis game vs. Green Bay at Atkins Tennis Center on Friday, Jan. 23, 2015. The Illini won 4-0.

Last year, the Illinois men’s tennis team’s first defeats of the year came in Durham and Chapel Hill, North Carolina, when the Illini faced Duke and North Carolina in back-to-back early-season dual meets. This year, the No. 8 Illini will face the No. 11 Blue Devils and the No. 6 Tar Heels at home in Champaign.

“We’re looking forward to some great matches,” head coach Brad Dancer said. “We know with the level of teams that we have coming here, there’s going to continue to be a great challenge this weekend.”

Last weekend, the Illini shut out two mid-major conference champions in Wisconsin-Green Bay and Ball State. This weekend’s opponents are a much different challenge. Duke and North Carolina are two of the top teams in the country and are coming off wins against quality competition. Both Duke and UNC spent last weekend playing in different ITA Kick-Off matches for a berth in the National Indoor Team Championships in Chicago. Illinois is hosting the event and receives an automatic entry.

Duke dominated one of the Kick-Off weekend’s toughest group draws to earn its spot in the tournament. The Blue Devils took down No. 19 Wake Forest 4-1 and No. 25 Memphis 4-0. They’ve also already beaten No. 27 Kentucky on the road this year.

Duke’s line-up sports one of the nation’s top freshmen in No. 18 Nicolas Alvarez. Alvarez is the current ACC Player of the Week after clinching Duke’s last two wins. He has eight wins against ranked opponents this year, including the Illini’s own No. 31 Jared Hiltzik at the ITA All-American Championships. Alvarez is the Blue Devil’s highest ranked player, but he’s been playing at No. 2 singles. That’s the spot Hiltzik played in last week, so a rematch could be in the works.

Duke isn’t the only team with an impact freshman. The Illini have a freshmen squad that looks to be immediate contributors for the team. No. 44 Aleks Vukic is undefeated in singles this spring and clinched the Illini’s comeback win over No. 6 Baylor last Wednesday in Waco, Texas. No. 62 Aron Hiltzik picked up two singles wins on Friday against Wisconsin-Green Bay and Ball State.

“All of our freshmen have been pushing the envelope,” Dancer said. “(They) force our upperclassmen guys to play well to keep their line-up spots.”

North Carolina advanced out of its Kick-Off Weekend group draw as well, downing Oregon 4-0 and No. 34 Viriginia Tech 4-1 to earn a spot in Chicago. Last week, Illinois faced one of the nation’s top players — No. 5 Julian Lenz of Baylor. North Carolina brings another this week with No. 2 Brayden Schnur. While Ross Guignon and Tim Kopinski took home second place at ITA Indoor Nationals in the fall, Schnur won the singles bracket. In last year’s match in Chapel Hill, Schnur handed then-No. 4 Jared Hiltzik his first singles loss of the season.

Facing the Blue Devils and the Tar Heels back-to-back will be a challenge for the Illini, who will have faced three top-15 opponents in two weeks. Dancer says that quality competition is essential to the Illini.

“We play elite competition all year long. That’s kind of our M. O. if you will,” Dancer said. “We want great teams coming here and just can’t wait to play these teams.

Christopher can be reached at [email protected] and on Twitter @ChrisKennedy_4.