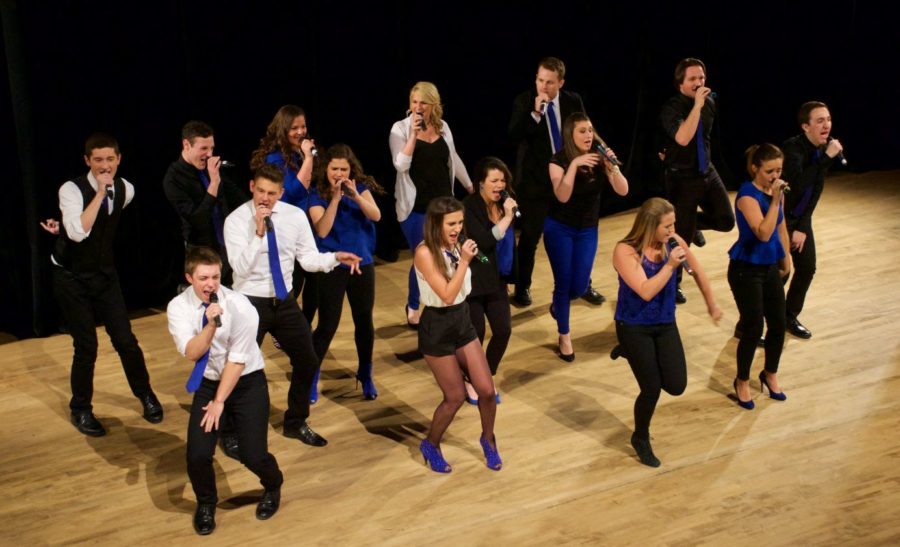 No Comment performs at the Midwest Quarterfinal of the International Championship of Collegiate A Cappella competition, which the group won, on Jan. 24.

Members of No Comment have had a note-worthy January.

From performing in a room of seasoned politicians and professionals at the Prairie Capital Convention Center in Springfield on Jan. 12 to winning the Midwest Quarterfinals of the International Championship of Collegiate A Capella just 12 days later, the group is hoping to continue its early success throughout 2015.

After failing to make it past the quarterfinals last year, the victory is especially meaningful because it marks the growth of No Comment as a competitor, said James Fletcher, public relations manager for the registered student organization and an employee of Illini Media.

But the victory gives the group the chance to go beyond the competitive realm of Illinois; it gives them the opportunity to prove it is the best a cappella group in the entire Midwest at the semifinals on March 14 — a challenge, Max Antman, executive manager of No Comment and senior in LAS, calls a “whole different animal.”

“It’s going to be a lot of work if we really want to get there and sound like we deserve to be there,” he said.

And it is this mentality that secured the victory against the nine other Midwest groups at the quarterfinals, Antman added.

“We just did our best and hoped that it was enough to win,” he said. “We never assume that we’re going to get anything.”

To get into this mindset, the members gathered into an “inspirational huddle” to calm their nerves and to exchange encouraging words before the big performance, said Lizzie Jassin, sophomore in DGS.

“Max had us all close our eyes, and he put us in the place of where we would be for the next 10 to 15 minutes. He had us take deep breaths and said, ‘Imagine seeing this, seeing that; you guys are going to kill it,’?” she said.

But what encouraged the group the most was Max’s emphasis on camaraderie, according to Jassin.

“(I said,) ‘Look to your left and to your right and there’s two people standing there who are smiling at you because this is your family, and we’re all here together and to have fun. So use the rest of the people in the group as kind of a protective blanket if you get scared,’?” Antman said.

And after the count of three, the group did its traditional hip thrust and walked out on stage to deliver its winning performance — despite the pressure of cameras rolling, the unfamiliarity of performing with individual microphones and having only a week and a half of “real practice,” Fletcher said.

The group preformed a medley of high-energy songs and heartfelt ballads, including “Bang Bang” by Jessie J, Ariana Grande and Nicki Minaj and a Jason Mraz rendition of “It’s So Hard To Say Goodbye” by Boyz II Men.

But once their performance was finished, there was nothing to worry about, Fletcher said. Not because he was certain they had won, but because he was sure they had performed the best that they could.

As for Antman, No Comment’s victory was no surprise.

“Once they announced second place, I knew that we won — without a doubt,” he said.

He said he even exchanged looks with another senior in the group before the group’s name was announced as a way to say that this wouldn’t be the last performance for them, which many seniors thought would be true.

To end the night, No Comment performed “Finale B” from the “Rent” musical as its encore song, which was the perfect way to end the competition, Fletcher said.

“The fact that it’s about a group of people who love each other really resonates well because that is exactly what No Comment is,” he said. “We’re all best friends and we all worked really hard.”

Stephanie can be reached at [email protected].