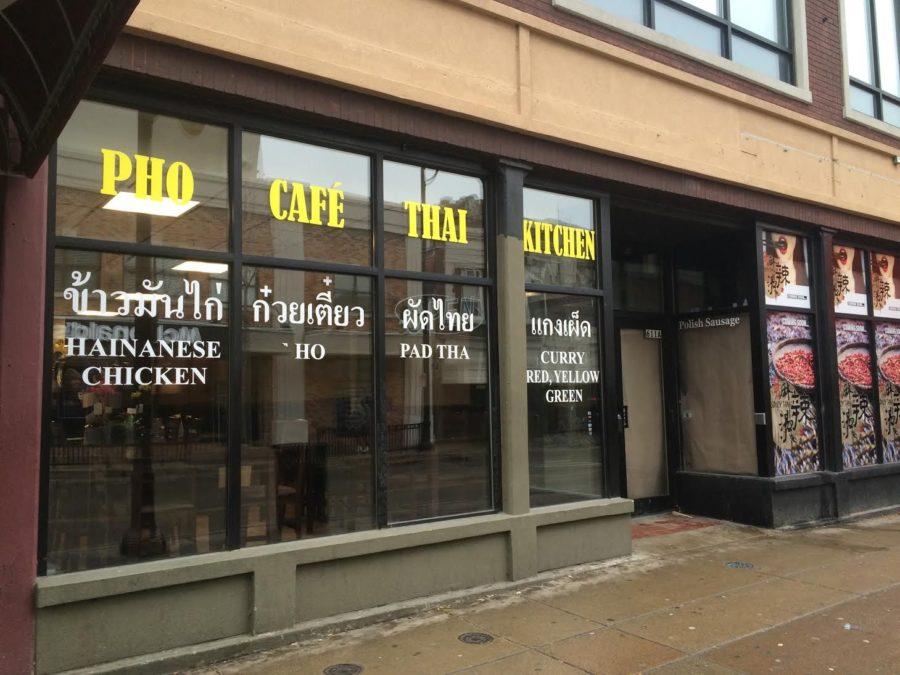 Pho Café & Thai Kitchen, located at 611-B E. Green St., is one of Champaign’s newest Thai restaurants after opening in late December.

Souphaphone Soutchay, who along with her husband, Seng Soutchay, co-owns Pho Café. The couple opened the restaurant with business partner, Sonchai Pounginjai, due to a craving for something new in their lives.

“My husband and I have been in the jewelry business since 2001 and wanted a new adventure,” Souphaphone said. “My husband saw this place for sale, so that was it for us. My partner (Pounginjai) worked for the Champaign Country Club for over 20 years, so he knows the food business. We knew that if we partnered with him we could be successful.”

The business marks the fourth and latest addition to Campustown Thai restuarants, including Basil Thai, Bangkok Thai and the Y-Eatery.

In addition to dine-in, customers can also pick up their orders or place an order for delivery.

For appetizers, the restaurant has a variety of rolls, crab rangoon, chicken satay and deep-fried tofu. It also has three different kinds of soups, including chicken-based Tom Yum Gai and Tom Kha Gai and a shrimp-based soup called Tom Yum Goong.

Despite the Thai theme to the majority of the menu, Souphaphone said the restaurant specializes in the cuisine it is named after, Pho, which is a Vietnamese soup.

“We make a beef broth and simmer it for at least eight hours. Once that’s done, we use fresh noodles and incorporate different kinds of meat. To garnish it we have both white and green onions,” Souphaphone said.

Souphaphone explained that Pho has been the restaurant’s most popular dish since its opening.

For those who prefer their food to have a kick, Pho Café has a wide variety of spicy dishes, according to Souphaphone. Pad Ka-Pow is a spicy Thai basil stir-fry, while Pad Ma Kua Yao is a spicy eggplant stir-fry. A selection of fried rice is also available.

“We can adjust the spiciness of a dish,” Souphaphone said. “Nobody is ever going to walk out the door saying ‘I can’t eat,’ because we can always adjust. Even people who haven’t tried Thai food should try it.”

“I heard it was good from someone else, so I decided to try it for myself,” said Katie Domines, senior in AHS, who was eating at the restaurant for the first time Jan. 27. “I don’t eat Thai food often, but I would come again.”

In addition to Pho, the restaurant offers curry and different types of Thai noodles. As far as entrees, Pad Ped, a Thai stir-fry with curry, ginger stir-fry, cashew-nut stir-fry, and Khao Mon Gai (chicken with rice), are among the many dishes offered on the menu.

Maddie can be reached at [email protected]