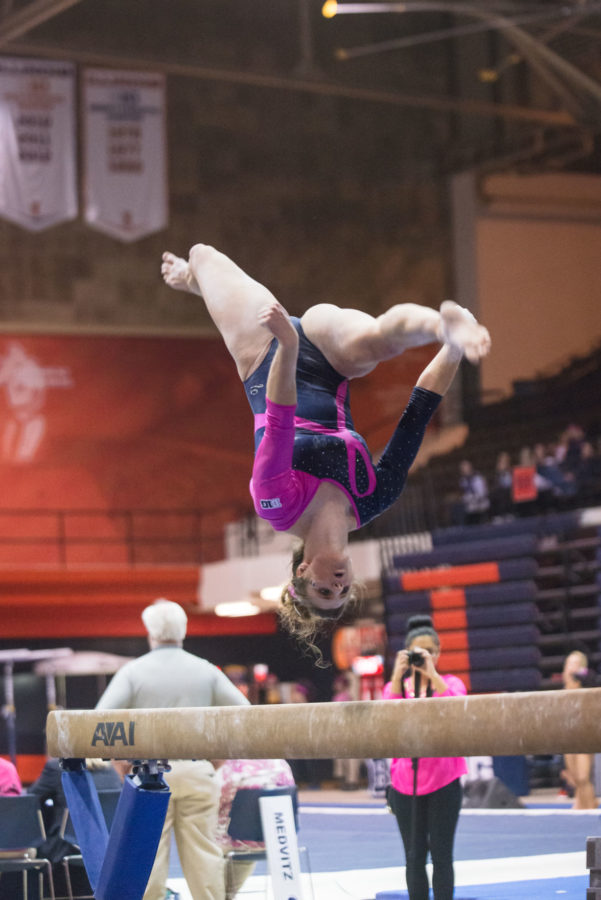 Illinois’ Mary Jane Horth performs a routine on the balance beam during the match against Penn State at Huff Hall on Saturday, February 1, 2015.

Sophomore Erin Buchanan looked to her left while answering a question. She spotted her teammate and classmate Mary Jane Horth messing around on a men’s apparatus after a Tuesday practice.

“What is she doing? P-bars?” Buchanan said with a laugh.

Appropriately, Buchanan made the observation upon being asked about what’s it like having not just Horth, but sophomores Suren Kanchanavaleerat and Sarah Lyons as both teammates and classmates.

As freshmen, only Buchanan and Horth had the chance to sport orange and blue leotards during competitions for the Illinois women’s gymnastics team. The other two, Kanchanavaleerat and Lyons, were sidelined with injuries and missed their freshmen seasons.

Kanchanavaleerat, a walk-on from Vancouver, Washington, dislocated her right knee cap right before her freshman year. She had surgery so her muscles would hold her knee cap in place, but it required an eight-month recovery period.

“It was a disappointing start, because I obviously wanted to get into things and compete for the team,” Kanchanavaleerat said. “But it was what it was.”

Over a year later, the walk-on sophomore is back in the gym training, working her way into the lineup.

She made her Illini debut Jan. 25 in a 196.85-195.475 loss to Michigan. Kanchanavaleerat anchored Illinois’ vault lineup and earned a 9.225. Her score didn’t count toward the team’s event score, but she said it was still an exciting experience to be in the actual competition.

The Saturday prior, at Illinois’ Jan. 17 home opener against Rutgers, Kanchanavaleerat received the opportunity to exhibition on the event, to get a feel for what the NCAA competition atmosphere was like. Exhbitioning is performing without receiving official results, and she said it helped her mentally prepare for her debut and see where she needed to improve.

Kanchanavaleerat wasn’t the only sophomore to make her debut this season, though.

On Jan. 11, at Illinois’ season opener at Central Michigan, Lyons officially began her Illinois gymnastics career. It was a strong start, too, as Lyons took home the uneven bars title — scoring a 9.850.

This came after Lyons sat out her freshman season with a torn labrum in her left hip. The injury occurred prior to Lyons’ arrival at Illinois, but no one had been able to pinpoint what caused it or the exact date of the injury.

“Over time, it started to lock up, so then they were thinking, ‘Well, something may be wrong with it,’” Lyons explained. “The University actually flew me out to St. Louis to get surgery by the best hip surgeon in the country.”

The recovery period was three to six months, and it took Lyons about six to make her way back to the gym. She’s healed now, a consistent competitor for the Illini, competing on bars for every meet so far and on vault in all meets following the first.

Horth was in a similar place last season, too, as she came into her freshman season with a torn left Achilles. She suffered the injury in May 2013 at Junior Olympic Nationals, her last club meet. But Horth never even had a chance to compete, as she tore her Achilles doing a double-back pass on floor with about two minutes left in warmups.

“I had about a year recovery,” Horth said. “But just throughout that whole time, I gained a lot of wisdom and respect for the sport, just being out.”

Her recovery was shorter than expected, though, as Horth made her collegiate debut on Feb. 21 at the State of Illinois Classic. The Akron, Ohio, native started out just competing on bars before making the balance beam and vault lineups for the final four meets.

Now, Horth is one of three all-around competitors for Illinois. She won her first collegiate title in the event against Rutgers. On Saturday, Horth achieved new career highs in the all-around (39.425) and on uneven bars (9.925). Her career high on bars also her earned first place for her first collegiate event title, but Horth isn’t the only sophomore to achieve recent success.

Buchanan joins Horth as a new all-around competitor. The Haymarket, Virginia, native improved her all-around scores in the first three meets, but it took some work.

Of the four sophomores, Buchanan was the only one able to contribute at the start of her Illinois career. Last season, she competed on floor and vault in all 14 of Illinois’ meets. Buchanan didn’t have to recover from an injury to make a larger impact, but said she still needed to work on beam.

“Beam has always been at the bottom of my list, but it’s definitely been the event that never seemed to come naturally in any aspect for me,” Buchanan said. “But, once I got here, (head coach Kim Landrus) and I really altered technical aspects of my skills and got some new skills, so I could become a contributing factor on that event.”

Buchanan’s experience with her classmates has changed now that they’re all able to compete, but it’s for the better. She knows she’s just one part of a strong class that she loves.

“The fact that I, personally, get to spend four years with them, it almost brings tears to my eyes,” Buchanan explained. “Because they become, not only your teammates and your best friends, but they become like your sisters.”

Ashley can be reached at [email protected] and on Twitter