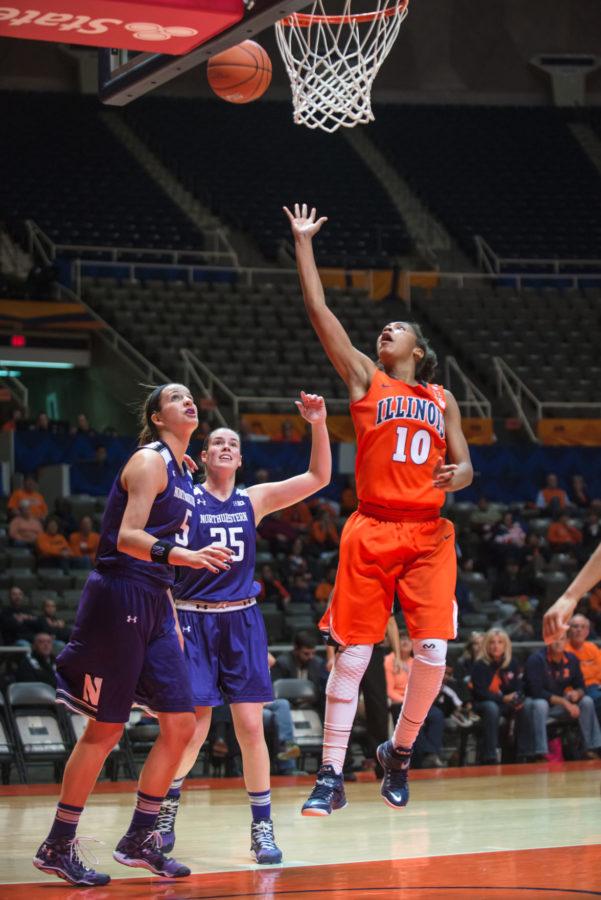 Illinois’ Amarah Coleman attempts a layup during the game versus Northwestern at the State Farm Center on Jan. 22.

There isn’t much going right for the Illinois women’s basketball team right now. Currently on a seven-game losing streak, the Illini are just one loss away from being in the cellar of the Big Ten. You wouldn’t be able to tell that from their energetic practices, though, and emerging from these high-intensity exercises are players ready to prove themselves off the bench.

Head coach Matt Bollant usually isn’t very committal when it comes to who he expects to see minutes off the bench, but after a good-spirited practice on Tuesday, he was quick to name freshman guard Amarah Coleman and sophomore guard Ashley McConnell as the first two options off the bench moving forward. The former has provided quality minutes all season, and with senior guard Ivory Crawford back to take her spot in the starting lineup, Coleman will be a needed source of consistent play off the bench.

While Coleman is already proven, McConnell is a relatively new addition to this season’s bench rotation after stringing together a few quality showings.

“It’s exciting to get an opportunity, because we all work so hard in practice,” McConnell said. “So to be able to go out on the court and do what we’ve been doing in practice is always exciting.”

Over her the last three games, McConnell has nearly doubled her total playing time for the season, averaging over 27 minutes per game throughout that stretch. She is 5-for-5 from 3-point range during that span, but attempted just one shot in 29 minutes of play at Nebraska. In fact, McConnell is 8-for-10 from beyond the arc in her limited playing time this season, so Bollant said she has the green light heading into Thursday’s game against Minnesota.

“We have to keep asking her to shoot more,” Bollant said. “There aren’t too many players you have to ask to shoot, but we want her looking for her shot. She’s a really good shooter and we just want her being aggressive.”

McConnell started eight games toward the end of last season, and in her final six games during that span, she knocked down 15-of-35 3-point shots after beginning the season 0-of-16 from downtown. McConnell averaged almost eight points per game during the final stretch of last season and even earned the team’s co-Most Improved Player award along with sophomore forward Jacqui Grant.

“She’s gotten so much more aggressive and she’s trusting her shot,” Grant said. “She just has to trust herself and trust that we all trust her. We want her to shoot the three when she’s open because she can knock that down.”

McConnell said starting games toward the end of last season helped her gain more confidence, but sitting on the bench for the majority of this season has also helped her read the game better once she does see time on the court.

As a player who may be dealing with confidence issues on the court, McConnell said that the positive environment her teammates provide has paid dividends.

“They’re really good at motivating us and bringing a lot of energy, which is what we might have lacked a little bit last year,” McConnell said. “So it’s exciting to have them on the court. I think I just need to do what I do best and be aggressive.”

Bollant said he thinks McConnell’s confidence and comfort will grow as she sees more time on the court, so if she can continue to earn consistent minutes, Illinois could see more and more shots falling.

Joey can be reached at [email protected] and on Twitter